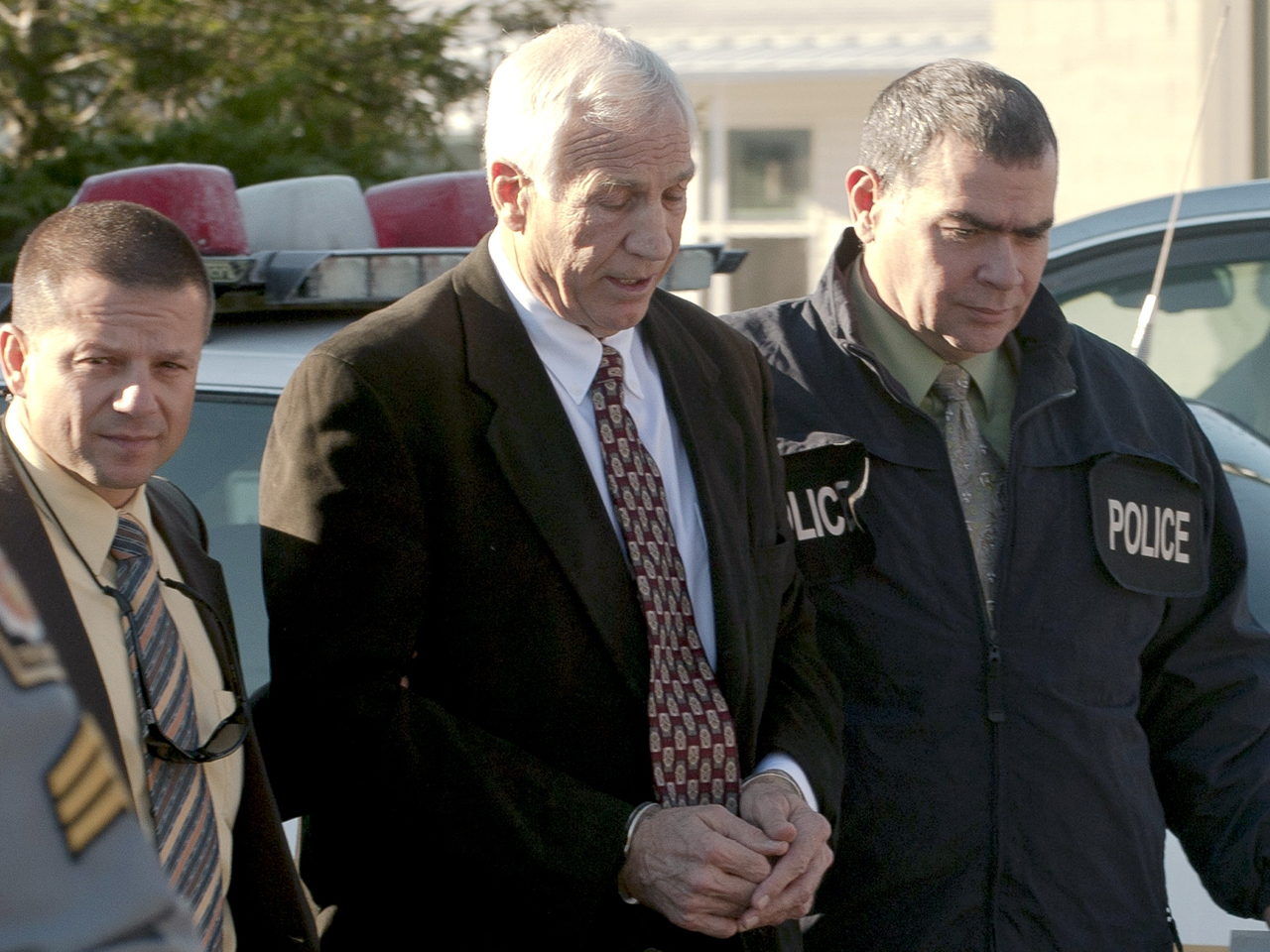 The grand jury presentment accusing former Penn State coach Jerry Sandusky of being a sexual predator of young boys from a youth charity he helped found is a graphic telling of repeated serial assaults on victimized children.

In the presentment, "Victim 1" first came into contact with Sandusky via The Second Mile, a charity for disadvantaged youth. At about age 12 or 13 the boy first met Sandusky, and claims being sexually abused by him beginning in 2005 or 2006, after being offered gifts such as clothing and NFL game tickets.

The boy showed "courage" that others - including adults in positions of power at the university - did not in dealing with Sandusky, a revered former coach who still had access to campus facilities, Michael Gillum, the victim's psychologist, told USA Today.

"Had this individual not come forward, this investigation may not have happened. Who knows how many people he saved from abuse?

An investigation by the state attorney general's office began in early 2009 after a teenage boy ("Victim 1") told authorities that Sandusky inappropriately touched him several times during a four-year period.

The graphic presentment tells of Sandusky fondling the boy and repeatedly sexually assaulting him when the boy stayed in the basement at Sandusky's home. Sandusky also visited the boy at his school, calling him out of class for unmonitored time in a conference room. (As a volunteer coach Sandusky had unfettered access to the school.) A wrestling coach at a Clinton County high school testified that he discovered Sandusky and the boy lying together on mats in a weight room after hours; Sandusky claimed that he and the boy were "working on wrestling moves."

An assistant principal who characterized Sandusky as "very controlling" in his mentoring relationships with students - as well as "clingy" and "needy" when a student broke off contact - said Sandusky was barred from the school district after Victim 1's mother called to notify the school, and authorities were contacted.

Phone records show 188 phone calls place by Sandusky to Victim 1's home between January 2008 and July 2009. The boy, who did not want to engage in sexual contact with Sandusky would ask his mother to tell the coach he was not home. The boy eventually told school officials there was "an issue" involving Sandusky but would not clarify.

A school official reportedly informed the boy's mother of Sandusky's reputation in the community and, Gillum recalled, described the coach as having "a heart of gold." The mother reported her concerns to the Clinton County Children and Youth Services where Gillum worked.

Gillum said after his discussions with the victim he assembled a report which he referred to state youth authorities and state police.

"Had it not been for this individual, my guess is that none of this (Sandusky probe) would have happened," Gillum told USA Today.

How far back go the allegations of abuse - and the tendency to ignore them?

According to the presentment, Sandusky's sexual assault on Victim 2 occurred several years earlier than Victim 1, in 2002. In that case a graduate assistant discovered Sandusky and a boy approximately ten years of age engaging in sexual activity in the shower room of the Lasch Building on the Penn State campus. The assistant notified head coach Joe Paterno, who contacted other Penn State officials.

The witness was later told that Sandusky had been reported to The Second Mile, but University Police never interviewed the graduate assistant, who was never questioned until he testified before a grand jury in December 2010.

Victim 3 testified that he met Sandusky in the Summer of 2000, when he was between seventh and eighth grades, and was repeatedly abused. Victim 4, according to the grand jury's findings, was "singled out" by Sandusky in 1996 or 1997, when the boy was in his second year at The Second Mile program.

Victim 5 testified that he first met Sandusky in 1995 to 1996, when the coach began inviting him to football games and engaging in "inappropriate" behavior with the boy when he was between 8 and 10 years old.

The abuse of Victim 6 dated back to 1994 or 1995 - Victim 6 testified that Sandusky's interactions with him overlapped with Victim 5, whom he knew. When the mother of Victim 6 kleanred that he had showered with Sandusky she reported it to University Police, who initiated an investigation. When the county's then-district attorney decided there would be no criminal charges, the director fot he campus police ordered the investigation closed.

The mother of Victim 6 then confronted Sandusky twice and, with detectives of the state College Police eavesdropping, demanded that he promise never to shower with a boy again; Sandusky would not. When told he could no longer see Victim 6 Sandusky said, "I understand. I was wrong. I wish I could get forgiveness. I now I won't get it from you. I wish I were dead."

Victim 7 testified that his interactions with Sandusky which began in 1994 "made him uncomfortable," including Sandusky cuddling him when he stayed at his home and some "blurry memory" of contact with Sandusky in a shower room. While he had no contact with Sandusky for two years, Victim 7 he received phone messages from Sandusky, Sandusky's wife and a Sandusky friend just prior to his grand jury testimony - calls Victim 7 did not answer.

In Fall of 2000 a janitor observed Sandusky performing oral sex on a boy, Victim 8, in the showers of the Lasch Building. The boy was described as being between ages 11 and 13. The janitor, a temporary employee was described by his supervisor as "very emotionally upset" and "very distraught" when informing him of what he'd seen. But no official report was made, and the identity of Victim 8 is unknown. The janitor now resides in a nursing home suffering from dementia, and is deemed incapable of testifying.

Sandusky was indicted on dozens of counts of child sexual abuse on Friday, November 4, 2011. He turned himself in to authorities and was released on $100,000 bail. Two other Penn State administrative officials - Penn State athletic director Tim Curley, and Gary Schultz, the school's vice president for finance and business - were charged with perjury and failure to report a sexual assault on a child. They are released on $75,000 bail each.