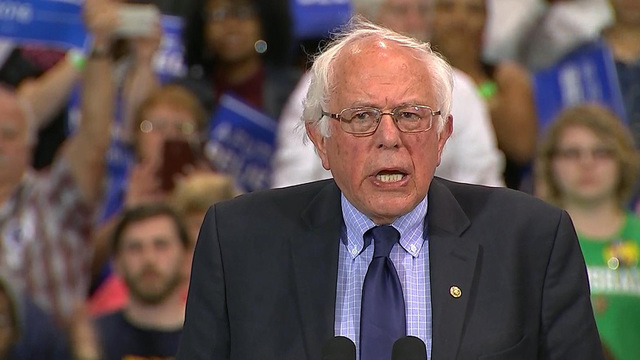 SPRINGFIELD, OREGON -- Bernie Sanders called out the Democratic party for lacking a "50-state strategy" and failing to purport a cohered message "about which side they are on," and insisted that he is the best candidate to take on the Republicans in November.

"We need to plant the flag of progressive politics in every state in this country," Sanders said at an outdoor rally here Thursday afternoon.

Sanders pointed out that Democrats do well in New England, the East Coast, the West Coast, and some states in the Midwest. But he believes that is not enough.

"That's fine, but you can't turn your back on working people and low income people and children and the poor in 25 states in this country. We've got to fight for every one of those states," Sanders said.

When Howard Dean, a fellow Vermonter, was chair of the Democratic National Committee, he likewise pressed for a 50-state strategy, which proved to be a rousing success when his party reclaimed Congress in 2006.

"A lot of campaigns when they get through the primary and go into the general election nowadays compete in six states, the swing states. So if people are only campaigning in the purple states they are only campaigning to those swing state voters and not caring about what the whole country needs," explained Nicholas Engel, who has been volunteering with the campaign, from state to state, for months.

In terms of messaging, Sanders highlighted the need for a coherent progressive Democratic agenda. He said the reason Democrats are losing elections at the state and local level is because the Democratic party is not clear about what side of the issues they are on.

Without mentioning Clinton by name, Sanders said that politicians cannot be for Wall Street and working people at the same time.

This is the latest in a series of Sanders speeches that has focused on the Democratic party platform more broadly. It is a message that resonated with the crowd of over 8,000 in Oregon.

Engel does not believe that this focus on the Democratic party means that Sanders is shifting away from a focus on winning the nomination.

"I think what he is trying to do is ensure that Hillary doesn't win the nomination," Engel said. "If it goes to a floor vote all the super delegates are going to have one question on their mind -- who is the better candidate to defeat Donald Trump?"