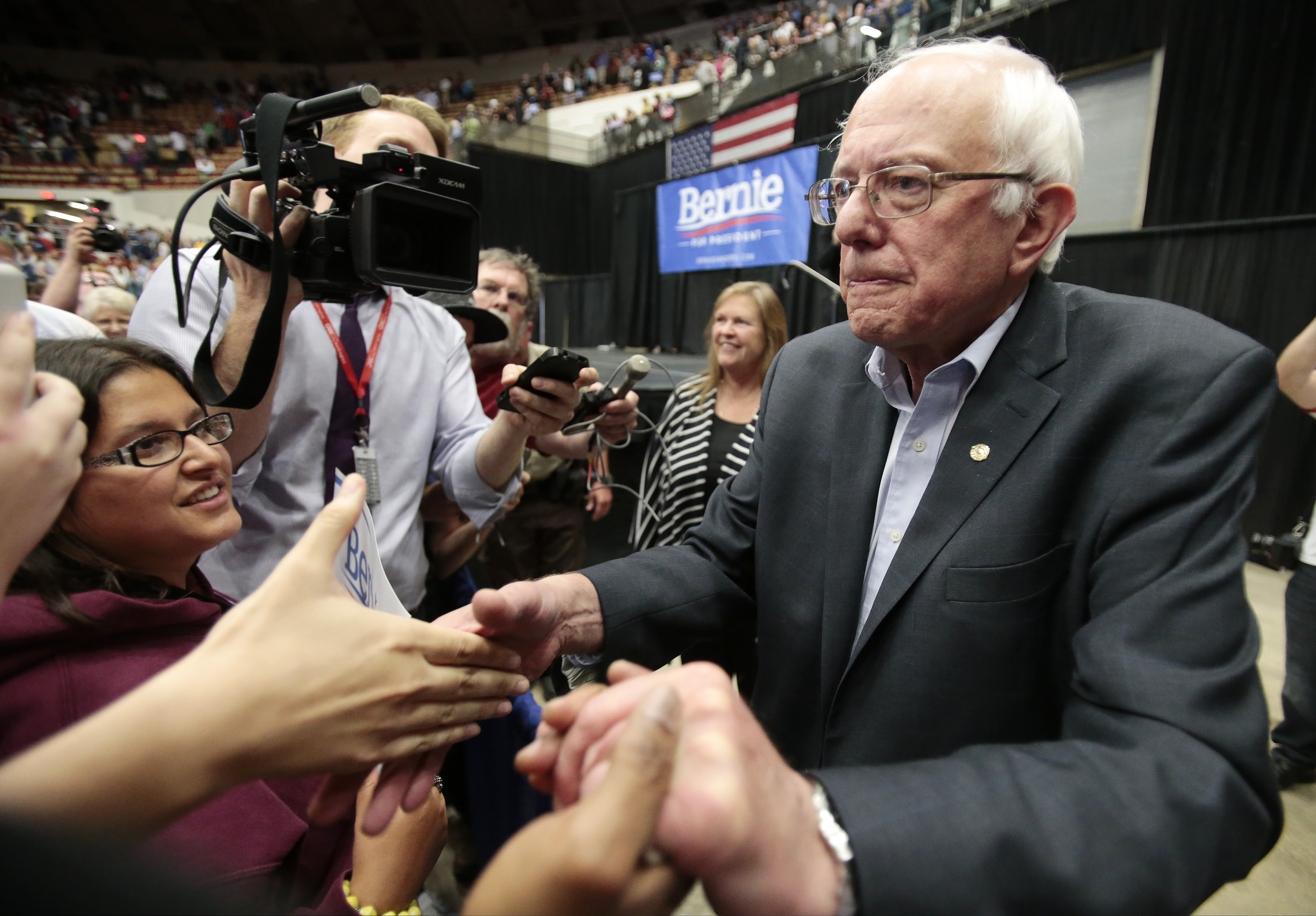 NEW YORK -- Bernie Sanders is no stranger to a large crowd. The Vermont senator has drawn tens of thousands of supporters to rallies across the country in recent weeks to hear his populist message. But on Wednesday night, the crowd was bigger than ever.

"Enough is enough," Bernie Sanders said, repeatedly, as he laid out his agenda.

Sanders was speaking from small podium at an organizing party in Washington, D.C., but his words were streamed live to thousands of other gatherings across the country. One was at a beer hall in Brooklyn's Park Slope neighborhood.

With the video projected on a large screen, about 200 of Sanders' supporters listened intently as they sipped beer out of plastic cups and snacked on oversized pretzels. The gathering in Brooklyn, formally named "Brooklyn Feels the Bern," was one of more than 3,500 events across 50 states Wednesday evening. By mid-afternoon, more than 100,000 people had signed up to attend one in their area. Altogether, the gatherings signified an important transition for the Sanders campaign from calling for a "political revolution" to actually mobilizing one.

"What we're looking for is tens of thousands of people willing to go the extra mile," said Sanders' digital director, Kenneth Pennington, in an interview last week, "not just to get Bernie Sanders elected, but to start a grassroots movement that really changes the country."

It's a movement that Sanders references in every speech on the campaign trail and one that seems plausible, given the size of the crowds that have turned out to see Sanders speak in Denver, Portland, Maine, Phoenix and Kenner, Louisiana. But there have been questions raised about Sanders' ability to turn interest into action, and keep up with the organizing will of Hillary Clinton's campaign. Clinton's campaign organized volunteers for its first "Day of Action" in early voting New Hampshire a month ago, and has already committed a supporter in each of Iowa's precincts.

But many who attended the Brooklyn party said they left feeling energized.

"This is a real movement, honest and true" said Ryan DelMastro, 20, a political science student who has a summer internship in Brooklyn. "I've never felt that from another politician."

DelMastro said he would sign up to volunteer when he was back at home in Connecticut, or back at school in Massachusetts. He said he was particularly inspired by Sanders' message on raising the minimum wage.

"I have a lot of friends who can't do internships" for free, he explained. "They can't afford to not be a manager at Dairy Queen."

Axel Jensen, 25, a geotechnical engineer who lives in Brooklyn, said he has been following Sanders closely. Though Sanders didn't offer any new policy ideas in his short simulcast, Jensen said he made him feel change is possible.

"I'm planning on doing whatever I can to get him elected," he said, "however possible that is."

The attendees were given an option to help Sanders' campaign as soon as they arrived at the beer hall by filling out a voter registration form and registering as a Democrat. Handouts distributed to those who gave their e-mail addresses and zip codes described different teams that volunteers could join, like the "ground team" for canvassing, or the "targeting team."

"I signed up for the parade," said Manon True, 57, referring to the upcoming West Indian-American Day Carnival in Brooklyn where Sanders supporters plan to gather. "I've never done that in my life."

True, whose father was a political organizer in his native Canada, said her sense of political activism that she inherited has been "dormant" for years.

People like True, DelMastro and Jensen will become valuable assets to Sanders and Pennington said that the campaign plans to use the teams assembled on Wednesday for constantly evolving tasks as the election grows closer.

The idea for the simultaneous organizing parties and webcast came from Sanders himself, who has long emphasized engaging his supporters directly. The response, however, exceeded Pennington's expectations. While the events were concentrated on the East and West coasts and in Democratic strongholds like San Francisco, Pennington said he was surprised to see events also pop up in states like Louisiana, Georgia and Texas, where one host, Matthew Hancock from Fort Worth, smoked a fifteen-pound beef brisket to serve at his meeting.

Pennington credited a team of 200 "super volunteers," or "builders," for coordinating the events and seeing that hosts had access to the campaign's organizing guide, merchandise and could get advice on details like the right kind of speakers to use.

Charles Carr, 25, one of the hosts of "Brooklyn Feels the Bern," said he had never organized an event like it before.

"He's someone you can count on to be true to his word," Carr said, explaining his motivation. "In politics, that's a unicorn, so I will vote for the unicorn, because it exists."

When asked whether or not he thought Sanders was electable, Carr was confident despite the challenge posed by Clinton.