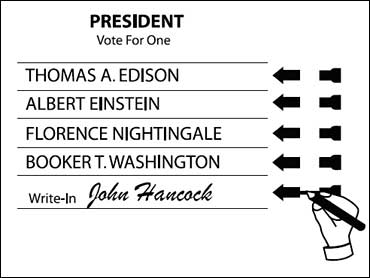 A ruling by Secretary of State Debra Bowen could delay Nov. 6 election results for weeks in San Francisco, where voters cast paper ballots.

Bowen has severely restricted the use of optical-scan systems by Election Systems & Software Inc., the Omaha, Neb.-based company that sells voting equipment to San Francisco.

Echoing the concerns of voting rights advocates, Bowen worries that ES&S ballots marked with anything other than a No. 2 pencil or special dark pens supplied in the voting booths might not be recorded properly. She's requiring all ES&S ballots to be sent to election headquarters for counting.

Collecting, transporting and tabulating ballots at the election headquarters downtown means the only results released on election night will be from absentee ballots, said San Francisco election chief John Arntz.

"We have to visually inspect each ballot to be sure the right implement was used before we can have it counted," Arntz said. "We won't be able to count more than 10,000 votes a day."

Arntz plans to release updates every day, but the it would be impossible to know definitively which candidate or ballot measure won -- and by how much a margin -- until all the votes were tallied.

San Franciscans will decide on a mayor, sheriff and ballot measures in November.

In 2001, Secretary of State Bill Jones ordered the city to spend more than $800,000 to recount ballots from the disputed November 2000 election, in which lids from ballot boxes were discovered floating in the bay three weeks later.

Former elections chief Tammy Heygood said the lids came from empty boxes and had blown away in a storm.