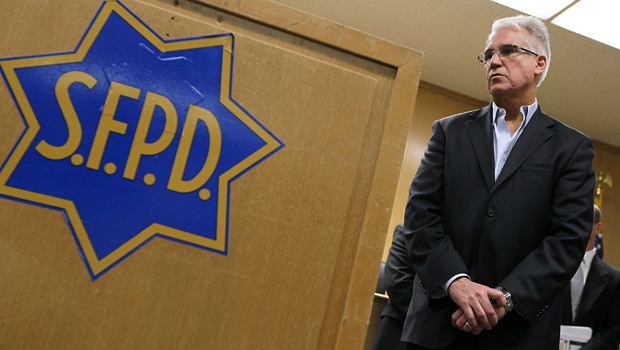 The trio will review criminal cases, arrests and convictions by the 14 officers from the last 10 years for possible evidence bias, according to Gascon.

Cases involving individuals who are incarcerated will be moved to the top of the list, he said.

Gascon said in cases where evidence is in question, his task force will -- and already is -- providing that information to defense attorneys.

Gascon estimated that perhaps 60 or 70 cases involving individuals in custody have already been identified, but he stressed that those numbers are likely to fluctuate as the investigation continues.

The text messages, released publicly in March through a motion by the U.S. attorney's office following the conviction of disgraced police Officer Ian Furminger on four felony charges related to the theft of money and property seized from drug suspects during searches in 2009, revealed inappropriate exchanges between Furminger and 14 other officers.

Gascon said Thursday that he decided to bring in the judges from outside of San Francisco because of concerns that he and the task force had regarding "deeper systemic issues" within the police department.

The judges will be equipped with a team of investigators that will review each case to check for possible racial bias, misconduct, wrongful convictions as well as statistical arrest patterns.

Gascon said the judges will be working pro bono. He said while he hopes their work will be completed by the end of the year, they will continue until all of the reviews have been completed.

The task force also aims to identify officers and department protocols that promulgate a dangerous or biased culture within the police force, Gascon said.

He said a report of the task force's findings will be released to the public upon completion of the investigation.

Gascon said that while the text messages were only made public in March, they had been turned over to the police department in 2012, which he said "creates many concerns for us because many people have been prosecuted since December of 2012 that involve some of the officers who were participating in these text messages."

The text messages included racist and derogatory language toward members of the public and police colleagues.

Gascon said the language in the text messages is hateful and that the recent misconduct exhibited by police officers is unacceptable. He explained that bigotry and police misconduct is a major issue across the country.

"As evidenced in events in Baltimore; Staten Island; Ferguson, Missouri; South Carolina and far too many other places, when a police officer engages in misconduct, there are significant implications for public safety and for the public trust, particularly in our minority communities," Gascon said.

"Issues of police misconduct and bias in policing are not limited to far-off places. Usually, San Francisco leads national conversations on equality and fairness, instead of racism, sexism, and homophobia. However, as recent revelations have shown, we are not immune to this epidemic," he said.

The Rev. Amos Brown, a NAACP board member, said he thinks the addition of the judges to the task force shows that the task force is seeking transparency.

Brown said the "bigoted, demeaning, and destructive texts" speak volumes about the culture in San Francisco and the Police Department.

He said black people are not treated fairly in San Francisco as exhibited by the high rate of black inmates in county jail and juvenile hall, despite the city's small black population.

He said the task force gives him hope that justice will be delivered to a city that "far too many times has been mute, silent and indifferent in the face of injustice."