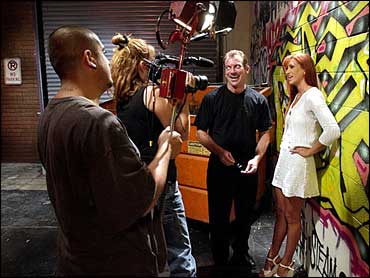 In the vast, suburban expanse of the San Fernando Valley, one of the largest industries thrives quietly inside unmarked warehouses, walled estates and hidden studios. In fact, some locals call it "San Pornando Valley."

The region is home to most of America's pornography industry - videos, Web sites, phone sex businesses, adult toys and even the old-fashioned dirty magazine.

While many parts of the nation's economy have suffered, the past five years have been good for the adult industry, as new video and computer technology opened the doors to hundreds of millions of potential customers around the world.

"The adult industry doesn't follow the same ups and downs that other businesses do," said Paul Fishbein, publisher of Adult Video News, the trade paper of the adult industry. "It still grows every year in terms of sales and rental volume."

While the valley is home to some of the biggest names in the movie business - Disney, DreamWorks, Warner Brothers and Universal Studios - the 354 square miles of tract homes, strip centers and freeways on the north side of the Hollywood Hills also hosts some less famous names in the industry - Vivid Entertainment, VCA, Wicked Pictures and dozens of other studios churning out X-rated DVDs and videos.

"Twenty years ago, you had people sneaking into those little theaters. That's all changed with technology," said Bill Asher, president of Vivid Entertainment. "We've gone from a market of hundreds of thousands to hundreds of millions."

The film, television and Web-based products produced by Vivid alone grossed $1 billion in retail sales last year, he said. A 1998 study by Forrester Research in Cambridge, Mass., estimated that the industry generates $10 billion a year.

But in a business where few companies are public and new providers continually appear, it's difficult to come up with a dollar figure for the industry, said Michael Goodman, an entertainment industry analyst at the Yankee Group in Boston. "But it is a very profitable business and pretty recession-proof."

Sales and rentals of adult videos produced by American companies was a $4 billion business last year, Fishbein said, based on a survey of thousands of video stores and overall sales figures from the Video Software Dealers Association.

That growth has produced dozens of large and small valley studios producing hundreds of new titles each year and created a star-making machinery much like the old Hollywood studios.

Actors like Jenna Jameson, the reigning star of adult films, have big-dollar contracts with filmmakers who promote them on Web sites, movie display boxes and public appearances.

A top "contract girl" can command thousands for dancing at an adult club, licensing products and starring on their own Web sites, like Jameson's "Club Jenna," said Jay Grdina, who runs Jameson's businesses.

But adult filmmakers and actors aren't the only ones making money. Mainstream cable companies, satellite providers and hotel chains that offer in-room adult movies are cashing in, too, but like to keep their involvement low-profile.

"We really can't characterize how popular adult programming is," said Robert Mercer, a spokesman for Direct TV, which offers adult channels and pay-per-view films. "We don't break out viewership for any of our channels."

Production of the valley's X-rated movies also is kept low-profile. Most are filmed in unmarked industrial buildings that border churches, schools and neighborhoods.

Two decades ago, the business was divided among Los Angeles, San Francisco and New York. It has migrated to the valley since then because of low rents and access to the mainstream movie business, Fishbein said.

A chance to see adult films at home helped sell millions of VCRs in the 1980s. Now the industry is experimenting with interactive DVDs, said John Virata, senior editor of Digital Media Net, a trade magazine for the digital industry.

"They are always the first movers in everything," he said.

In the valley, the business means thousands of jobs for actors, editors, directors, camera operators and set dressers, such as the people working on "The Alley," a new video being produced at a Vivid warehouse in Chatsworth. As the crew prepared to shoot, actors TJ Hart, Violet Blue and Brad Taylor passed around Altoids and discussed their upcoming scene.

In a small makeup trailer out back, another actress, who goes by the name of Dee, waited for her scene and talked about the business.

"For anyone looking for work, you have to be (in the valley)," she said.