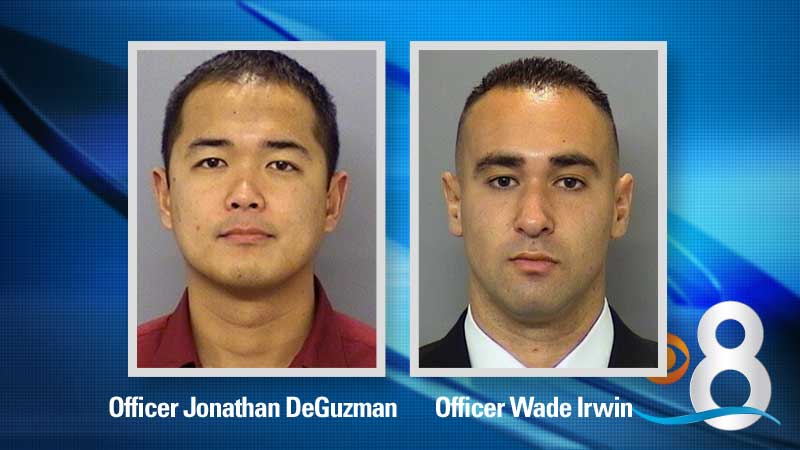 SAN DIEGO -- San Diego police have identified the two officers who were shot Thursday - one fatally - after a stop.

San Diego police chief Shelley Zimmerman said the two officers reported they were making the stop shortly before 11 p.m. and almost immediately radioed for emergency cover. Both were shot in the upper torso. Responding officers put one of the wounded officers into a patrol car and rushed off to a hospital but efforts to save him failed.

Zimmerman identified the slain officer as Jonathan DeGuzman, 43, a 16-year veteran of the force, and the surviving officer as Wade Irwin, 32, a 9-year veteran. DeGuzman was married and had two young children, Zimmerman said.

She described DeGuzman as a "loving, caring husband and father" who "talked about his family all the time." She said she worked with him in the department's mid-city division, before she was promoted to the police chief post in 2014.

The San Diego Padres held a moment of silence in DeGuzman's honor on Friday evening:

Earlier Friday, Zimmerman said after visiting Irwin at UC San Diego Medical Center that he has "a long haul" but is expected to fully recover after undergoing surgery. The officer's wife was with him. The couple has a 19-month-old child, reports CBS affiliate KFMB.

Zimmerman said she is "grateful" that Irwin is expected to survive.

Zimmerman said the shooting happened "extremely quickly." Both officers were wearing body cameras and there is video of the incident, she said.

The officers were part of the San Diego Police Department Gang Suppression team, but there was no word on any motive for the shooting or whether it was an ambush, police told CBS News.

Investigators are still looking into whether the shooting happened after a pedestrian stop or a traffic stop, Zimmerman said. Investigators don't have any information about a suspect vehicle.

Zimmerman said a suspect, later identified as 52-year-old Jesse Gomez, was in custody. Gomez was shot in the upper body and was being in critical condition at a hospital, but was expected to survive.

Friday morning, SWAT teams surrounded a San Diego home with a "possible second suspect" inside. A police officer used a bullhorn to urge a man to leave the house and police detonated several loud devices. The San Diego Union-Tribune reports a remotely controlled robot searched the home and no one was seen through it's camera, but it wasn't able to open a closet.

Around 1 p.m., reports KFMB, officers stormed the home and found no one inside. After failing to find a second suspect, they raced about two blocks to another house, positioning an armored truck and robots outside. He wasn't there either.

A man, identified as 41-year-old Marcus Antonio Cassani, was taken into custody in the street near the standoff on an unrelated outstanding warrant. Zimmerman said police are investigating whether he was involved in the early morning police shootings.

"We have seen this happen way too many times in just these last few weeks across our country," Zimmerman said. "It is tragic for everyone."

Zimmerman was emotional after visiting the home of the slain officer to notify the family.

"It is extremely difficult, but something you have to do," she told reporters outside Scripps Mercy Hospital. "There's nothing that prepares you to do that."