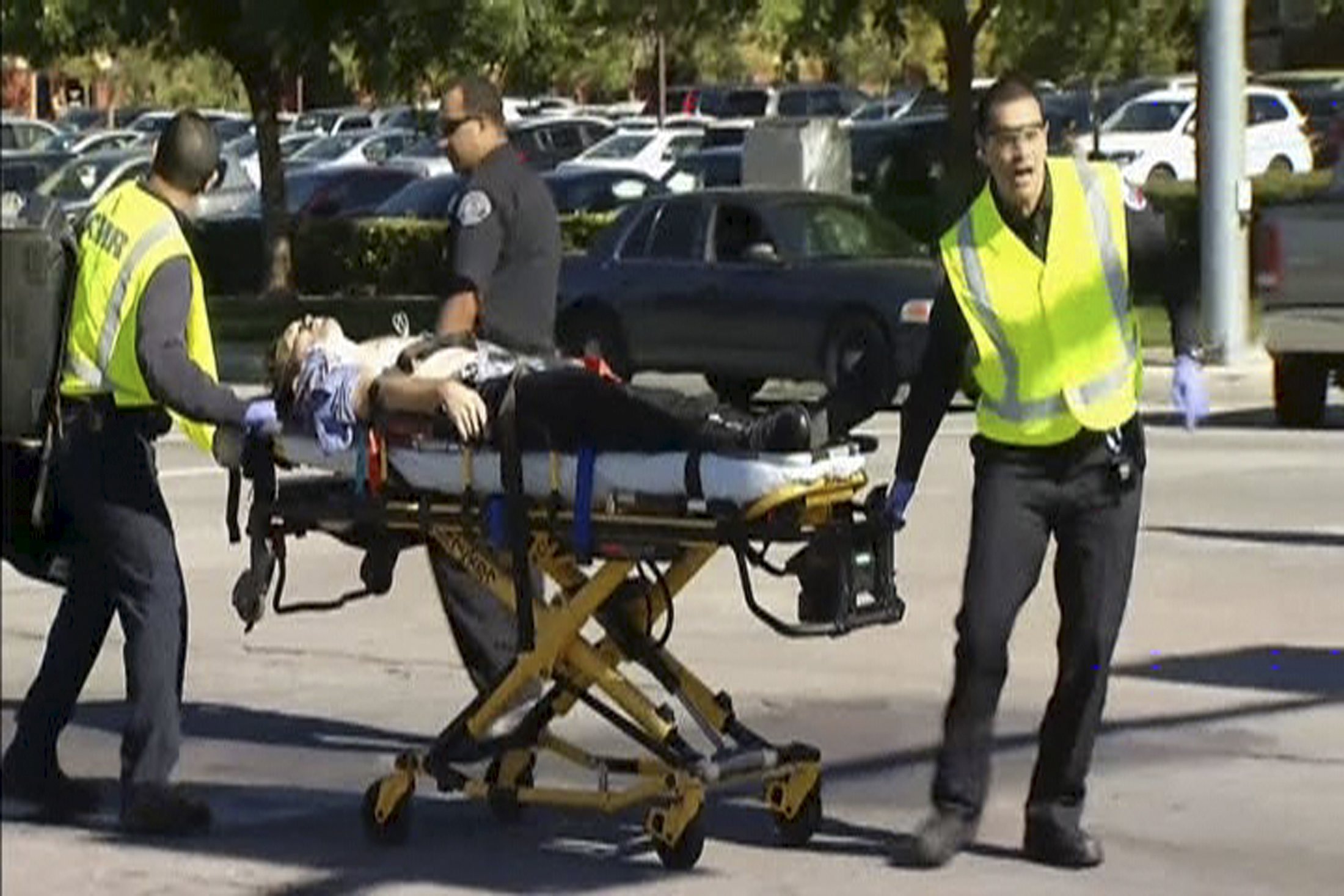 Police said there at least 14 people killed and 17 people wounded. The suspects were still at large a few hours after the shooting.

The state-run facility offers services for children and adults with intellectual and developmental disabilities including autism spectrum disorder, Down syndrome, cerebral palsy and other conditions.

Debbie Alvarado told CBS News she received a phone call from her daughter, Michelle, who was shot in the side. Michelle told her mother she and the people she was with were pretending to be dead, since the gunmen were still on the loose.

"48 Hours" Crimesider reporter Erin Donaghue spoke with Sandra Wood, interim executive director of the Inland Empire Lighthouse for the Blind, a school for visually impaired adults located about 200 feet from the Center.

Wood said she was on the second floor of her building around 11:15 Wednesday morning when she heard what sounded like automatic gunfire. She said she heard about 25 to 30 rounds, followed by more gunfire.

She said she heard about 25 to 30 rounds, followed by more gunfire.

"You could tell the person stopped and re-loaded and started again," Wood said.

Wood said she immediately moved away from the windows, called 911 and made an announcement to the school over an intercom telling students to stay where they were.

She said there were about 60 adults at the school and that people were worried and tense, but that everyone was safe. She said the school was on lockdown.

Family and friends were texting students and calling the main line, she said. She was seeing a large police presence and SWAT teams surrounding the building.

Hundreds of people with their hands raised were seen being evacuated from the social services building. Many were escorted to the San Bernardino Public Golf Course across the street.

CBS Los Angeles spoke to a man who said he received several texts from his daughter Holly, who was inside the building when the shooting began.

The first text read: "Dad shooting at my work, shot people in office. Waiting for cops to catch him. Pray for us."

The father said he texted back to his daughter, "Hide find a good spot hide now."

Holly texted back: "I am but we are locked in an office. Cops SWAT helicopter, everything here."

Another woman who identified herself as Monique told CBS Los Angeles she received a text from her sister Gina, who was inside the building, which read: "There's a shoot out at my work I'm scared."

Paul Lacroix, whose son Garrett works inside the Inland Regional Center, said his son texted him and told him alarms started going off and they got word there was shooting. He said his son was sheltered with a group of people before they managed to get out.

Lacroix said he told his son to hunker down, turn his cell phone off and to not make any noise.

"It's just not good," Lacroix said of the situation. "It's something that we're starting to learn to have to live with. We just have to learn to take better stands for what we're doing."

On speaker phone, Garrett Lacroix said that people inside the building were shook up and were being given water bottles.

"The fire alarm went off, but then someone started shouting in the halls there was a possible bomb so we were all told to get back into our office. Eventually we saw officers with vests and automatic weapons so we retreated to our room," Garrett Lacroix said.

Soon, a message over the intercom instructed them to exit with their hands in the air and nothing in their hands.

Mark Scroggins was waiting outside the building for word of his daughter, who works inside.

"This is crazy. There's too many shootings. Too many bad things going on out here. You hear about it, but this is insane. This is crazy," he said.

Terry Petit says he got a text from his daughter saying she was hiding after gunfire erupted at the social services facility in Southern California where she works.

Petit choked back tears Wednesday as he read the texts for reporters outside Inland Regional Center.

He says she wrote: "People shot. In the office waiting for cops. Pray for us. I am locked in an office."

Ambulances and law enforcement vehicles were racing through the area with sirens blaring.