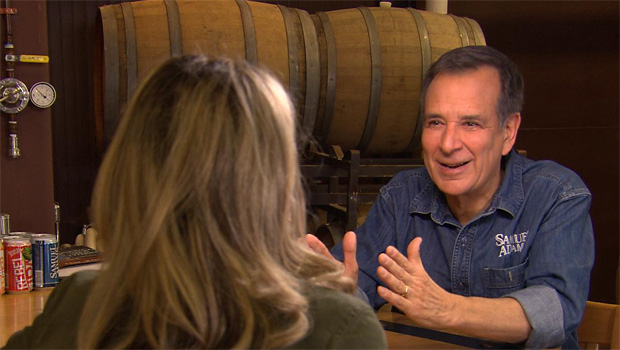 From hero of the Revolution to highly successful brand of beer ... it's no wonder so many folks are saying "Cheers" to Samuel Adams. Serena Altschul paid a visit to Sam's hometown:

At the Sam Adams brewery in Boston, craft beer lovers unlock the aromas of hops ... learn what a "mash-in" is ... and, of course, sample a variety of brews.

"This was actually brewed with kosher salt, which is something that I didn't know before," said Anna Pinella. "But it definitely adds a different, like, layer of flavor to the beer." She believes that "super-hoppy styles are really in with my kind of generation."

"My favorite ones would be porters or stouts -- really darker, sweeter ones," said Chris Quartararo.

Today, there are more than 4,000 craft brewers in the United States. When Jim Koch started his company in 1984, the American beer landscape was very different.

"American beer was the laughing stock of the rest of the world," Koch said, "because everybody thought it was just watery and fizzy."

Determined to change that, Koch quit his corporate job to brew beer. He thought his father, a fifth-generation brewer, would be pleased.

"I thought we were gonna have a father-son moment -- 'That's so great, you're continuing this long tradition,'" Koch said. "He didn't do any of that. He looked at me, said, 'Jim, you've done some stupid things in your life. This is about the stupidest thing!'"

Today, Sam Adams, named for one of the fieriest of American revolutionaries, has started a revolution of its own, and Jim Koch is a billionaire -- a made-in-America success story he writes about in his new book, "Quench Your Own Thirst: Business Lessons Learned Over a Beer or Two" (Flatiron).

He's been called the "Steve Jobs of beer."

"I thought that was a very kind comparison," Koch said. "He put a ding in the universe; I'm just trying to give people a better glass of beer!"

Starting with his great-great-grandfather's recipe!

"Luckily, the hops that it called for, the specific varieties of hops, were still grown in Bavaria, just north of Munich," Koch said.

Thirty-two years in, Koch is as passionate about beer as ever, though now he's the guy to beat in an industry that has exploded in recent years.

Altschul asked, "Is there a kind of bittersweet or ironic element to the fact that now I can't even find Sam Adams in some of these fancy beer bars, where you have all of the crazy craft beers? Is that frustrating?"

"Not really," he replied. "When I think about the success that Sam Adams helped create with the craft beer revolution, you know, it's been good for me."

"What was fantastic about it at the time was, we just had a dream," said Lees.

This year, Flounder Brewing Company is expanding, and as the winner of the Sam Adams Brewing and Business Experienceship Award, it will be helped by Koch's company.

"Sam Adams is literally opening the door of their company to us," said Lees. "We get to go up there and meet with any departments we want to meet with. We're gonna be starting payroll, so I want to meet with human resources people. We're gonna be working in much, much larger scale of ingredients, so I'm gonna get to meet with supply chain management and learn what they've done, and so hugely successful. So it's an incredible opportunity!"

And when it comes to craft beer, he says there's plenty of room for everyone.