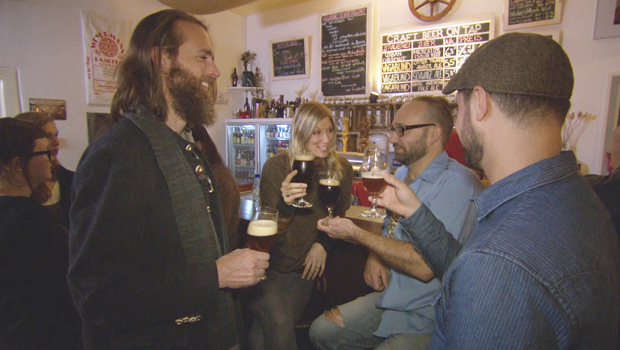 Hops and malt and yeast and water ... put them all together and you get BEER! Though the basic recipe is ancient, variations and improvements are always on tap, even in a land where most people like their beer as it is. Here's Elizabeth Palmer:

In Germany foaming golden beer is more than a drink; it's the lifeblood of tourism, an excuse to dress up.

And for Germans, it's a pillar of national identity -- at least for the older generation.

But the young (who tend more to dance clubs than beer halls) have been losing interest in the traditional brew, and turning to hipper mixed drinks.

Enter Greg Koch, who thinks he's got what it takes to tempt them back: U.S.-style craft beer. Cool, bold, experimental. The Berliner Kurier newspaper cast Koch as an American beer "savior" come to shake up a boring German beer scene.

Craft beer took off in the U.S. about 20 years ago, and Koch was one of its pioneers. A self-confessed beer geek, in the '90s he co-founded the Stone Brewing Company in California with his partner, Steve Wagner.

It's now the 10th largest craft brewery in the U.S., with annual sales of over $130 million.

If Americans loved these beers, Koch thought, so would Germans. And to prove it, he spent $25 million last year on an old Berlin gasworks, which he's making into a brewery.

Palmer asked, "Is there anything like this in Berlin at the moment?"

"Nothing, absolutely nothing at all," he replied.

Koch's grand vision for this space also includes gardens and an 800-seat restaurant, based on Stone's runaway success operation in San Diego.

To get there, Koch is going up against the traditional German brewing industry, which in 2013 made almost 2.5 billion gallons of beer, sold widely and cheaply. So he knows there will be skeptics.

"For the typical industrial beer drinker, they're probably going to be quite dismissive, I would guess," said Koch. "You know, 'German beer is the best. Anything else from anywhere else is not worth my time. And by the way, you're American?'"

But Koch is no dummy. He's seen the numbers. Trendy bars like Vagabund in Berlin specialize in craft beer, and they're drawing young drinkers looking for premium brews ... while the government's own figures show sales of industrial beers have trended downward for a decade.

Of traditional German beers, one aficionado, Beatrice, told Palmer, "For me they all taste the same. But the craft beer, you have so many different flavors and colors and aromas that you can't get with the majority of German beers."

Aromas that craft brewers get by adding all kinds of exotic ingredients: cinnamon, nutmeg, hacia pepper and chocolate.

That's sacrilege to some big industrial brewers, and they're muttering about a legal challenge, arguing ancient purity laws say anything labeled "beer" in Germany has to be ONLY hops, malt, yeast and water.

"In Germany there will be some resistance at first," Lawton told Palmer, "and there will need to be a national debate on what beer is, and the identity to beer and Germany's relationship to bee, and whether these are foreign styles that are invading German beer culture, or if these are another way of looking at the product."

Germany has seen a 30 percent increase in craft brewering in the last decade. But no matter how you cut it, Greg Koch is taking a multi-million-dollar gamble. This is about much more than business.

"It's a lot of money to indulge a passion with," said Palmer.

"Fortunately, I am blessed with that unrealistically entrepreneurial gene," said Koch. "I see a vision for something and I believe that other people will like this vision, too."