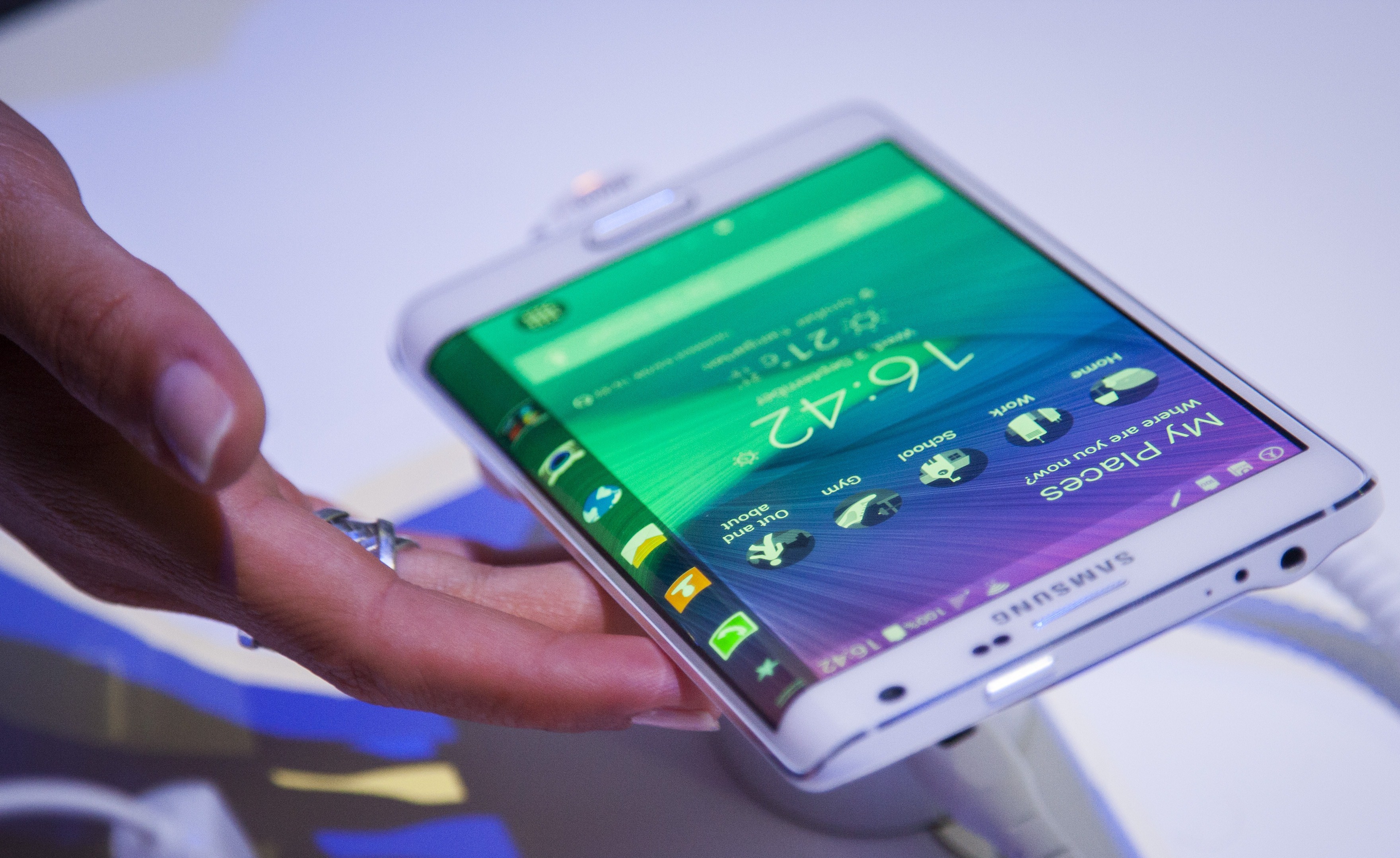 Samsung is unveiling some of its biggest new products of the year today at Europe's largest tech show, IFA in Berlin.

Just days before Apple is expected to introduce its next generation iPhone, the centerpiece of Samsung's event is its own flagship phones, the large-screen Galaxy Note 4 and a new Galaxy Note Edge. Samsung also showed off new advances in wearable technology and a virtual-reality headset called Gear VR.

The Galaxy Note Edge uses Samsung's flexible-display technology, which came out with much fanfare last year but has seen little use beyond a phone and a fitness device with displays that were slightly curved.

While the main screen remains flat like previous phones, the right edge extends and curves until it reaches the back. That creates a side display so information such as weather and time can be seen from the side when the phone is laid on a table or nightstand.

With the side display, the phone's camera functions more like a stand-alone, point-and-shoot camera, as the shutter button and other functions appear on top when the phone is held horizontally.

The side display also provides one-tap access to various apps normally found on the home screen. It will also have a panel of tools, like the flashlight and stopwatch, akin to what Apple offers in the iPhone's Control Center with a swipe up from the bottom. Samsung will look to app developers to find new ways to use the feature.

"We take risks," Justin Denison, vice president of product and strategy for Samsung Telecommunications America, said in an interview with CNET. "We think the market will love it."

The new Galaxy Note 4 phone features a large 5.7-inch HD display, but lacks the side screen of the Edge.

Samsung did not announce prices. Last year's Galaxy Note 3 went for about $700 without a contract, or $300 with one. Prices are likely to be similar for Note 4, which will be offered by all four national carriers in the U.S. The Edge will likely cost more.

Both new Samsung phones are due for release in October - in time for holiday shopping - and aim to compete with Apple's new iPhones, which are due to be unveiled at an event Sept. 9 in Cupertino, California.

Samsung also showed off a $200 Gear VR virtual reality headset as a companion to the Note 4. It won't work with the Edge or other phones. The Note 4 attaches to the headset, which has sensors to gauge the head's position and tells the phone which part of a 360-degree image to display.

The Gear VR headset can be used to give people an immersive experience with concerts, aerial footage and games, though more content will have to be created for it.

The VR was developed with Oculus, which Facebook bought this year.

Other major tech companies including Sony, Nokia, LG, HTC and others are also planning to introduce new products at IFA over the next two days.

See more coverage of the Samsung Galaxy phones and other highlights from the IFA tech show on our partner site CNET.