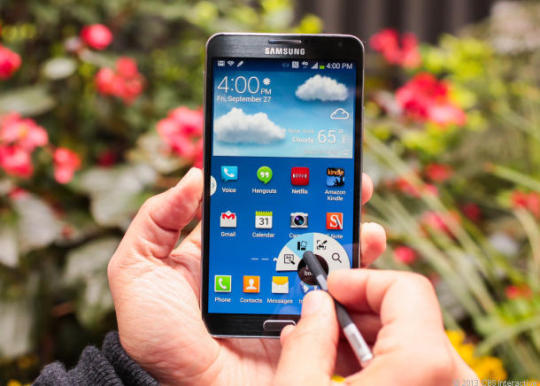 The stakes have never been higher for Samsung's oversize Galaxy Note 4.

While Apple's iPhone and Samsung's Galaxy S smartphone franchises have duked it out for flagship supremacy, Samsung's other marquee smartphone line, the Galaxy Note, has enjoyed the lack of opposition in serving power users willing to pay up for a much larger display -- a market it essentially created. But the Galaxy Note 4, which will be unveiled at Samsung's "Unpacked" event Wednesday, may no longer be the only legitimate jumbo phone in the market -- Apple is expected to unveil two larger iPhones next week.

The Unpacked event comes at a critical time for Samsung. While the Galaxy Note line has always played second fiddle to the Galaxy S line, the Note 4 arrives as more consumers are willing to tolerate the bulkiness of a larger display for an improved video, gaming, and Internet-browsing experience. Interest in the product is high. And the company badly needs a hit after the disappointing sales of the Galaxy S5 and mounting competition from Chinese vendors for budget smartphones and from Apple on the high end. Apple potentially offering two larger iPhones doesn't help.

"Samsung's in trouble right now," Gartner analyst Van Baker said. "I don't know what they've got in their arsenal that can [change] this."

Enter the Galaxy Note 4. Most variants of the device will come with the speedy Qualcomm Snapdragon 805 processor, according to people familiar with the matter. It's believed to feature a 5.7-inch ultra high-definition display 4K, a metal frame much like the Galaxy Alpha, and a 16-megapixel rear-facing camera.

Samsung also will unveil its new virtual reality headset, developed with Facebook's Oculus, said people familiar with the new device. And it will show off its new Gear S smartwatch that has its own 3G modem and runs Samsung's open-source Tizen operating system. Samsung announced the device late Wednesday, ahead of its Unpacked event. Of course, the company also could show off other items, and its plans could change.

Samsung needs a jolt. The company -- the world's biggest smartphone vendor by a wide margin -- is being pressured in emerging markets by low-cost handset vendors such as Xiaomi and Huawei. It's also facing stiff competition from Apple in the market for pricey, high-end smartphones, despite the fact Apple's current phone, the iPhone 5S, is nearly a year old. Of the five biggest smartphone vendors in the world, Samsung was the only one that saw shipments fall year-over-year in the second quarter, according to IDC.

Samsung admitted during its second-quarter earnings report in July that excess inventory in China and Europe caused device sales to slide and increased the amount it spent on marketing to counteract the issue. It also noted that its earnings were hurt by increased price competition, and it was hard to sell its older 3G phones in China as the country shifts to 4G LTE technology. Those factors contributed to a 30 percent drop in profits in Samsung's mobile division in the June quarter and caused the company to warn that the second half of 2014 would remain a challenge.

That challenge will come in the form of more potent competition. Apple is expected to potentially release two smartphones: a 4.7-inch smartphone and a 5.5-inch phablet, and the Chinese vendors will continue to release cheap devices with top-of-the-line specs at a rapid pace. Fitch Ratings, a major credit rating agency in the US, predicted in mid-August that Samsung's global smartphone market share will fall to 25 percent in 2015 from 31 percent this year.

Simply releasing a Galaxy Note 4 with metal accents or emphasizing just how great the phablet's pen works won't be enough. And it's highly unlikely a standalone smartwatch or virtual reality device could generate enough sales to offset a slowing smartphone market. Instead, Samsung needs to take a hard look at its operations and figure out what it's going to do differently.

While Samsung often gets knocked as a "fast follower" when it comes to tech trends, it's indisputable that the company blazed a new trail with the introduction of the original 5.3-inch Galaxy Note in 2011. Though the device was mocked at first for its large, almost comical display, the larger display size gradually found acceptance with consumers. There was a begrudging acceptance of the Note 2 in the market and eager anticipation for the Note 3. It also set off a stream of similar big-screen devices from rival handset vendors such as HTC and LG.

Phablets, typically defined as having screens between 5 and 6.99 inches, still make up a small percentage of the overall smartphone industry's sales. Only 15 percent of smartphones sold worldwide last year were phablets, according to Strategy Analytics. This year, the phablet share should rise to 22 percent, thanks to Apple's newest devices, Strategy Analytics analyst Neil Mawston said.

"Phablets are booming already in Asia, and we expect that trend to spread to North America and Europe when Apple launches its bigger-screen iPhones," Mawston said.

Despite pioneering the market, Samsung risks losing its position to Apple. Analysts say there's a lot of pent-up demand for larger iPhones, and the iPhone 6 could be one of the largest product launches in Apple's 38-year history. Apple reportedly has asked manufacturing partners to produce about 70 million to 80 million units of its larger screen iPhones by December 30, which is about 30 percent to 40 percent more iPhones than it ordered for its initial run of last year's iPhone 5S and 5C.

For Samsung, offering bigger displays has always been a key feature that sets its devices apart from those by Apple. The removal of the size advantage means the Galaxy Note 4 will have to impress on its other merits or risk falling behind. Given Samsung's precarious position, that's something it can ill afford.