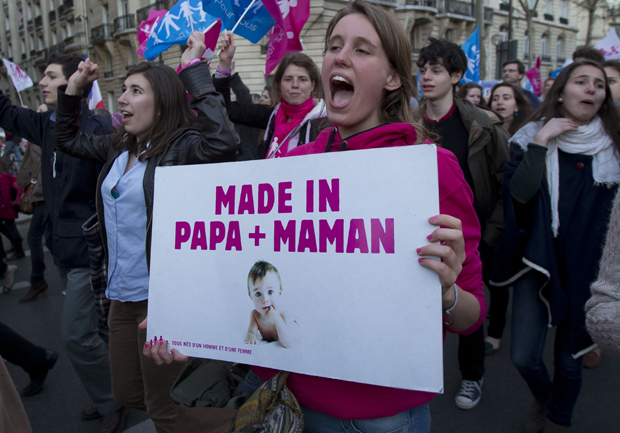 PARIS Tens of thousands of demonstrators took to sunny Paris boulevards on Sunday to protest the expected passage this week of a bill legalizing gay marriage. One protestor called the bill "a threat to the social fabric."

Legalizing gay marriage was one of President Francois Hollande's campaign promises. Polls have shown a narrow majority of French favor allowing such unions, though the support weakens when questions about adoption and conception of children come into play.

As the bill has made its way through the French legislative process, opposition has mounted, especially from conservative groups from more rural parts of the country. While the protests against the gay marriage bill have been largely peaceful, violence has occasionally erupted on the sidelines.

Sunday's march wound across the Left Bank and culminated in a gathering on the vast Invalides esplanade. A heavy police presence was deployed along the route, while a smaller counter-demonstration drew thousands across the Seine river to the large Bastille square.

"I am here as a Catholic, in the name of Jesus," said a 65-year-old retired woman who would only identify herself as Maria.

A 58-year-old lawyer, Patrick Poydenot, stood outside the historic Select cafe with his young son. He'd been to past demonstrations and decided he would show up this time despite the bill's likely approval.

"We believe that this bill is a threat to the social fabric," Poydenot said. If the bill "passes, a fundamental rule of society will disappear."

Both houses of the French parliament have already approved the bill in a first reading. The second and final reading is expected Tuesday.