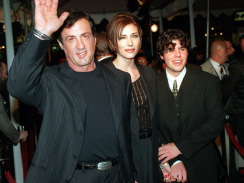 Authorities were investigating Sage Stallone's death, but details were not immediately available.

"Sylvester Stallone is devastated and grief-stricken over the sudden loss of his son," publicist Michelle Bega said in a statement. "His compassion and thoughts are with Sage's mother, Sasha."

Los Angeles police said they were dispatched to investigate a death at a home on Mulholland Terrace around 2:15 p.m. but could not confirm the person's identity or offer details.

Coroner's officials also said they were in the initial investigative stages.

"Sage was a very talented and wonderful young man, his loss will be felt forever," Bega said.

George Braunstein, an attorney who has represented Sage Stallone for 15 years, said a housekeeper found his body Friday afternoon. Friends and acquaintances had become concerned because they hadn't heard from Stallone in the past day, Braunstein said.

Sage Moonblood Stallone was the oldest of Sylvester Stallone's children and co-starred with his father in two films. He was the first of two sons Stallone had with first wife Sasha Czack.

Sage Stallone made his acting debut in 1990's Rocky V and also appeared with his father in 1996's Daylight.

Also in 1996, Sage Stallone and veteran film editor Bob Murawski co-founded Grindhouse Releasing, a company dedicated to preserving and promoting the B-movies and exploitation films of the 1970s and 80s.

"He was very respectful of all the actors in all the movies," Braunstein said. "You couldn't mention a movie that he didn't know everything about."

Braunstein said Stallone was planning on getting married for the first time, and had frequent requests to work on films.

"He was a full of life filmmaker with his whole future ahead of him," Braunstein said. "He was just very up and enthusiastic and positive.

"I think it was probably some sort of accident," he said of the death.

Braunstein said Sage Stallone greatly admired his father but was working hard to make his own name in the film industry.

"He was very proud of his father and proud to be his father's son," Braustein said.