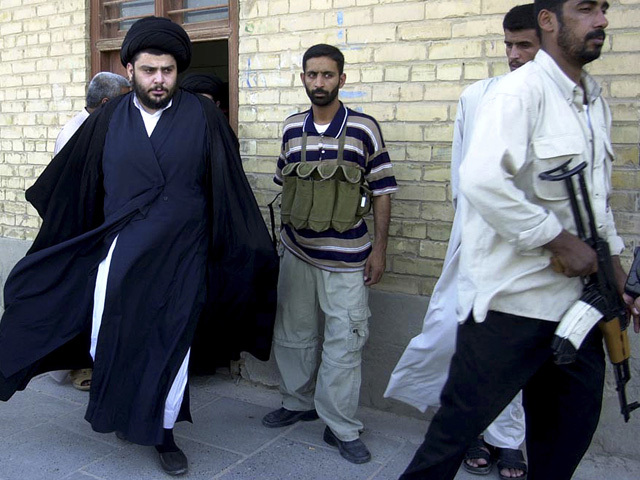 BAGHDAD - The political party loyal to radical Shiite cleric Muqtada al-Sadr called for the dissolution of Iraq's parliament and new elections in another move that could escalate the country's growing sectarian crisis.

The anti-American Sadrist bloc is a partner in the Shiite-dominated government of Prime Minister Nouri al-Maliki. Bahaa al-Aaraji, the head of the Sadrists' bloc in parliament, said Monday that the elections are needed because of instability in the country and problems that threaten Iraq's sovereignty.

"The political partners cannot find solutions for the problems that threaten to divide Iraq," he said.

Iraq plunged into a new sectarian crisis last week, just days after the last American troops withdrew at the end of a nearly nine-year war.

The new political crisis has been accompanied by a new wave of attacks on the Iraqi capital by suspected Sunni insurgents linked to al Qaeda. A suicide bomber set off a car bomb Monday at a checkpoint leading to the Interior Ministry, killing seven people and injuring 32, officials said. Police and hospital officials said the bomber struck during morning rush hour, hitting one of many security barriers set up around the ministry's building.

Al-Maliki is in a political showdown with the country's top Sunni political figure, Vice President Tariq al-Hashemi, after the government issued an arrest warrant for al-Hashemi on allegations his bodyguards ran hit squads targeting government officials.

The prime minister threatened to form a government without al-Hashemi's Sunni-backed political party, Iraqiya, which is boycotting parliament and mulling whether to pull out of the ruling coalition.

Iraq was dominated by the minority Sunnis under Saddam Hussein until the U.S.-led war that began in 2003 ousted him. Majority Shiites have dominated the government ever since, though Americans pushed hard for the inclusion of Sunnis with a meaningful role in the current governing coalition.

Bitter sectarian rivalries played out in 2006-2007 in violence that took Iraq to the brink of civil war and the latest tensions have raised fears of a resurgence of Shiite-Sunni violence.

The political crisis taps into resentments that are still raw despite years of efforts to overcome them. The Sunnis fear the Shiite majority is squeezing them out of their already limited political role. Shiites suspect Sunnis of links to militants and of plotting to topple the Shiite leadership.

The Sadrists have played an important role in maintaining Shiite domination over government — their support last year catapulted al-Maliki back to the prime minister's office for a second term.

For the proposal to dissolve parliament to gain traction, it would take the consent of at least 1/3 of parliament, the president and the prime minister or a simple majority of lawmakers. Al-Maliki, who only secured his position after nearly nine months of political wrangling after the last elections, would likely be loathe to go through the process again and risk an unfavorable outcome.

Al-Aaraji said the proposal first needs approval of the larger coalition between the Sadrists and al-Maliki's alliance, the two most powerful Shiite parties.

A Shiite lawmaker loyal to al-Maliki, Kamal al-Saiedi, said the proposal should be studied.

"Forming the current government was not an easy issue, therefore going back in the direction of new elections would be more difficult," he said.

A Sunni lawmaker with Iraqiya, the Sunni-backed bloc of the wanted vice president, said new elections would not bring security and stability. He pointed to the prolonged negotiations that were needed to agree on the government in place now, and said a new election would only bring the same people to office.

"We need to sit around the same negotiating table and that is the only path to salvation from this current crisis," said Kamil al-Dulaimi.

Al-Maliki's adviser for National Reconciliation Amer al-Khuzaie, said leaders of Asaib Ahl al-Haq, one of the top Shiite militant groups, had decided to lay down their weapons and join the political system.

Asaib Ahl al-Haq, or Band of the People of Righteousness, was a splinter group from the Mahdi Army, also headed by al-Sadr. They, along with the Mahdi Army, were two of three Shiite militant groups active in Iraq that were dedicated to fighting the U.S. military presence.

Officials from the group were not available to confirm the decision.

U.S. officials have warned that these Shiite militant groups could turn against the Iraqi government after the American military has gone. A key test to whether Asaib Ahl al-Haq, an Iranian-funded group, is committed to becoming a peaceful part of the political process is whether they actually turn in their weapons, especially the more powerful and sophisticated weapons they're believed to get from Iran.