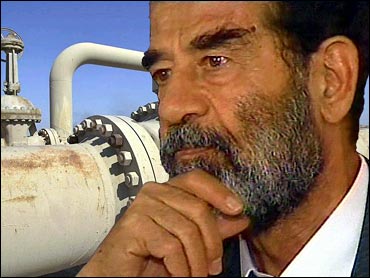 Congressional investigators say Saddam Hussein diverted money from the U.N. oil-for-food program to pay millions of dollars to families of Palestinian suicide bombers who carried out attacks on Israel.

Investigators who have been following a money trail say the former Iraqi president tapped secret bank accounts in Jordan - where he collected bribes from foreign companies and individuals doing illicit business under the humanitarian program - to reward the families up to $25,000 each.

Documents prepared for a Wednesday hearing by the House International Relations Committee outline the new findings about how Saddam funneled money to the Palestinian families.

Investigators examining the oil-for-food program felt it was "important for us to determine whether the profits from his corruption were put toward terrorist purposes," committee chairman Henry Hyde, R-Ill., said of Saddam's well-known financial support of suicide bombers.

Wednesday's hearing, however, will focus on a French bank that handled most of the money for the program. An audit by a U.S. regulatory agency of a small sample of transactions out of the $60 billion U.N. escrow account managed by BNP-Paribas has raised serious questions concerning the bank's compliance with U.S. money laundering laws, investigators said.

"There are indications that the bank may have been noncompliant in administering the oil-for-food program," Hyde said in his statement to AP. "If, true these possible banking lapses may have facilitated Saddam Hussein's manipulation and corruption of the program."

While acknowledging that U.S. regulators have raised routine issues with BNP on compliance with banking laws, a lawyer for BNP said Hyde's statement was unfair.

"No departure from any standard caused or contributed in any way to the abuse at the oil-for-food program," the bank's lead counsel Robert S. Bennett said. "There are simply no connections."

The humanitarian program that let Iraq trade oil for goods was set up in 1996 to help Iraqis get food, medicine and other items that had been scarce under strict U.N. economic sanctions imposed after the Gulf War. But investigators say Saddam made more than $21.3 billion in illegal revenue under the program as well as by evading the sanctions for more than a decade.

Iraq had thousands of secret bank accounts throughout the world, including over 1,500 in Jordan. Money from kickbacks on oil-for-food deals, illegal oil payments from the Jordanian government and other illicit funds were paid into accounts held by a Jordanian branch of the Iraqi government-owned Rafidain Bank, investigators said.

According to employees of the Iraqi Central Bank and the Rafidain Bank, the former Iraqi ambassador to Jordan, Sabah Yassen, withdrew money from the accounts to make payments ranging from $15,000 to $25,000 to the families of Palestinian suicide bombers, Hyde said.

Palestinians have said Saddam paid more than $35 million to families of Palestinians killed or wounded in the conflict with Israel that began in September 2000. Since then, Palestinians have carried out 117 suicide bombings, killing 494 Israelis and others.

Five congressional panels, including Hyde's, have been pressing a U.N.-appointed independent inquiry to hand over internal U.N. documents for their own oil-for-food probes.

In the current highly charged atmosphere, Volcker said, the panel wants to avoid release of "potentially misleading and incomplete information that could impair ongoing investigation, distort public perceptions, and violate simple concerns of due process."

At Wednesday's hearing, Hyde's panel will question two BNP executives and plans to transfer documents for a possible investigation to the House Committee on Financial Services.

BNP held the sole escrow account through which all of the more than $60 billion of Iraqi oil revenues generated through the program flowed while it was in place from 1996 to 2003.

BNP also wrote letters of credit for deals for the import of humanitarian goods which were approved by the United Nations and paid for out of the escrow account.

Investigators said evidence from documents subpoenaed from BNP in July and received from U.S. regulatory agencies suggests that the French bank - which has New York offices - failed to comply with anti-money laundering laws passed under the U.S. Patriot Act in 2001.

Investigators also said they had evidence BNP illegally allowed letters of credit, or payments for import deals, to be transferred to third parties.

"The bank did not have any responsibilities to do due diligence regarding third parties," Bennett said. "Our only client and customer here was the United Nations."

The U.N. Security Council approved all deals under the oil-for-food program, Bennett said.

The House International Relations Committee's subpoenas did not include demands for documents related to the bank's letters of credit, Bennett said.