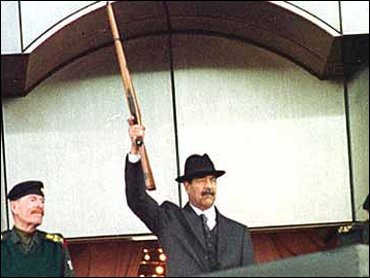 Iran and Libya - not Saddam Hussein's regime in Iraq - were Britain's main security concerns before the invasion of Iraq, Foreign Office officials testified Wednesday at an inquiry probing Britain's role in the war.

William Ehrman, the Foreign Office's director of international security from 2000 to 2002, said "in terms of nuclear and missiles, I think Iran, North Korea and Libya were probably of greater concern than Iraq."

The inquiry, billed as the most sweeping look yet at the conflict, was in its second day of hearing public evidence. It is examining Britain's involvement in Iraq, beginning with the run-up to the 2003 invasion and concluding in July 2009.

The Iraq war, which left 179 British soldiers dead, was deeply unpopular in Britain. Former Prime Minister Tony Blair is to be called to testify before the inquiry, which is headed by retired civil servant John Chilcot.

The panel isn't expected to report before the end of next year, and won't establish criminal or civil liability.

Tim Dowse, the Foreign Office's head of counter-proliferation between 2001 to 2003, agreed with Ehrman, telling the panel that Iraq "wasn't top of the list."

"In terms of my concerns on coming into the job in 2001, I would say we put Libya and Iran ahead of Iraq," he said. 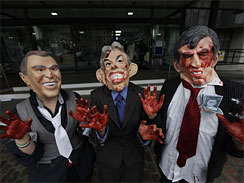 (AP Photo/Lefteris Pitarakis)
"There had been nothing that looked like a relationship between the Iraqis and al Qaeda," he said. "In fact, after 9/11, we concluded that Iraq actually stepped further back. They did not want to be associated with al Qaeda. They weren't natural allies."

The United States and Britain, its main ally, launched the war to deny Saddam weapons of mass destruction, but it later turned out he did not have any.