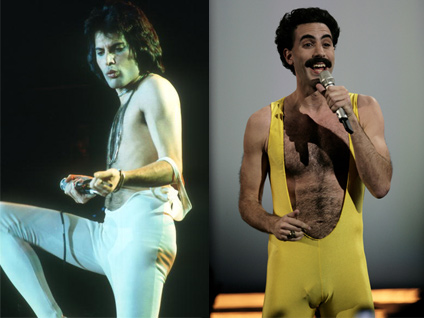 "Borat" star Sacha Baron Cohen has been signed up to star in a movie about flamboyant rock star Freddie Mercury.

Peter Morgan, who wrote "The Queen," is working on a screenplay about the frontman of the band Queen, who died of AIDS-related causes in 1991.

The as-yet-untitled film focuses on the band's formative years, according to Deadline.com, leading up to Queen's barnstorming appearance at the 1985 Live Aid concert in London.

The website reports that a rights package has been set that includes the band's tunes, including "Bohemian Rhapsody," "We Will Rock You," "We Are the Champions," "Another One Bites the Dust" and "You're My Best Friend."

The announcement was made by GK Films, which is producing with Robert De Niro's Tribeca Productions and Queen Films.

Production is due to begin next year, and a director has yet to be chosen.

Queen was founded in 1971 by Mercury, guitarist Brian May, bassist John Deacon and drummer Roger Taylor. May told the BBC that the band supports the project, and May and Taylor will oversee the music for the film.

There was no word on whether Baron Cohen will try to imitate Mercury's grandiose singing style, but the comedian has appeared in several musicals, including Tim Burton's film version of "Sweeney Todd."

He said the choice of Baron Cohen, creator of wannabe rapper Ali G, Kazakh journalist Borat and Austrian fashionista Bruno, "will probably be a shock to a lot of people, but he's been talking with us for a long time."

"He's been in on this project since we started talking about it seriously with Peter Morgan a couple of years ago." May said.