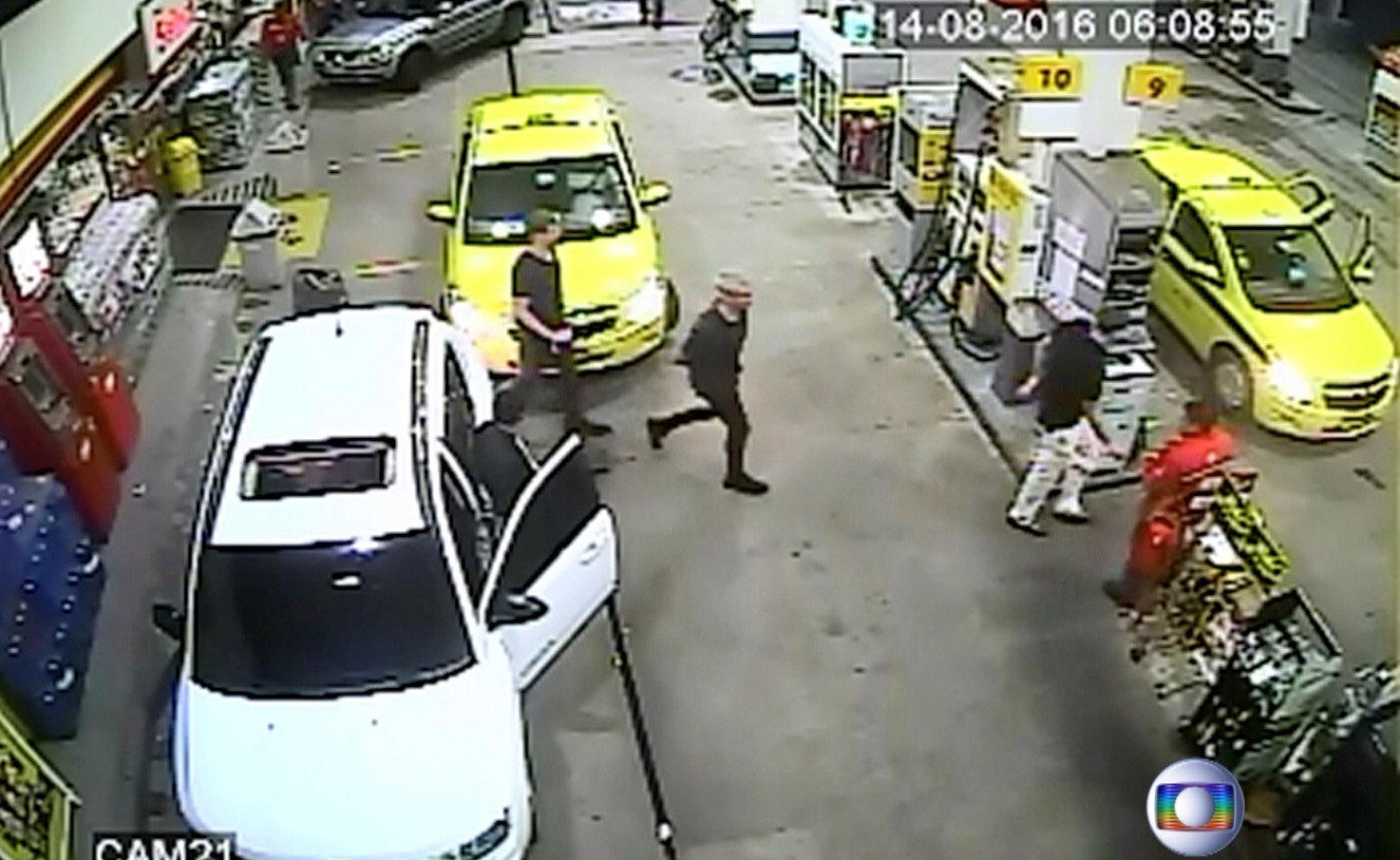 RIO DE JANEIRO -- Brazilian police said Thursday that swimmer Ryan Lochte and U.S. teammates were not robbed after a night of partying, and that the intoxicated athletes instead vandalized a gas station bathroom and were questioned by guards before they paid for the damage and left.

The robbery that was or wasn’t has become the biggest spectacle outside of the Olympic venues in Rio, and given American swimming a black eye in Brazil after an otherwise remarkable run at the Summer Games.

“No robbery was committed against these athletes. They were not victims of the crimes they claimed,” Civil Police Chief Fernando Veloso said during an afternoon news conference.

Lochte had initially said that he and teammates Jack Conger, Gunnar Bentz and Jimmy Feigen were held at gunpoint and robbed after a night of partying on the final night of Olympic swimming. Police said earlier this week that they couldn’t find evidence to substantiate the claim, and a judge ordered the swimmers’ passports held as the investigation continued. Lochte had already returned to the U.S.

While some details in the official account of the story changed on Thursday -- police first said no guns were involved, then backtracked and said two guards pointed weapons in their direction -- security video confirmed that the athletes vandalized parts of the gas station, leading to an encounter with station employees.

The closed-circuit video shows the four in an alley walking toward a bathroom. At one point one of them pulls a sign off of a wall and drops it on the ground behind them. A gas station worker arrives, and other workers go to inspect the damage.

Another camera then shows the swimmers in a cab, when security guards arrive. All four swimmers exit the cab and talk with the guards, who persuade them to walk to another section of the gas station. The cab they arrived in then leaves.

Seconds later, Lochte falls to the ground and is helped up. Then two of the swimmers put their hands up and all four sit down on a curb as they speak to multiple people standing in front of them. After several minutes of talking, they stand up and appear to exchange something - perhaps cash - with one of the men.

Veloso said the swimmers broke a door, a soap dispenser and a mirror.

A police official speaking on condition of anonymity because the investigation was ongoing told The Associated Press that two guards pointed guns at the swimmers. The official also said the station manager asked a customer for help with translation, and asked for money to pay for the broken door.

Veloso declined to say whether the guards pulled their weapons, but said they did not use excessive force and would have been justified in drawing their guns because the athletes were large, strong men who “were conducting themselves in a violent way.”

“One of them was extremely upset, so if there was the use of an arm it was to contain them,” Veloso said. “It was obviously never fired.”

The people at the gas station didn’t speak English and the athletes didn’t speak Portuguese, causing “confusion” in the situation. Veloso said. Still, Veloso said he took issue with the way Lochte and the other athletes conducted themselves after the incident.

“Rio residents saw the name of their city sullied by this fantasy version (of events),” Veloso said. “It would be noble and worthy of them to apologize.”

Lochte’s attorney, Jeff Ostrow, has maintained that there is no question the robbery occurred. He, as well as Lochte’s father and agent, did not return phone calls seeking comment.

After days of confusion, the situation escalated late Wednesday night when Conger and Bentz were pulled from a flight at the Rio de Janeiro airport.

The official also told the AP that Conger and Bentz said in interviews after they were taken off the plane that the story of the robbery had been fabricated.

However, on Thursday, Bentz and Conger checked in for a flight leaving Brazil, after testifying about claims they were robbed after a late night of partying.

Associated Press journalists saw Bentz and Conger checking in late Thursday for a flight leaving the country. They were whisked through security and did not have to wait in line.

“On behalf of the United States Olympic Committee, we apologize to our hosts in Rio and the people of Brazil for this distracting ordeal in the midst of what should rightly be a celebration of excellence,” the statement read.

In the statement Blackmun said the passports of Conger and Bentz have been released, and they recently departed Rio.

“After providing a statement earlier in the week, a third (James Feigen) provided a revised statement this evening with the hope of securing the release of his passport as soon as possible,” the statement from Blackmun read.

Blackmun continued to describe what is believed to have happened that night: “ As we understand it, the four athletes (Bentz, Conger, Feigen and Ryan Lochte) left France House early in the morning of August 14 in a taxi headed to the Olympic Village. They stopped at a gas station to use the restroom, where one of the athletes committed an act of vandalism. An argument ensued between the athletes and two armed gas station security staff, who displayed their weapons, ordered the athletes from their vehicle and demanded the athletes provide a monetary payment. Once the security officials received money from the athletes, the athletes were allowed to leave,” the statement read.

“The behavior of these athletes is not acceptable, nor does it represent the values of Team USA or the conduct of the vast majority of its members. We will further review the matter, and any potential consequences for the athletes, when we return to the United States,” the statement continued.

“The last five days have been difficult for our USA Swimming and United States Olympic families,” the statement read. “While we are thankful our athletes are safe, we do not condone the lapse in judgement and conduct that led us to this point. It is not representative of what is expected as Olympians, as Americans, as swimmers and as individuals.”

Wielgus said the incident will go under a thorough review.

“USA Swimming will undergo a thorough review of the incident and determine any further actions, per our Code of Conduct,” the statement read.

Brazilian authorities pressed the American swimmers over the ever-changing account of the robbery. Police said the swimmers were unable to provide key details in early interviews and they found little evidence to support the robbery claim.

The swimmers said they had been intoxicated and could not remember what type and color of taxi they rode, where the incident happened or what time the events occurred, police said. The police official told the AP officers grew suspicious when they reviewed security video of the swimmers returning to the athletes village and saw them wearing watches, which would have likely been taken in a robbery.

Brazilian authorities note the men do not appear shaken and even joke around, CBS News correspondent Ben Tracy reported.

“And then the guy pulled out his gun, he cocked it, put it to my forehead and he said, ‘Get down,’ and I put my hands up, I was like ‘whatever.’ He took our money, he took my wallet -- he left my cellphone, he left my credentials.”

But Lochte backed off some of those claims as the week went on, saying the taxi wasn’t pulled over by men with a badge but rather the athletes were robbed after stopping at a gas station. Lochte also said the assailant pointed a gun at him rather than putting it to his head.

Authorities said that after the incident, the swimmers did not call police; officers began investigating after they saw media reports in which Lochte’s mother spoke about the incident.

Lochte told USA Today that he and his teammates didn’t initially tell U.S. Olympic officials about the robbery because “we were afraid we’d get in trouble.”

The debacle prompted both wild speculation and social media mockery, but all of that quickly turned to scorn after the official account went public. #LochteGate was trending on Twitter, with users sharing video footage from gas station security cameras and posting comments about white privilege and rude Americans.

David Fleischer, a political scientist at the University of Brasilia, said the incident touched a nerve in Brazil because of the country’s history of urban violence and cases of people impersonating police and committing crimes.

“The story did have some sense of validity but it didn’t bear out and it made them look bad worldwide,” he said.

While he’s medaled often in the Olympic pool, Lochte’s accomplishments have long been overshadowed by teammate Michael Phelps -- the most decorated Olympian in history. Lochte won a gold in Rio in a relay race alongside Phelps. He is a 12-time Olympic medalist.

The swimmers could potentially face punishment -- probation, suspension, a fine or expulsion -- under USA Swimming’s code of conduct, which prohibits dishonesty or fraud.

It was not clear if the swimmers would face criminal charges.