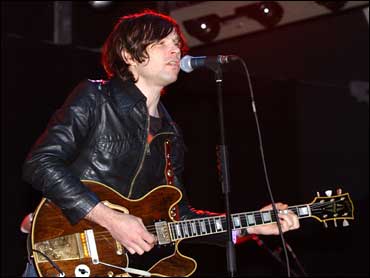 You can take the boy out of New York, but you can't take the New York out of the boy.

Ryan Adams, an American alternative country singer-songwriter and a longtime New Yorker, pitched another fit for a Minneapolis audience, a few years after his last local meltdown.

Throughout a show Thursday night, the 32-year-old singer-guitarist complained about the sound monitors onstage at the State Theatre. At one point, he moved two monitors, his microphone and his guitar pedals.

After 70 minutes he'd had enough. Adams announced "the last song," played it and didn't return for an encore. Many fans stood and booed.

"I don't know what the story was," guitarist Neal Casal told the Star Tribune afterward. "I just play guitar."

Adams recently released his album "Easy Tiger," which is likely the songwriter's last new disc for Lost Highway Records. Adams fiercely defends his output and behavior during the past decade, even as he openly worries that his erratic image may permanently overshadow his music.

Raised by his mother and grandmother in Jaksonville, N.C., Adams dropped out of school at age 16 and began jamming with a bunch of bands. After heading to Raleigh, N.C., he joined the band Whiskeytown.

Adams then decided to become a solo act and released "Heartbreaker" in 2000. He is widely known for his song, "New York, New York," which is on his 2001 release "Gold."