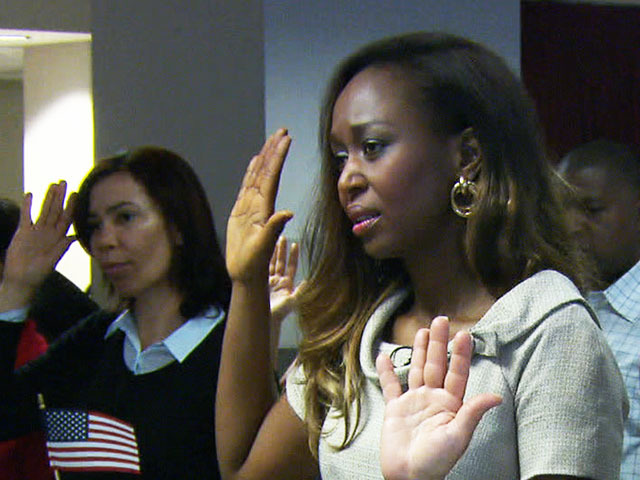 (CBS News) NEW YORK -- People come here from all over the world, yearning to taste America's freedom. A survivor of the genocide in Rwanda achieved her American dream Wednesday. We first met her on "60 Minutes" in 2006.

Immaculee Ilibagiza says her journey from Rwanda to America was more complicated than just getting on a plane.

She says she let go of it "when I was like, 'God, I just wish I remembered how to smile again. I'm a monster.'"

Immaculee had already begun smiling when we strolled with her seven years ago along Rwanda's green and lovely hills. But the images of what once happened there are still with her and will never go away.

"I remember looking up to the hill, and I saw somebody actually with a machete cutting somebody," she told us.

Watch: Bob Simon tells the story of Immaculee Ilibagiza, a Tutsi woman who survived Rwanda's genocide by the Hutus in 1994, below.

It was more than a decade since the massacre and she was finally ready to describe how she and six others survived with the help of a Hutu minister.

"So when he took us in the bathroom, I was like, 'Oh my God, I will be saved here. This bathroom is so hidden that we're going to be saved," she said.

They spent three months there and would have stayed longer, but French troops had finally arrived and set up a camp a few miles away.

Immaculee now lives in New York with her two children. She travels the world giving inspirational talks on forgiveness. Twice a year, she takes Americans to Rwanda -- to the scenes of the massacre.

"It's pure hatred," she said when asked how she explains what happened in Rwanda. "It's really pure hatred. When you start to see another human being as less than you, it's a danger."

But Immaculee is out of there now. Not only that -- she is now a U.S. citizen.

"I love the American dream," she said. "I feel this is the place I was supposed to be in. It's beautiful. I love it."

From Rwanda to New York, from hate to love -- a pretty good trip.