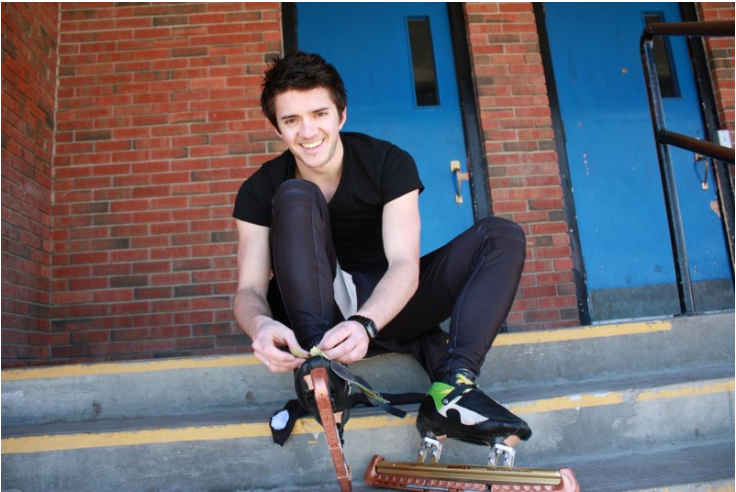 Openly gay speed skater Blake Skjellerup, who is hoping to represent New Zealand at the 2014 Winter Olympics in Sochi, Russia, said Wednesday that he is unwilling to play down his sexuality in light of Russia's anti-gay laws.

If he makes the 2014 games, which take place in February, Skjellerup is vowing to wear a gay pride pin from the 2012 Olympic games while in Sochi - despite the passage of a law last month banning "propaganda of nontraditional sexual relations," which would seem to include public displays of affection by same-sex partners and statements in support of gay rights. According to Pravda, the law allows for the deportation of foreign nationals for what is deemed to be homosexual propaganda. The Associated Press reported that under the law, foreign nationals could be detained for 15 days before deportation.

Skjellerup competed at the 2010 Olympic games and has won six national titles in New Zealand. He said his message to Russian President Vladimir Putin, who signed the law, "would be know me before you judge me, and love is love, and I don't think anybody should be persecuted."

Last Friday, the International Olympic Committee said in a statement that it "has received assurances from the highest level of government in Russia that the legislation will not affect those attending or taking part in the Games." The IOC added that it was unclear "whether and how [the legislation] will be implemented, particularly as regards the Games in Sochi."

This week, however, a Russian lawmaker said the law will be enforced at the Games. In comments to Interfax that were translated by Gay Star News, Vitaly Milonov, who co-sponsored the bill, said that "[i]f a law has been approved by the federal legislature and signed by the president, then the government has no right to suspend it. It doesn't have the authority." And on Thursday, Russian Sports Minister Vitaly Mutko  said the law would be enforced during the Games.

"An athlete of nontraditional sexual orientation isn't banned from coming to Sochi," he told Russian state news agency RIA Novosti, as reported by the Associated Press. "But if he goes out into the streets and starts to propagandize, then of course he will be held accountable."

The anti-gay laws have led some to call for a boycott of the Games, something Skjellerup strongly opposes. (There have also been calls to boycott Russian vodka, with many gay bars joining the boycott.)

"I and the other athletes have worked very, very hard and to have that taken away from you would be truly devastating," Skjellerup said, adding that his presence and that of other gay and pro-gay athletes in Russia would be far more valuable.

Russia has seen an outbreak of violence against gay rights advocates, with LGBT supporters facing beatings from anti-gay protesters. Violence against gay Russians has been a longstanding issue, and at least two murders seemingly motivated by anti-gay sentiment taking place this year.

The U.S. Olympic committee did not respond to a request for comment over whether it will provide guidance for athletes or tourists traveling to Sochi concerning the laws. Asked what he would tell gay tourists who plan to travel to the Games, Skjellerup said that "[i]f you feel that your security and your security is threatened, that's the most important thing to ensure that you're safe." In a letter obtained by Buzzfeed and dated July 25, U.S Olympic Committee CEO Scott Blackmun wrote that the USOC is "engaged in active discussions with the International Olympic Committee and the U.S. State Department" concerning Americans' safety while in Russia for the Olympics.