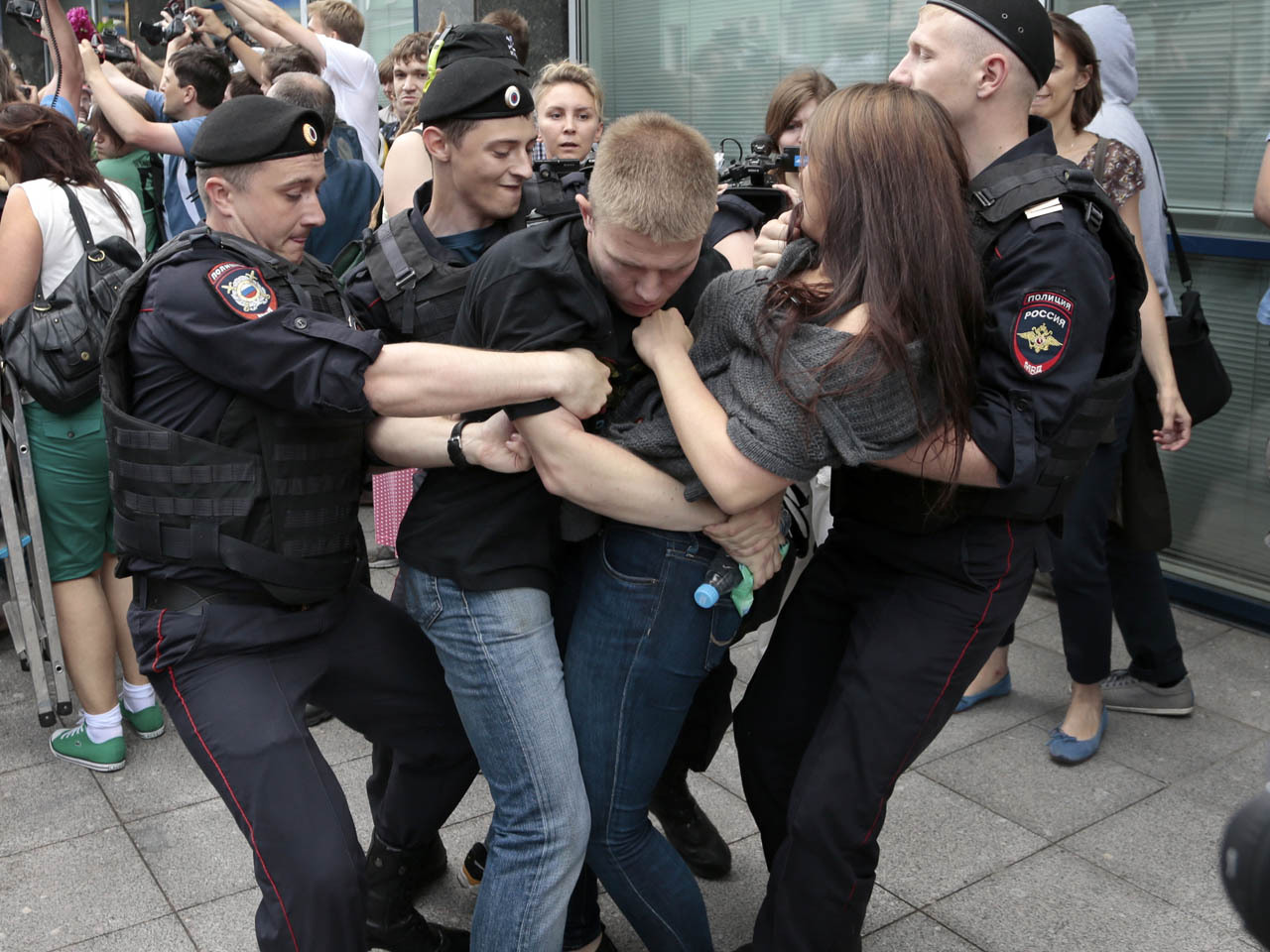 MOSCOW A bill that stigmatizes Russia's gay community and bans the distribution of information about homosexuality to children was overwhelmingly approved by the lower house of parliament Tuesday.

More than two dozen protesters were attacked by anti-gay activists and then detained by police, hours before the State Duma approved the Kremlin-backed legislation in a 436-0 vote.

The bill banning "propaganda of nontraditional sexual relations" still needs to be passed by the appointed upper house and signed into law by President Vladimir Putin, but neither step is in doubt.

The measure is part of an effort to promote traditional Russian values as opposed to Western liberalism, which the Kremlin and the Russian Orthodox Church see as corrupting Russian youth and contributing to the protests against Putin's rule.

The only parliament member to abstain Tuesday was Ilya Ponomaryov, who has supported the protest movement to the aggravation of the leadership of his pro-Kremlin party.

Before the vote, gay rights activists attempted to hold a "kissing rally" outside the State Duma, located across the street from Red Square in central Moscow, but they were attacked by hundreds of Orthodox Christian activists and members of pro-Kremlin youth groups. The mostly burly young men with closely cropped hair pelted them with eggs while shouting obscenities and homophobic slurs.

Riot police moved in, detaining more than two dozen protesters, almost all of them gay rights activists. Some who were not detained were beaten by masked men on a central street about a mile away.

The legislation will impose hefty fines for providing information about the lesbian, gay, bisexual and transgender, or LGBT, community to minors or holding gay pride rallies. Breaching the law will carry a fine of up to 5,000 rubles ($156) for an individual and up to 1 million rubles ($31,000) for media organizations.

After the bill was given preliminary approval in January, lawmakers changed the wording of "homosexual propaganda" to "propaganda of nontraditional sexual relations," which backers of the bill defined as "relations not conducive to procreation."

Earlier Tuesday, dozens of anti-gay activists picketed the Duma. One of them held a poster that read: "Lawmakers, protect the people from perverts!" while others held Orthodox icons and chanted prayers.

Russian and foreign rights activists have decried the bill as violating basic rights.

"Russia is trying very hard to make discrimination look respectable by calling it `tradition,' but whatever term is used in the bill, it remains discrimination and a violation of the basic human rights of LGBT people," Graeme Reid, LGBT rights program director at Human Rights Watch, said Tuesday in a statement.

Russian officials have rejected the criticism. Foreign Minister Sergey Lavrov defended the bill in February, saying that Russia does not have any international or European commitment to "allow propaganda of homosexuality."

The widespread hostility to homosexuality is shared by much of Russia's political and religious elite.

Lawmakers have accused gays of decreasing Russia's already low birth rates and said they should be barred from government jobs, undergo forced medical treatment or be exiled.

An executive with a government-run television network said in a nationally televised talk show that gays should be prohibited from donating blood, sperm and organs for transplants, while after their death their hearts should be burned or buried.

The bill's adoption comes 20 years after a Stalinist-era law punishing homosexuality with up to five years in prison was removed from Russia's penal code as part of the democratic reforms that followed the Soviet Union's collapse.