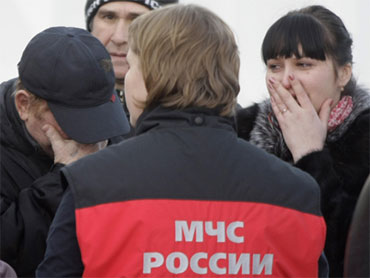 A blaze sparked by onstage fireworks tore through a nightclub ceiling covered in decorative twigs and plastic sheeting early Saturday, killing at least 109 people and critically injuring about 90 in Russia's deadliest fire since the fall of the Soviet Union, witnesses and officials said.

Many victims died in a panicked crush for the single exit as they attempted to escape the flames and thick black smoke, witnesses said.

Hundreds of people had gathered at the Lame Horse nightclub Friday night to celebrate the anniversary of the popular establishment's opening in the industrial city of Perm in the Ural Mountains.

Video recorded by a clubgoer and shown on Russian television showed partygoers dancing, before sparks from pyrotechnic fountains on stage ignited the club's ceiling around midnight. Witness Svetlana Kuvshinova told The Associated Press that the blaze swiftly consumed twigs decorating the ceiling. Russian clubs and restaurants often cover ceilings with plastic insulation and a layer of willow twigs to create a rustic look.

"The fire took seconds to spread," Kuvshinova said. "It was like a dry haystack. There was only one way out. They nearly stampeded me."

Leonid Miroshnichenko, who lost his daughter in the fire, said that the plastic ceiling contributed to the death toll. "I would like to see the official who allowed this club to open. It was he who killed my daughter," he said.

The footage showed the fire spreading through what appeared to be willow twigs as a host shouted without urgency: "Ladies and gentlemen, guests of the club, we are on fire. Please leave the hall."

The video showed people reluctantly heading toward the exit, some of them turning back to look at the burning ceiling. Within seconds they started rushing away in panic as flames begin to spread faster.

"There was only one exit, and people starting breaking down the doors to get out," said a woman who identified herself only as Olga, smeared with soot and wearing a filthy fur coat. "They were breaking the door and panic set in. Everything was in smoke. I couldn't see anything."

A nightclub fire in the U.S. state of Rhode Island in 2003 killed 100 people after pyrotechnics used as a stage prop by the 1980s rock band Great White set ablaze cheap soundproofing foam on the walls and ceiling.

Russian officials said club managers had ignored repeated demands from authorities to change the interior to comply with fire safety standards. Emergency Situations Minister Sergei Shoigu told President Dmitry Medvedev by videoconference from Perm that the club managers violated the law by running the fireworks display that triggered the fire.

"The fire started in the ceiling and spread very quickly, lights went out and there was a panic and stampede," Shoigu said. He added the club managers had been fined twice in the past for breaking fire safety regulations and were to report on fixing the flaws next Monday.

"They have neither brains, nor conscience," Medvedev said, urging the toughest possible punishment. He declared a national day of mourning Monday.

Authorities said they arrested the registered co-owner of the club, its managing director and three other suspects. One other suspect was injured in the fire and remains in critical condition.

Russia has been on edge since last week's bombing of the high-speed Nevsky Express passenger train midway between Moscow and St. Petersburg, in which 27 people died in the first deadly terrorist attack outside Russia's restive Caucasus republics since 2004. Chechen rebels claimed responsibility for the blast.

"We are deeply saddened to learn of yet another tragedy striking Russia in the city of Perm," said the White House's National Security Council spokesman Mike Hammer. "Coming on the heels of the recent attack on the Moscow-St.Petersburg train, this significant loss of life and multiple casualties are especially painful."

Officials said nearly 90 of the more than 130 people injured in the fire had severe burns and remained in critical condition. Many of the injured were flown to Moscow's top emergency hospitals.

Firefighters were on the scene in downtown Perm one minute after the alarm was called in, the Emergency Situations Ministry said, and they took less than an hour to put the fire out. Most of the dead suffocated or were crushed at the exit, officials said.

Many relatives waited for hours at the Perm morgue, not knowing whether their relatives were dead or alive.

"I'm simply devastated, I can't believe it's happening to me," said Yevgeny Porfiryev, his eyes red from tears after he found his 26-year-old son Timur among the dead.

Enforcement of fire safety standards is notoriously lax in Russia and there have been several catastrophic blazes at drug-treatment facilities, nursing homes, apartment buildings and nightclubs in recent years.

Russia records up to 18,000 fire deaths a year, several times the per-capita rate in the United States and other Western countries. Nightclub fires have killed thousands of people worldwide.

Medvedev, who summoned top officials to report on the fire and rescue efforts, urged changes in the law to toughen punishment for violation of fire safety standards.