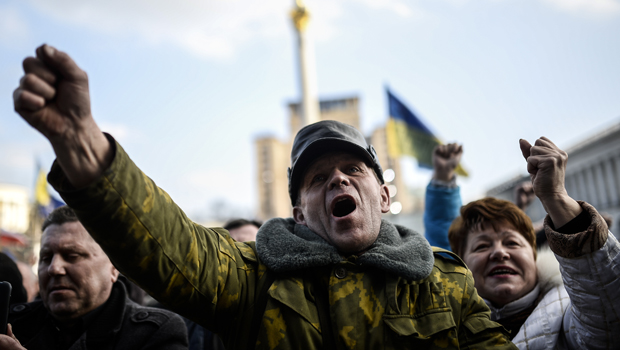 KIEV, Ukraine -- In a day that could significantly shift Ukraine's political destiny, opposition leaders signed a deal Friday with the country's beleaguered president that calls for early elections, a new constitution and a new unity government.

Russian officials immediately criticized the deal and protesters angry over police violence showed no sign of abandoning their sprawling camp in central Kiev.
President Barack Obama had had a hourlong telephone call with Russian President Vladimir Putin on Friday afternoon,  and the two leaders agreed the deal must be implemented quickly, a senior State Department official told CBS News.

Putin told Obama he wanted the agreement to succeed and that he would work with the United States and European nations to help the deal work, the official said.

The White House said the two leaders spoke about a number of different issues.

"On Ukraine, they exchanged views on the need to implement quickly the political agreement reached today in Kiev, the importance of stabilizing the economic situation and undertaking necessary reforms, and the need for all sides to refrain from further violence," the White House said in a statement.

CBS News correspondent Holly Williams reported from Kiev that before the agreement was signed there were scuffles Friday morning in Ukraine's Parliament as opposition members called for snap presidential elections. Some protesters in Kiev's Independence Square told CBS News that they were staying put until President Viktor Yanukovych was removed from power.

Protester Alim Solodkiy told Williams he intended to remain in the square until Yanukovych is arrested.

"Most of the people leave the square if it happens and we will celebrate a great victory of Ukraine," he said. "Maybe after this interview I can be arrested, but I don't scare anymore."

If the deal holds, the ambitious agreement could be a major breakthrough in a months-long crisis over Ukraine's future, a standoff that worsened sharply this week and left scores dead and hundreds wounded in the worst violence the country has since seen it became independent in 1991.
Within hours of the signing, Ukraine's parliament voted to restore the 2004 constitution that limits presidential powers, clawing back some of the powers that Yanukovych had pushed through after being elected in 2010.

Although Yanukovych retains an apparent majority in parliament, his powers are now significantly reduced. Lawmakers also approved an amnesty for protesters involve in violence during a months-long standoff over Ukraine's future.

The newly empowered legislators in the Verhovna Rada also voted to allow the release of jailed opposition figure and former Ukrainian Prime Minister Yulia Tymoshenko.
The parliament also voted to remove Interior Minister Vitali Zakharchenko, who was widely blamed for ordering police violence against demonstrators and is deeply despised by the protesters, whom he calls extremists.

European foreign ministers spent two days and all night trying to negotiate an end to the months-long standoff, prompted when Yanukovych aborted a pact with the European Union in November in favor of close ties with Russia instead.

In Washington, the White House hailed the agreement in a statement and said it would be monitoring its implementation closely.
"There must be accountability for those responsible for the violence and the casualties that have resulted since the crisis began, and we remain prepared to impose additional sanctions as necessary," the statement read. "The United States stands with the Ukrainian people as they work to restore peace, security and human dignity across the country and determine the future course of their nation."

The U.S., Russia and European Union are deeply concerned about the future of Ukraine, a nation of 46 million that has divided loyalties between Russia and the West.

British Foreign Secretary William Hague hailed the deal. "I urge all sides to adhere to the agreement in good faith to ensure a peaceful political settlement," he said.

The agreement signed Friday says presidential elections will be held no later than December, instead of March 2015 as scheduled. Many protesters say December is too late - they want Yanukovych out immediately.

The deal says the government will not impose a state of emergency and both sides will refrain from violence. It says opposition protesters should hand over any weapons and withdraw from buildings they have occupied and protest camps around the country.
It is far from clear that the thousands of protesters camped out in Kiev on Friday will pack up and go home. One by one, protesters took to a stage on Independence Square to say they're not happy and didn't get what they wanted.

The capital remained tense. Shots were heard Friday morning, a day after the deadliest violence in Ukraine's post-Soviet history. It is unclear who was targeted and whether anyone was hurt or injured in Friday's incident.

The leader of a radical group that has been a driver of violent clashes with police, Pravy Sektor, said Friday he doesn't believe Yanukovych will honor the deal and "the national revolution will continue," according to the Interfax news agency.

The deal has other detractors too.

Leonid Slutsky, the chairman of the committee in charge of relations with other ex-Soviet nations in the lower house of Russian parliament, told reporters Friday that the agreement serves the interests of the West.

"We realize where and by whom this agreement has been written. It's entirely in the interests of the United States and other powers, who want to split Ukraine from Russia," he said.

At the same time, Slutsky shrugged off claims that Russia could send its troops to Ukraine, saying Moscow will communicate with any government Ukraine has.

"No matter how bad and hard to deal with the new government is for us, we will deal with it," he said. "We must learn from mistakes we have made."

Protesters across the country are upset over corruption in Ukraine, the lack of democratic rights and the country's ailing economy, which just barely avoided bankruptcy with the first disbursement of a $15 billion bailout promised by Russia.

The violence is making Ukraine's dire economic troubles worse. Ratings agency Standard & Poor's downgraded Ukraine's debt rating Friday, saying the country will likely default if there are no significant improvements in the political crisis, which it does not expect.