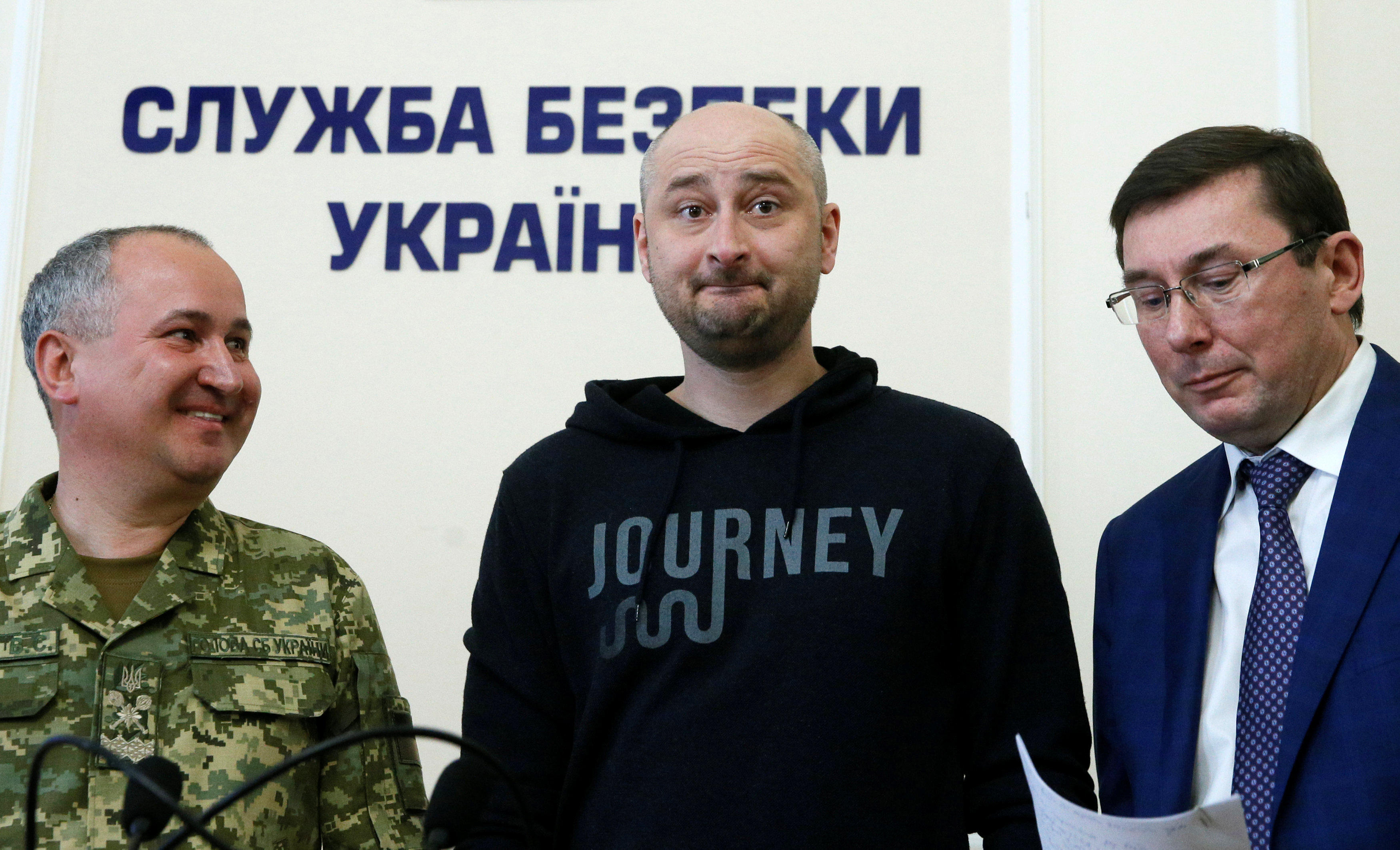 KIEV, Ukraine -- Russian journalist Arkady Babchenko, who was reportedly gunned down in Kiev, Ukraine, strolled into a news conference that authorities called Wednesday to discuss the investigation of his death. They revealed that the slaying had been staged to foil an alleged Kremlin hit plot.

"I'm still alive," Babchenko, 41, told startled fellow reporters at the news conference held less than a day after police reported he had been shot and killed at his Kiev apartment building.

Ukrainian police said Tuesday that Babchenko, a strong critic of the Kremlin, was shot multiple times in the back Tuesday, found bleeding there by his wife and died on the way to the hospital. Kiev's police chief said he suspected the journalist was killed because of his work.

Details of the sting operation were not clear, including why authorities decided to go to such lengths to make it look as if Babchenko was dead. The head of the Ukrainian Security Service said the suspected organizer of the alleged hit plot was detained Wednesday, suggesting the bogus killing was aimed at flushing him out.

Babchenko apologized to his wife, who he said was not briefed on the scheme in advance, "for the hell she had to go through in the past two days. There was no choice there, either."

The astonishing turn of events brought harsh criticism from Russia and the international media advocacy group Reporters Without Borders.

The journalist group's director, Christophe Deloire, expressed on Twitter his "deepest indignation at the discovery of the manipulation of the Ukrainian secret services. It is always deeply dangerous for states to play with the facts."

The group told CBS News that the staged murder was "distressing."

"While the reappearance of the reporter may be a great relief, it is deeply regrettable that Ukraine's authorities have played with the truth, no matter their motive," the group said.

Konstantin Kosachev, head of the international affairs committee of the upper house of the Russian parliament, compared Ukraine's allegations to Britain's claims that Moscow was behind the nerve gas poisonings of a Russian former spy and his daughter in England. Russia vehemently denies poisoning Sergei Skripal and his daughter, Yulia Skripal.

"The logic is the same - to defame Russia," Kosachev told the state news agency Tass.

Neither Babchenko nor Ukrainian Security Service chief Vasyl Gritsak provided details of how they staged Babchenko's injuries or made his wife believe he was dead.

The movie-like twist came as Gritsak convened the news conference to announce the security agency and the police had solved Babchenko's reported slaying. He then confused everyone there by inviting the supposed slaying victim into the room.

To applause and gasps, Babchenko took the floor and apologized to the friends and family who mourned for him and were unaware of the plan.

"I'm still alive," he said. "I know that sickening feeling when you bury a colleague. I'm sorry you had to go through this but there was no other way."

Before ushering Babchenko into the room for the big reveal, Gritsak said investigators had identified a Ukrainian citizen who allegedly was paid $40,000 by the Russian security service to organize and carry out the hit. The unidentified Ukrainian man in turn allegedly hired an acquaintance to be the gunman, Gritsak said.

The man allegedly paid to organize Banchenko's killing was detained Wednesday, he said, showing a video of the arrest.

Gritsak said killing Babchenko was part of a larger alleged plot by Russian security services. The Ukrainian man also was supposed to procure large quantities of weapons and explosives, including 300 AK-47 rifles and "hundreds of kilos of explosives," to perpetrate acts of terror in Ukraine, he said.

Babchenko said he was not allowed to go into the details of his false death. He said Ukrainian law enforcement had been aware of a contract on his head for two months. He said he was approached by the Ukrainian Security Service, or SBU, a month ago.

"The important thing is my life has been saved and other, bigger terrorist attacks have been thwarted," he said.

Also Wednesday, another prominent critic of the Kremlin said Russia was abusing an Interpol system of warrants that caused him to be briefly detained in Spain. Bill Browder, a U.S-born investor based in London, said he was in the Spanish capital of Madrid to share evidence with prosecutors on money laundered in the southern European country by Russian criminal gangs.

Babchenko, one of Russia's best-known war reporters, fled the country in February 2017. He spoke and wrote about needing to leave Russia because of threats against him and his family. He said his home address was published online and the threats he received were made by phone, email and social media.

Moscow's annexation of Crimea and support for separatist insurgents in eastern Ukraine were topics on which the journalist was scathingly critical of the Kremlin. His flight from Russia came several months after he wrote in a Facebook post that he wasn't sorry members of a military band and state television journalists died in a plane crash on their way to Russia's military base in Syria.

Several Russian lawmakers said at the time that Babchenko should be stripped of his citizenship over the comment, and Russian state media called him a traitor.

Ilya Ponomarev, a former Russian lawmaker who also moved to Ukraine, said Babchenko continued being threatened after he settled last fall in Kiev, where he worked as a host for the Crimean Tatar TV station.

Babchenko did not take the intimidation too seriously, Ponomarev said Wednesday before the fact that the slaying was staged came out.

Hours before pretending to have been fatally shot, Babchenko wrote on Facebook that he narrowly escaped death exactly four years ago when the Ukrainian military refused to take him on a helicopter heading to the front line in eastern Ukraine. The aircraft was shot down minutes later.

"I was lucky, it was my second birthday," he wrote Tuesday.