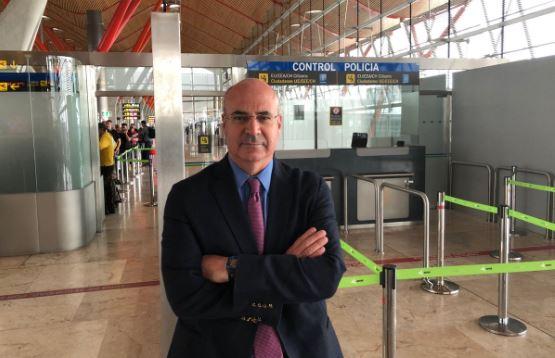 Businessman Bill Browder, who was once the biggest foreign investor in Russia but has become a vocal critic of the country and clashed with President Vladimir Putin's government, said Wednesday that he was detained briefly in Spain on a Russian arrest warrant. Browder, an American-born financier based in the U.K., told CBS News Radio after his release that Russia should be expelled from the international police network Interpol for "abusing" it to have him detained.

Browder, who has said Putin directly orchestrated a Kremlin attempt to influence the presidential campaign of Donald Trump in 2016, tweeted on Wednesday morning that he'd been arrested on an Interpol warrant, but the law enforcement body denied involvement.

"Just was arrested by Spanish police in Madrid on a Russian Interpol arrest warrant. Going to the police station right now," Browder said on Twitter, adding that the police would not tell him which station he was being taken to. He posted a photo taken from the back of the police car.

Not long after the tweets, the Spanish police told The Associated Press and Reuters news agencies that Browder was not under arrest, had been released from a station in Madrid, and appeared to have been picked up on an expired warrant.

Browder himself then re-emerged on Twitter, confirming his release and accusing Russia of having "abused" Interpol for a sixth time in efforts to have him arrested.

Interpol referred questions about Browder's detention to the Spanish authorities.

In a later tweet, Browder said the Spanish national police had told him he was being detained on a "new" Interpol "Red Notice" issued on behalf of Russia. Browder claimed earlier that he was released by the Spanish police after the "Interpol General Secretary in Lyon advised them not to honor" the new Red Notice. An Interpol Red Notice is the instrument of arrest used by the international police conglomeration; it is issued as a formal request for a member state's domestic forces to apprehend a named individual.

He later posted a photo of himself at the airport, saying he had been cleared to fly out of the country back to his home in London "without any further problems." He repeated that he had been told he was detained on a new, active Red Notice at Russia's behest, and he criticized the law enforcement agency as being "incapable of stopping Russian abuse of their systems."

"Russia should be expelled from Interpol," Browder told CBS News Radio on the phone before he left Madrid. "They have abused Interpol so many different times now, and Interpol clearly doesn't have the systems to prevent it. I'm the prime example, and Russia should no longer have access to the Interpol system."

"What's behind this arrest is a high-level political persecution from Vladimir Putin," Browder said, calling it direct retribution for his work in getting the Magnitsky Act passed by the U.S. Congress.

"I'm also involved in having initiated 15 money laundering investigations in 15 different countries connected to Putin and his cronies having received money from the crime that Sergey Magnitsky was murdered over," added the financier.

Browder, CEO of Hermitage Capital, has become a major antagonist to the Kremlin in recent years, routinely criticizing Vladimir Putin's government for silencing critics and highlighting the alarming rate at which journalists have been attacked in the country.

The last tweet Browder sent before he was detained on Wednesday was a re-tweet of someone lamenting the apparent death of yet another journalist who had been critical of the Kremlin. Ukrainian police said Arkady Babchenko was gunned down in Kiev on Tuesday -- the city to which he had recently fled from Russia, fearing for his life.

Browder retweeted a message from American journalist Julia Davis which said in part, "opposition activists who dare to imagine #Russia without Putin are being assassinated, one by one." In a bizarre turn of events, however, Ukrainian officials admitted on Wednesday that the murder of Babchenko had been faked, purportedly in an effort to thwart an actual assassination attempt.

Browder has also challenged Moscow's flat denial of efforts to meddle in the 2016 U.S. election process.

Last summer, as President Trump defend his oldest son for meeting with a Russian lawyer at Trump Tower during the campaign, Browder told "CBS This Morning" that Russian lawyer Natalia Veselnitskaya, who met with Trump Jr. in June 2016, "was taking money from a Russian oligarch, who is close to Putin, to try to overturn the Magnitsky Act."

Trump Jr. has said the meeting was primarily about the Magnitsky Act. The U.S. law, passed in 2012, imposes economic sanctions and travel restrictions on Russians named as human rights abusers.

The act is named after Russian tax attorney Sergei Magnitsky, who worked to expose corruption among people linked to the Kremlin. He died in 2009 while being held in a Russian prison. The Russian government says the cause of death was heart failure, but many observers believe Magnitsky was murdered, including Browder, whose taxes Magnitsky handled.

Browder was a driving force behind getting the Magnitsky Act enshrined in law in the U.S. He believes it's Putin's No. 1 priority to get the U.S. to lift sanctions under the act, which currently affect 44 Russians.

Veselnitskaya hired Rinat Akhmetshin -- whom Browder described in July 2017 as a "shady former Soviet spy, current spy, Washington operator" -- and organized a full-on lobbying campaign, "hiring the top lobbyists, the top law firms, the top PR firms," to try and get rid of the act.

The Trump family claims nothing came of the meeting. Then-White House chief of staff Reince Priebus called it a "big nothing burger."

"Let's just look at it very simply," Browder told CBS News. "Vladimir Putin wants to get rid of this act that's going to sanction his assets. It's his top priority. He assigns an oligarch to go in and spend all the money to get rid of it. The Russian KBG is not stupid. They want something in return."

"We don't know what happened in that meeting," he continued. "We don't know who said what to whom because you can't trust the Russians, and the Trump people keep changing their story, so, who knows what kind of burger it is."

"They were spending money on every different legal motion they could come up with," he continued. "They were hiring lobbyists left and right and center."

"They were getting Donald Trump Jr., all on behalf of Vladimir Putin, to get rid of the Magnitsky Act," Browder alleged.

When asked if he believed there was collusion between the Trump campaign and Russia to impact the American election, Browder replied: "I have no idea. All I can say is I know the Russian side intimately and I can tell you this was a highly resourced operation to get rid of a piece of legislation that would affect Vladimir Putin personally."

The dispute over the Magnitsky Act sanctions wound up entangling some American families who were seeking to adopt children from Russian orphanages.

"Vladimir Putin was so angry about the Magnitsky Act that he was looking for some type of retaliation," Browder explained. "He couldn't freeze assets or other types of things because the Americans would retaliate against that. And so he came up with the most heartless, vindictive thing he could do, which was Americans were adopting disabled Russian orphans, and he said, 'No, you can't adopt them anymore.'"

According to Browder, at that time about 500 American families had met sick babies and children who were "longing to go home to America." Some ended up dying in orphanages because they weren't being treated properly.

Browder also addressed the fact that he's been "threatened on a number of occasions by agents of the Russian government."