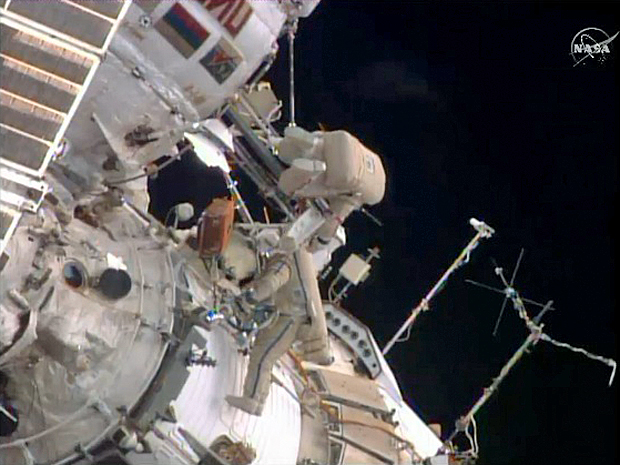 With the nanosat deployed, the cosmonauts made their way to a work platform on the Zvezda command module where they attached the Expose-R experiment. Loaded with a variety of biological samples ranging from plant seeds to spores, fungi and ferns, the experiment package will remain in place for 18 months to help researchers study the long-term effects of the space environment.

After installing a clamp to help secure an automated phased array antenna that was mounted outside the station during an earlier spacewalk, Skvortsov and Artemyev collected samples of rocket plume residue from a command module window and then installed equipment to help measure the long-term effects of plume impingement on the upper Poisk module.

With that work complete, the spacewalkers removed and replaced several other space exposure experiment trays carrying a variety of materials. The cosmonauts ran ahead of schedule throughout the spacewalk and ended the excursion more than an hour earlier than originally planned.

"Thank you very much, guys, for your work," a Russian flight controller radioed.

NASA had planned to carry out two U.S. spacewalks of its own this month, one to move a failed pump module to a long-term storage position on the station's solar power truss and the other to replace a critical solar array electrical component. But the EVAs were put on hold pending arrival of replacement spacesuit batteries.

Wiseman and astronaut Barry "Butch" Wilmore, scheduled for launch aboard a Russian Soyuz spacecraft Sept. 25, then would be clear to carry out the pump relocation spacewalk later in October.

Of the two planned spacewalks, the SSU replacement is the most critical for NASA. The space station has been operating with seven of its eight major solar power feeds since early May because of problems with one of the eight sequential shunt units used to regulate solar array output.

Equipment on power channel 3A had to be switched over to power channel 3B in May and while that has not caused any major problems for the station, mission managers want to replace the suspect SSU as soon as possible to avoid major powerdowns in the event of another failure.

The replacement work is relatively straight forward, but the new spacesuit batteries are required. And the SSU swap-out must be done when the station is in Earth's shadow and the arrays are not generating power. The orientation of the station's orbit with respect to the sun will periodically ensure extended night passes in October.