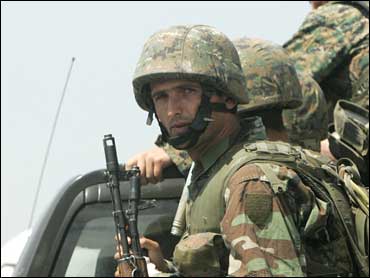 Russia expanded its bombing blitz to the Georgian capital, deployed ships off the coast and, a Georgian official said, sent tanks from the separatist region of South Ossetia into Georgian territory, heading toward a border city before being turned back.

The Russian Defense Ministry refused to comment to The Associated Press on the reports of the sinking and Georgian officials could not immediately be reached. If confirmed, it could mark a serious escalation of the fighting that has raged between Russia and Georgia over South Ossetia.

Georgia called a cease-fire and said its troops were retreating Sunday from the disputed province of South Ossetia in the face of Russia's far superior firepower, but Russia said the soldiers were "not withdrawing but regrouping" and refused to recognize a truce.

International envoys headed in to try to end the fighting between Russia and its small U.S.-allied neighbor that erupted last week in the Russian-backed separatist region.

The announcement of a retreat came after Russia expanded its bombing blitz Sunday - targeting the area around the Georgian capital's international airport. Russia also deployed a naval squadron off another of Georgia's separatist regions, Abkhazia, and according to Georgia landed thousands of troops.

Georgian President Mikhail Saakashvili said one of the Russian raids on the airport came a half hour before the arrival of the foreign ministers of France and Finland - in the country to try to mediate.

Georgian Interior Ministry spokesman Temur Yakobashvili said Russian tanks tried to cross from South Ossetia into the territory of Georgia proper, but were turned back by Georgian forces. He said the tanks apparently were trying to approach Gori, but did not fire on the city of about 50,000.

Russia also sent naval vessels to patrol off Georgia's Black Sea coast, but denied Sunday that the move was aimed at establishing a blockade.

The ITAR-Tass news agency quoted a Russian Defense Ministry spokesman as saying that Georgian missile boats twice tried to attack Russian ships, which fired back and sank one of the Georgian vessels.

Georgia's Foreign Ministry said its soldiers were observing a cease-fire on orders of the president and declared the move in a note handed over to Russia's envoy to Tbilisi.

"Georgia expresses its readiness to immediately start negotiations with the Russian Federation on cease-fire and termination of hostilities," the ministry said in a statement.

During a Security Council meeting today, Russia's ambassador said his country is "ready to put an end to the war."

The U.N. Undersecretary-General for Political Affairs, Lynne Pascoe, told the council that Georgian officials are "ready for immediate talks" with Russia. He also said Georgia's offer to create a safe travel zone - or "humanitarian corridor" - for civilians, refugees and troops would help the negotiations.

But British Deputy Ambassador Karen Pierce questioned why Russia is unwilling to agree to an immediate cease-fire. And U.S. Ambassador Zalmay Khalilzad accused Russia of resisting attempts to make peace.

Georgia, whose troops have been trained by American soldiers, began an offensive to regain control over South Ossetia overnight Friday, launching heavy rocket and artillery fire and air strikes that pounded the provincial capital, Tskhinvali.

In response, Russia, which has granted passports to most South Ossetians, launched overwhelming artillery shelling and air attacks on Georgian troops.

"The Georgian gambit of trying to push the Russians out of its breakaway border territories seems to have had the opposite effect of consolidating Russian control," reported CBS News correspondent Mark Phillips. "And it's still unclear whether this crisis can be contained with only the destruction and loss of life it has caused so far."

"We heard a plane go over and then a big explosion," said Malkhaz Chachanidze, a 41-year old ceramics artist whose house is located just outside the fence of the factory, which has been running since the Soviet era. "It woke us up, everything shook."

The risk of the conflict setting off a wider war increased when Russian-supported separatists in another breakaway region of Georgia, Abkhazia, launched air and artillery strikes on Georgian troops to drive them out of a small part of the province they control. Fifteen U.N. military observers were told to evacuate.

Both South Ossetia and Abkhazia have run their own affairs without international recognition since splitting from Georgia in the early 1990s and have built up ties with Moscow. Russia has granted its passports to most of their residents.

At the core of this conflict is Russian mistrust of Georgia's western leanings and its desire to join NATO, reports CBS News' Phillips.

President Bush called for an end to the Russian bombings and an immediate halt to the violence.

"The attacks are occurring in regions of Georgia far from the zone of conflict in South Ossetia. They mark a dangerous escalation in the crisis," Bush said in a statement to reporters while attending the Olympic Games in Beijing.

"President Bush has talked with French President Sarkozy, who's also the head of the EU right now, and officials say that the two men are on the same page, and that sort of gives us a sense of the parameters of what they expect to have happen," reports CBS News White House correspondent Jim Axelrod. "They say that what they must see in Georgia right now is a cease-fire, a de-escalation on the part of the Russians, and respect for Georgia's territorial integrity. So that gives you some sense of what the US and the West's position will be as they start to engage with the Russians."

De Hoop Scheffer is calling for talks to restore Georgia's control over its breakaway province.

In yet another sign that the conflict could widen, Ukraine warned Russia on Sunday it could bar Russian navy ships from returning to their base in the Crimea because of their deployment to Georgia's coast.

Karasin said the ships were sent toward Abkhazia as a deterrent.

"The deployment is quite natural. We don't want a repeat of what happened in South Ossetia," he said at a news conference.

The foreign ministers of France and Finland were to arrive in Georgia Sunday to discuss ways to end the conflict.

Russian jets have been roaming Georgia's skies since Friday. They raided several air bases and bombed the Black Sea port city of Poti, which has a sizable oil shipment facility. The Russian warplanes also struck near the Baku-Tbilisi-Ceyhan oil pipeline which carries Caspian crude to the West, but no supply interruptions have been reported.

Jim Jeffrey, Bush's deputy national security adviser, warned "if the disproportionate and dangerous escalation on the Russian side continues, that this will have a significant long-term impact on U.S.-Russian relations."

A Russian raid on Gori near South Ossetia Saturday which apparently targeted a military base on the town's outskirts left numerous civilian casualties.

An Associated Press reporter who visited the town shortly after the strike saw several apartment buildings in ruins, some still on fire, and scores of dead bodies and bloodied civilians. The elderly, women and children were among the victims.

Russian officials said they weren't targeting civilians, but Russia's Foreign Minister Sergey Lavrov said that Georgia brought the airstrikes upon itself by bombing civilians and Russian peacekeepers in South Ossetia. He warned that the small Caucasus country should expect more attacks.

"Whatever side is used to bomb civilians and the positions of peacekeepers, this side is not safe and they should know this," Lavrov said.

The U.N. Security Council planned to meet Sunday for the fourth time in four days to try to resolved the situation.

Karasin, Russia's deputy foreign minister, said more than 2,000 people had been killed in South Ossetia since Friday, most of them Ossetians with Russian passports. The figures could not be independently confirmed.

But residents of the provincial capital Tskhinvali who survived the bombardment by hiding in basements and later fled the city estimated that hundreds of civilians had died. They said bodies were lying everywhere.

"The reports from people is that it's an absolute nightmare. [Two kids] delivering food … made it out of South Ossetia but their parents didn't and they don't know if they are alive or dead because phones are down," David Womble of Worldvision told CBS News.

In Saturday's meeting with refugees in the city of Vladikavkaz across the border, Prime Minister Vladimir Putin described Georgia's actions as "complete genocide." Putin also said Georgia had effectively lost the right to rule the breakaway province - an indication Moscow could be preparing to fulfill South Ossetians' wish to be absorbed into Russia.

Georgia borders the Black Sea between Turkey and Russia and was ruled by Moscow for most of the two centuries preceding the breakup of the Soviet Union. Today, Russia has approximately 30 times more people than Georgia and 240 times the area.

Russia also laid much of the responsibility for ending the fighting on Washington, which has trained Georgian troops. Washington, in turned, blamed Russia.

Georgia said it has shot down 10 Russian planes, including four brought down Saturday, according to Lomaia. It also claimed to have captured two Russian pilots, who were shown on Georgian television.

Russian Col. Gen. Anatoly Nogovitsyn, deputy chief of the General Staff, confirmed Saturday that two Russian planes had been shot down, but did not say where or when.

Russian military commanders said 15 peacekeepers have been killed and about 150 wounded in South Ossetia, accusing Georgian troops of killing and wounding Russian peacekeepers when they seized Russian checkpoints. The allegations couldn't be independently confirmed.

In Abkhazia, the separatist government said it intended to push Georgian forces out of the Kodori Gorge. The northern part of the gorge is the only area of Abkhazia that has remained under Georgian government control.

Separatist forces also were concentrating on the border with Georgia's Zugdidi region, and Russia's NTV television reported that additional Russian troops landed in Abkhazia Sunday, heading in the same direction.

A senior U.S. military official says the Americans have begun flying Georgian troops home from Iraq after they requested help with transportation.

Georgia has called its 2,000 troops home from Iraq to help in the fighting against Russia.

The official says that the U.S. military has agreed to their request and "some flights have already begun."

The official spoke on condition of anonymity Sunday because he was releasing the information ahead of a formal announcement.