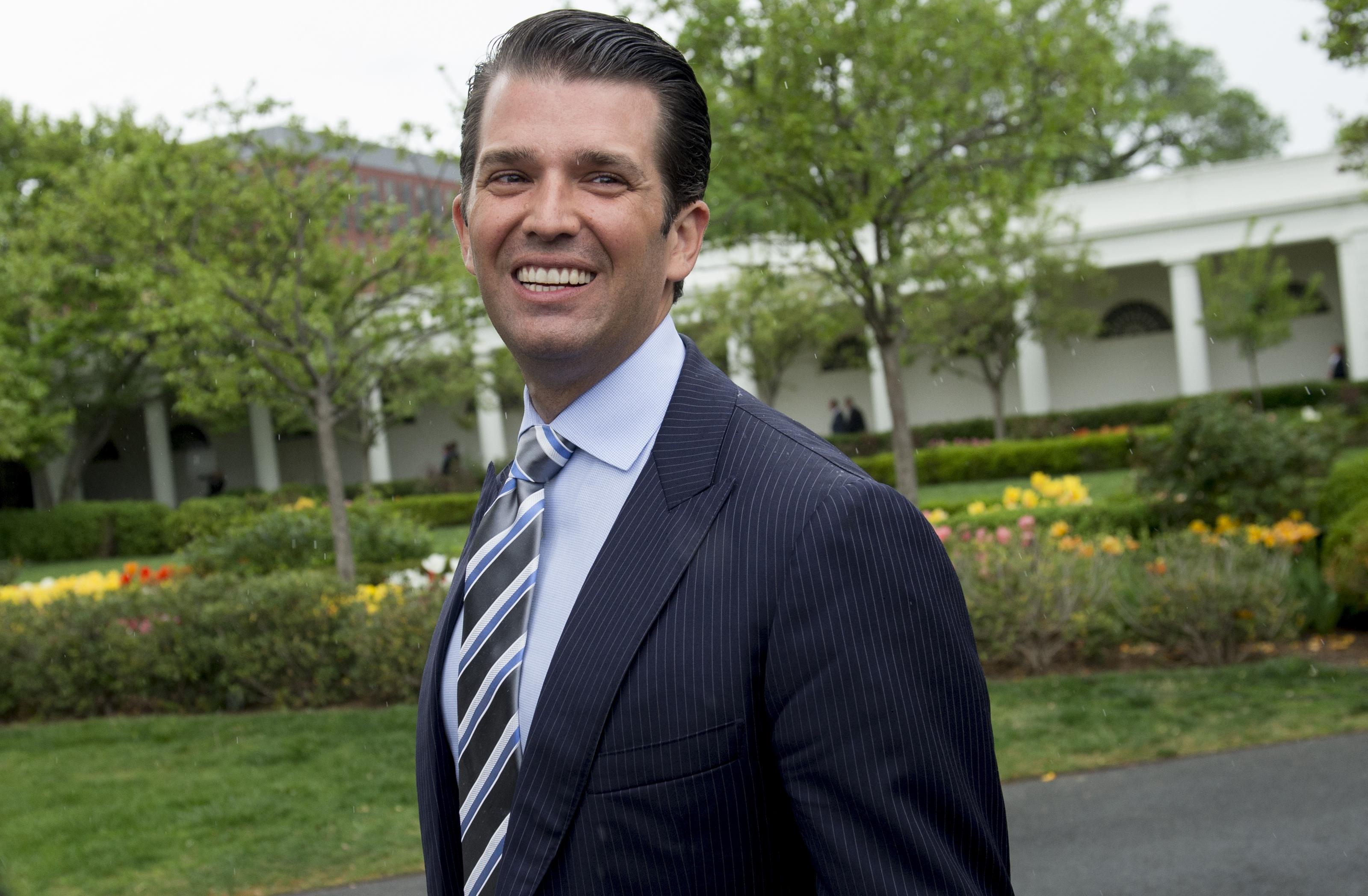 A Russian-American lobbyist says he attended a June 2016 meeting with President Trump's son, marking another shift in the account of a discussion that was billed as part of a Russian government effort to help the Republican's White House campaign.

Rinat Akhmetshin confirmed his participation to The Associated Press on Friday. Akhmetshin has been reported to have ties to Russian intelligence agencies, though he denies ever working as an intelligence agent. He told the AP that he served in the Soviet military in a unit that was part of counterintelligence but was never formally trained as a spy.

Akhmetshin said in the meeting, the Russian lawyer, Natalia Veselnitskaya, presented the Trump associates with details of what she believed were illicit funds that had been funneled to the Democratic National Committee. And she suggested that making the information public could help the Trump campaign.

"This could be a good issue to expose how the DNC is accepting bad money," Akhmetshin recalled her saying.

The meeting has heightened questions about whether Mr. Trump's campaign coordinated with the Russian government during the election, which is the focus of federal and congressional investigations. In emails posted by Donald Trump Jr. earlier this week, an associate who arranged the meeting said a Russian lawyer wanted to pass on negative information about Democrat Hillary Clinton and stated that the discussion was part of a Russian government effort to help the GOP candidate. "If it's what you say I love it," Trump Jr. responded.

While Trump Jr. has confirmed that Russian attorney Natalia Veselnitskaya was in the meeting, he did not disclose Akhmetshin's presence. The president's son has tried to discount the meeting, saying that he did not receive the information he was promised. Akhmetshin is a registered lobbyist for HRAGI, the supposed non-government entity that Veselnitskaya was representing.

According to Akhmetshin, Trump Jr. asked the attorney if she had all the evidence to back up her claims, but Veselnitskaya said the Trump campaign would need to research it more. After that, Trump Jr. lost interest.

"They couldn't wait for the meeting to end," he said.

Asked about Akhmetshin's participation in the meeting, Manafort spokesman Jason Maloni declined comment. A spokesman for Kushner did not respond to inquiries, nor did Trump Jr.'s attorney.

Akhmetshin said the attorney brought with her a plastic folder with printed-out documents. He said he was unaware of the content of the documents or whether they were provided by the Russian government, and it was unclear whether she left the materials with the Trump associates.

Akhmetshin said the meeting was "not substantive," and he "actually expected more serious" discussion.

"I never thought this would be such a big deal to be honest," he told the AP.

The Russian government has denied any involvement or knowledge of the June 2016 meeting. Asked Friday about Akhmetshin, Russian President Vladimir Putin's spokesman, Dmitry Peskov, told reporters: "We don't know anything about this person."

In reports this week, Akhmetshin has been identified as a former Russian counterintelligence officer, but he denied ever serving in such a capacity.

"That is not correct," Akhmetshin said. He said he served in the Soviet Army from 1986 to 1988 after he was drafted but was not trained in spy tradecraft.

Akhmetshin said he has not been contacted by the special counsel's office or the FBI about the meeting with Trump Jr. He said he's willing to talk with the Senate Judiciary Committee, whose chairman, Iowa Sen. Chuck Grassley, has pressed the Justice Department about why Akhmetshin has not registered as a foreign agent.

Grassley said in a March letter that Akhmetshin has "reportedly admitted to being a 'Soviet counterintelligence officer' and has a long history of lobbying the U.S. government for pro-Russia matters."

Akhmetshin said that the Justice Department's Foreign Agents Registration Act unit sent him a letter in April and told him, "it has come to our attention you should have filed for FARA." He said he didn't believe he needed to file as a foreign agent. He has previously registered with Congress for the lobbying work, and he plans to raise this issue before Grassley's committee.

"I think I have a legal right to tell my story," he said.

Separately on Friday, the data and digital director for Trump's presidential campaign said he will speak with the House Intelligence Committee later this month as part of its own Russia probe.

Brad Parscale said in a statement that he is "unaware of any Russian involvement" in the data and digital operations but will voluntarily appear before the panel and looks forward to "sharing with them everything I know."

The political cloud surrounding Russia continues to plague the Trump campaign, even as the president visited Paris.

"I do think this: I think from a practical standpoint, most people would've taken that meeting," the president said in a joint press conference with French President Emmanuel Macron in Paris. "It's called opposition research," Mr. Trump added, calling the setting up of a meeting to get compromising information "standard" practice.

"Politics is not the nicest business in the world, but it's very standard where they have information, and you take the information," the president added.

South Carolina Republican Rep. Trey Gowdy, chairman of the House Oversight Committee, said everyone in the Trump administration should go through every document to find any interactions with Russian officials to "get it all out," instead of allowing the Russia saga to develop piece by piece.