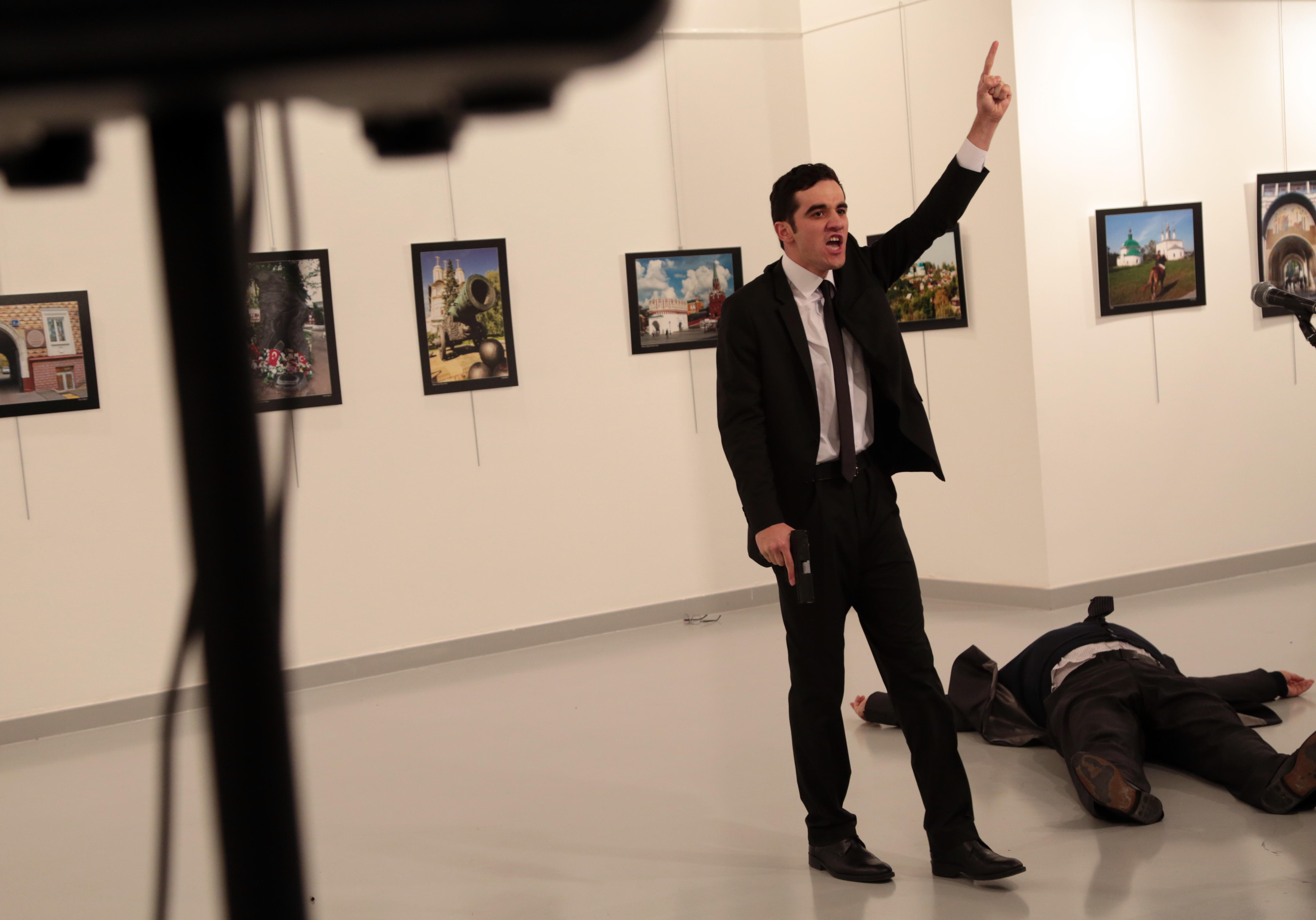 ANKARA - Russia’s ambassador to Turkey was shot by a Turkish police officer shouting about Syria’s civil war in the capital of Ankara on Monday, according to witnesses and officials.

Turkish police officers responding to the incident fatally shot the gunman, who was identified by officials as Mevlut Mert Altintas, aged 22. Turkish officials confirmed earlier reports that Altintas was himself a police officer, working riot detail in Ankara.

The leaders of Turkey and Russia said Karlov’s killing has been intended to ruin Russia-Turkey ties. Speaking in televised remarks during a meeting with senior officials, Russian President Vladimir Putin called it a “provocation aimed at derailing Russia-Turkey ties and the peace process in Syria.”

“We must know who was directing the killer,” Putin said in televised remarks. He ordered top officials to strengthen protection of the Turkish Embassy in Moscow and asked Turkey to increase security at the Russian mission in Ankara.

Turkish President Recep Tayyip Erdogan, in a video message being shown on several Turkish TV channels, said that “this is a provocation to damage the normalization process of Turkish-Russian relations. But both the Russian and Turkish administrations have the determination not to fall for this provocation.”

Both leaders said Russian investigators will be part of the official probe into Karlov’s assassination.

President-elect Donald Trump vowed Monday that the Islamic State of Iraq and Syria (ISIS) and other “Islamist terrorists” would be “eradicated from the face of the earth” following both the killing of the ambassador and a violent incident in Berlin.

He first released a statement on Karlov’s assassination, calling the shooting -- which also wounded three people --  a “violation of all rules of civilized order.” He said the ambassador was assassinated by a radical Islamic terrorist.

“The murder of an ambassador is a violation of all rules of civilized order and must be universally condemned,” Mr. Trump said in a written statement, issued as he conducted transition meetings at his Palm Beach, Florida, estate.

He later tweeted about the assassination and two other incidents that unfolded on Monday, in Germany and Switzerland. A truck plowed through a crowd at a Christmas market in Berlin, killing nine, and a gunman injured three people at a mosque in Zurich.

Mr. Trump called all three “terror attacks” and said “it is only getting worse.”

“The civilized world must change thinking!” he tweeted.

Authorities, however, weren’t considering the Zurich attack to be terrorism, Zurich police spokesman Marco Bisa said. Police also said it was too early to determine whether there might be any link to between the Zurich and Berlin incidents.

German authorities were still investigating the Berlin event. The White House said it “appears to have been a terrorist attack.”

Trump said ISIS “and other Islamist terrorists continually slaughter Christians in their communities and places of worship as part of their global jihad.” He added that they must be “eradicated from the face of the earth” and pledged to carry out that mission with the United States’ “freedom-loving partners.”

U.S. Secretary of State John Kerry called the killing of the Russian ambassador to Turkey a “despicable attack,” and said the U.S. is ready to offer help to Russia and Turkey in the investigation. Kerry said the killing was “an assault on the right of all diplomats to safely and securely advance and represent their nations around the world.”

U.N. Secretary-General Ban Ki-moon condemned what he called a “senseless act of terror,” for which “there can be no justification.”

The ambassador was several minutes into a speech at an embassy-sponsored photo exhibition in the capital, Ankara, when Aydintas, wearing a suit and tie, shouted “Allahu Akbar” and fired at least eight shots, according to an AP photographer in the audience. The attacker also said some words in Russian and smashed several of the photos hung for the exhibition.

“Don’t forget Aleppo, don’t forget Syria!” Aydintas shouted in Turkish, referring to the Syrian city where Russian bombardments have helped drive rebels from areas they had occupied for years during the war.

He also shouted “Allahu akbar,” the Arabic phrase for “God is great” and continued in Arabic: “We are the descendants of those who supported the Prophet Muhammad, for jihad.”

The gunman approached Karlov as he lay on the ground and shot him at least one more time at close range, according to the AP photographer. The attacker also smashed several of the framed photos hung for the exhibition. There was panic as people ran for cover. Three other people were wounded in the attack, NTV said.

The attack comes a day before a meeting of Russian, Turkish and Iranian foreign and defense ministers in Moscow to discuss Syria. Russia and Iran have backed Syrian President Bashar Assad throughout the nearly six-year conflict, while Turkey has supported Assad’s foes.

Senior Russian lawmakers are describing the killing of Karlov as a provocation aimed to derail a rapprochement between the two nations.

The U.N. Security Council also condemned “in the strongest terms” the “terrorist attack,” and is calling for the perpetrators, organizers and sponsors to be brought to justice.

A statement Monday night from the U.N.’s most powerful body reaffirms that all forms of terrorism pose one of the most serious threats to international peace and security. It says “that any acts of terrorism are criminal and unjustifiable, regardless of their motivation, wherever, whenever and by whomsoever committed.”

The council also expresses “deep condolences” to the family of Ambassador Karlov and the Russian government.

The council further stresses “the fundamental principle of the inviolability” of diplomats under the 1961 Vienna convention on diplomatic relations and reaffirms the need to combat threats to international peace and security caused by terrorist acts.

Leonid Slutsky, the head of the foreign affairs committee at the lower house of Russian parliament, said that unspecified opponents of Russia “are making desperate attempts to spoil ties between Russia and Turkey, but those attempts will fail.”

He and other senior lawmakers called for even closer cooperation with Turkey and refrained from advising Russians to avoid visiting Turkey.

Karlov was shot “when an unidentified assailant opened chaotic gunfire during a public event in Ankara,” Russian Foreign Ministry spokeswoman Maria Zakharova said. She said Russia was in contact with Turkish officials about the incident.

Russia and Turkey recently negotiated a cease-fire in the Syrian civil war between rebels and the Assad regime fighting over the city of Aleppo. The cease-fire has led to the negotiated surrender of rebels that had held the city since nearly the beginning of the five-year-old conflict.

Earlier this year, there was a diplomatic crisis between the two nations after Turkey shot down a Russian jet Ankara said had violated their airspace during maneuvers over Syria.

Turkey has also struggled with a series of deadly terrorist attacks recently, from both Kurdish rebels and groups like ISIS.

According to the Ministry of Foreign Affairs, Karlov began his diplomatic career in 1976, and has previously served in North Korea. He became Russian Ambassador to Turkey in July of 2013.

“It’s a tragic day in the history of our country and Russian diplomacy,” Russian Foreign Ministry spokeswoman Maria Zakharova said.

“Ambassador Karlov has made a lot of personal contributions to the development of ties with Turkey. He has done a lot to overcome a crisis in bilateral relations,” she said. “He was a man who put his heart and his soul into his job. It’s a terrible loss for us and also the world.”