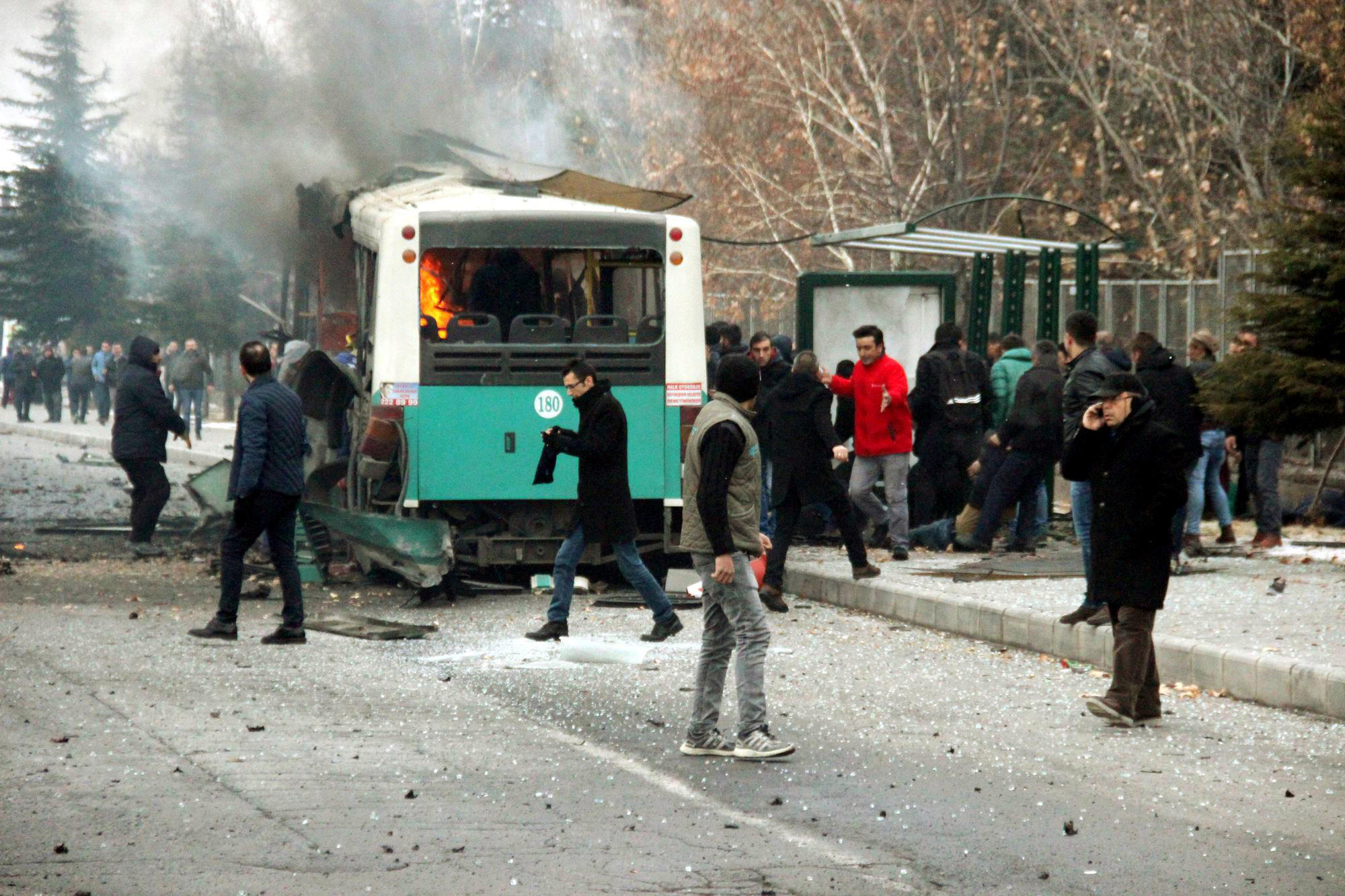 ISTANBUL -- A suicide car bomb targeting military personnel exploded at the entrance gate to a university in the central province of Kayseri on Saturday, killing 13 Turkish troops and wounding at least 55 other people, authorities said.

The blast comes a week after a car bomb attack claimed by Kurdish militants killed 44 people, mainly riot police posted outside a soccer stadium in Istanbul.

The army said 48 troops were wounded among the wounded in Saturday’s “treacherous attack.” The state-run Anadolu Agency said the explosion was at the entrance gate of Erciyes University, hitting a public transportation bus that included soldiers among its passengers.

Earlier, Soylu, speaking in Kayseri, said six of the wounded were in critical condition. Images taken moments after the explosion showed a smoking public bus, still in flames, with its windows blown open and its interior blackened.

There was no immediate claim of responsibility but the statements of top officials suggested suspicion was focused on the outlawed Kurdistan Workers’ Party, or PKK, which Ankara and the West consider a terrorist organization.

Kurdish militants have claimed multiple attacks against soldiers and police across Turkey this year in violence that has also caused casualties among civilians.

The Turkish state has fought the PKK for decades in a conflict that has claimed tens of thousands of lives. The collapse of a two-and-a-half year cease-fire in July 2015 set the stage for a violent new chapter and ushered vast security operations in the predominantly Kurdish southeast.

Turkey is also at odds with Western-backed Kurdish factions fighting against the Islamic State of Iraq and Syria, or ISIS, in neighboring Syria and Iraq. Turkey views these groups as extensions of the PKK.

“We know that these attacks we have endured are not unrelated to happenings in Syria and Iraq, or even our economical fluctuations,” Erdogan said.

A state of emergency was declared following a botched July 15 coup attempt, and remains in force.

Turkey’s prime ministry office imposed a temporary blackout on coverage of the explosion and urged media to refrain from publishing anything that may cause “fear in the public, panic and disorder and which may serve the aims of terrorist organizations.”