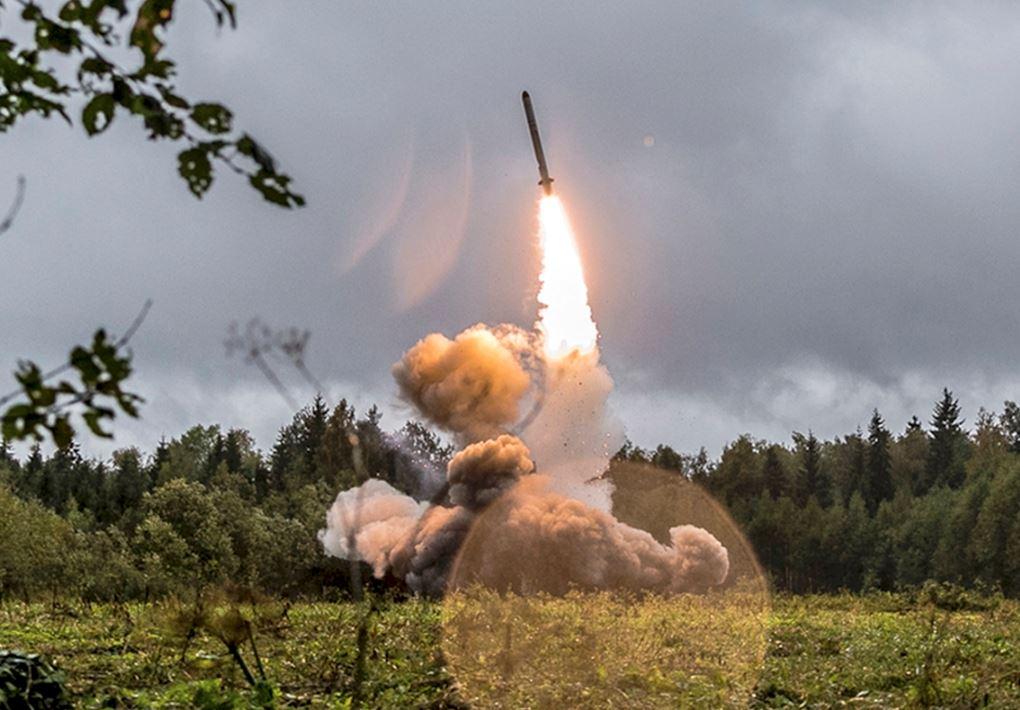 MOSCOW -- Russian officials on Wednesday warned of "retaliation" to the U.S. decision to walk out of a key arms treaty U.S. Secretary of State Mike Pompeo announced at a NATO meeting Tuesday that Washington will suspend its obligations under the 1987 Intermediate-Range Nuclear Forces Treaty (INF) in 60 days, citing Russian "cheating."

President Vladimir Putin said if the U.S. started developing new intermediate range missiles, his country would respond in kind to build it's own new weapons. That, however, is exactly what the Trump administration argues Russia has already done, in violation of the treaty.

The U.S. has shared intelligence evidence with its NATO allies that it says shows that Russia's new SSC-8 ground-fired cruise missile (also known as the Novator 9M729) could give Moscow the ability to launch a nuclear strike in Europe with little or no notice. The bilateral INF treaty between Washington and Moscow banned all land-based cruise and ballistic missiles with a range between 310 and 3,410 miles. Russia says the range of the new system does not exceed 310 miles.

Early in 2017 U.S. officials told CBS News national security correspondent David Martin that they had monitored Russian flight tests in which the SSC-8 flew in excess of 300 miles. Those tests were conducted secretly near the end of the Obama administration, but it was left up to the Trump White House to decide how to respond. U.S. officials told Martin the deployment of the SSC-8 units was such a blatant violation of the INF treaty that it called into question the value of any future arms control treaties with Russia.

The U.S. began researching in 2017 the development of new intermediate range missiles in response to Russia's treaty violations. Such research in and of itself is not a violation of the treaty, as long as any such new weapons are not developed or deployed.

Putin, speaking on Wednesday, reiterated his stance that it was the U.S. unilaterally giving up on the treaty and claiming, "they show no proof of violations on our side." He also pointed to the U.S. decision to research new weapons that would violate the INF agreement.

He said Russia's response would be, "simple; we will also do it (develop intermediate-range nuclear and conventional missiles). I remind you that this year the U.S. Congress -- before the intention to exit the treaty was announced -- has allocated money for research and development of those missiles."

"It was done quietly, they thought we won't notice it," said Putin. "But the development of these missiles is already in the Pentagon budget. And they have publicly announced the exit (from the treaty) only afterwards."

"We are against destruction of the treaty," Putin added. "But if it happens, we will react accordingly."

NATO has backed up the Trump administration's argument, agreeing that Russia is in violation of the treaty while Washington continues to adhere to it.

The European Union has urged both the United States and Russia to uphold the INF treaty, saying the pact is one of the cornerstones of European security. But in October, NATO chief Jens Stoltenberg stopped short of calling on Washington, the biggest and most influential NATO member, to stay in the treaty.

"The INF is a landmark treaty but the problem is that no treaty can be effective, can work, if it's only respected by one part," Stoltenberg told reporters in Brussels, noting that the "U.S. is in full compliance."

Stoltenberg said that based on U.S. estimates and Russia's reluctance to discuss the missile system with NATO, "the most plausible explanation is that Russia is in violation of the treaty."

Pompeo said Washington "would welcome a Russian change of heart" but that he has seen no indication that Moscow is likely to comply.

Gen. Valery Gerasimov, chief of staff of the Russian military, told a briefing of foreign military attaches on Wednesday that if the U.S. "were to destroy" the treaty "we will not leave it without a response."

He did not give specifics, but he told the attaches that it would be the countries that host U.S. intermediate-range missiles that would become immediate targets for Russia.

Russia has already received official notification from the United States that it intends to walk out of the INF, Foreign Ministry spokeswoman Maria Zakharova told reporters on Wednesday.

Zakharova insisted that Russia has always respected the treaty and considers it "one of the key pillars of strategic stability and international security."

Russia's war in Ukraine: How it came to this