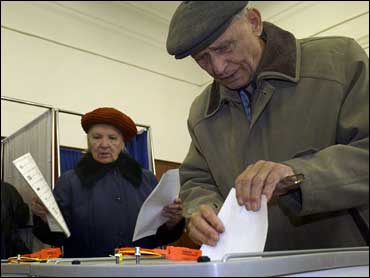 Russians voted Sunday in a parliamentary election where the only question is whether President Vladimir Putin's party will win merely a strong majority of seats or a crushing share.

The election follows months of increasingly acidic rhetoric against the West and efforts — by law and by truncheon — to stifle opponents.

A huge win for Putin's United Russia party could pave the way for him to stay at the country's helm once his presidential term expires in the spring. The party casts the election as essentially a referendum on Putin's nearly eight years in office. Many of its campaign banners that festoon the capital read "Moscow is voting for Putin."

Putin is constitutionally prohibited from running for a third consecutive term as president in March. But he clearly wants to keep his hand on the helm in Russia, and has raised the prospect of becoming prime minister; many supporters have suggested his becoming a "national leader," though what duties and powers that would entail are unclear.

He has said that a strong showing for the party Sunday would give him the moral right to ensure that politicians continue his policies. Recent opinion polls suggest the party could win up to 80 percent of seats.

The dominance of United Russia provoked a fatalistic attitude in some voters.

"I think the result was pretty much planned in advance. I don't know who I'll vote for; I'll decide when I get to the booth," said Ivan Kudrashov, in his 20s, as he entered Moscow's Christ the Savior Cathedral for Sunday Mass.

The vote is the first national ballot under new election laws that have been widely criticized as marginalizing opposition forces. All the seats will be awarded proportionately to how much of the vote a party receives; in previous elections, half the seats were chosen among candidates contesting a specific district, which allowed a few mavericks to get in.

The new laws also say a party must receive at least 7 percent of the national vote to get any seats — up from the previous 5 percent. A poll by the All-Russia Public Opinion Research Center in mid-November showed the Communists and two other parties hovering near the cutoff point.

Opposition parties, meanwhile, claim authorities have confiscated campaign materials and that the managers of halls have refused to rent them out for opposition meetings. Police have violently broken up opposition rallies — most recently in Moscow and St. Petersburg last weekend — and national television gives the parties hardly any coverage.

Garry Kasparov, the former world chess champion who has become one of the most prominent opposition leaders, called the election a "farce" Friday, a day after being released from jail following his arrest in the weekend protests.

In contrast to the near invisibility of the opposition on television, Putin's speeches to supporters have been broadcast in full and repeated throughout evening newscasts.

Sunday's vote "meets none of the criteria of a free, fair and democratic election. In effect, it is not even an election," Andrei Illarionov, a former adviser to Putin, wrote in a commentary for the Cato Institute think-tank.

Under Putin, once-struggling Russia has become inundated with oil revenue, a nascent middle-class is developing and the war against separatists in Chechnya has faded into sporadic, small clashes. Russia's newly assertive military policy and inclination to taunt and criticize the West appeals strongly to Russians who suffered physically and emotionally in the early post-Soviet years.

"We believe in Putin and we love Putin dearly," said Tamara Posekhova, a 60ish Mass-goer at the Moscow cathedral. "We want him to go on working for the country."

But with the competition stifled and the election result seen as a foregone conclusion, many of the 107 million eligible to vote could find apathy and inertia weakening any desire to brave winter weather to cast ballots.

Authorities throughout Russia's 11 time zones appeared determined to ensure a sizable turnout, through pressure, persuasion and even presents. In Novorossiisk, voters had a chance to win a car, laptop computers and cellular phones, the ITAR-Tass news agency reported. Another region promised new housing will be built in whichever village shows the most "mature" turnout.

Teachers, doctors and other workers have complained that their bosses are ordering them to vote — usually with the implication that they should vote for United Russia.

With Russia showing an increasingly assertive military policy and with foreign hunger growing for Russia's oil, gas and minerals, the election is of strong interest overseas. But international organizations are not able to watch as closely as they had hoped.

The elections-monitoring arm of the Organization for Security and Cooperation in Europe, regarded in the West as the most authoritative assessor of whether an election is fair, canceled plans to send observers. It said Russia had delayed granting visas for so long that the organization would be unable to conduct a meaningful assessment of election preparations.

Russia has criticized monitoring by the OSCE elsewhere in the former Soviet Union as supporting protests that forced leadership changes, but it denied that it was impeding operations in Russia. Putin claimed the pullout was initiated by the United States in an effort to discredit the elections and his government.

A total of about 300 observers from various international organizations were scheduled to monitor the voting.

Disdain for the West has been one of the dominating themes of the election. Putin called his opponents "foreign-fed jackals" last month and warned that Russia will not tolerate meddling from abroad.