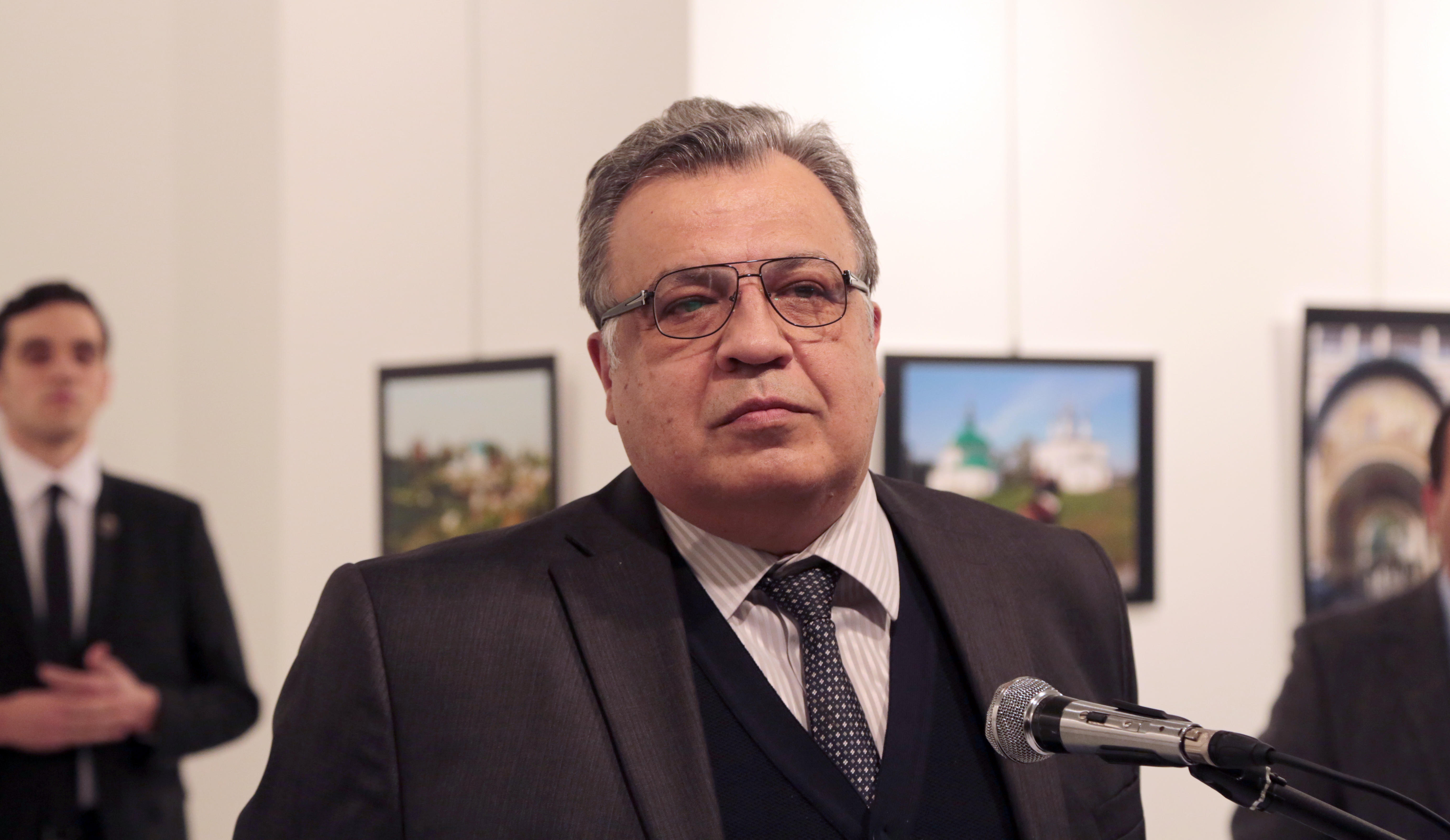 ANKARA, Turkey - In the immediate aftermath of the assassination of Russian Ambassador to Turkey Andrey Karlov, both Moscow and Ankara were quick to paint the attack as an attempt to disrupt their often-rocky relationship, especially as they enter delicate negotiations over the crisis in Syria.

On Tuesday, a senior Turkish government official told the Associated Press that Mevlut Mert Altintas, the policeman who shot Karlov, was unlikely to have acted alone.

President-elect Donald Trump has also dismissed the assassination as a simple act of terrorism, even though investigators from both Russia and Turkey are still out hunting for clues as to who else might have been behind the killing.

CBS News correspondent Holly Williams reports that so far, on the face of it, it looks like an act of retribution for Russia’s bloody air campaign in Syria.

“Remember Aleppo! Remember Syria!” the assassin shouted after shooting Karlov in the back.

Russia and Turkey are on opposite sides in the Syrian civil war but recently relations have improved. The two countries negotiated a ceasefire last week to help evacuate Syrian civilians.

But this comes just days after thousands in Turkey protested against Russian airstrikes in Syria. Like many in the Middle East, they’re furious at Russia’s lethal support for the Syrian regime.

Russian investigators on Tuesday inspected the art gallery in the Turkish capital of Ankara where Karlov was shot dead Monday evening by Altintas, the 22-year-old gunman who was a member of Ankara’s riot police squad.

The senior Turkish government official described the killing as “fully professional, not a one-man action” and said the attack was well-planned. The official spoke on condition of anonymity to The Associated Press because he was not authorized to release details to the press.

Turkish authorities have not publicly released any information on the investigation or on a possible motive for the policeman.

Still, Turkish police have detained seven people in connection with the gunman: his parents, sister, three other relatives and his roommate in Ankara, Turkey’s state-run Anadolu news agency reported.

According to the news agency, Altintas took leave from work and on Dec. 14 made a hotel reservation near the art exhibition center. He arrived at the hotel on Monday. Police searched his hotel room, which was later sealed.

Karlov’s body was flown home to Moscow on Tuesday afternoon after an emotional ceremony at Ankara Airport attended by Turkish government officials and diplomats. Karlov’s wife, Marina Karlova, wept as her husband’s flag-draped coffin was carried by a Turkish honor guard. She laid two red carnations on the coffin before it was loaded onto the aircraft.

Turkey and Russia, which have backed opposing sides in the Syrian war, vowed not to let the killing disrupt efforts to repair their ties.

“Strong relations will continue, no one has the strength to destroy the relationship” between the two countries, Turkish Prime Minister Binali Yildirim said during a speech in Istanbul for the opening of a tunnel highway under the Bosporus. “We will continue to carry out every kind of effort to overcome the instability in the region.”

Turkish President Recep Tayyip Erdogan said he and Russian President Vladimir Putin, with whom he spoke by phone Monday night, were “in agreement that this was an open provocation.”

A joint investigation was being conducted into the ambassador’s death, he said. “Together with Mr. Putin, we have an understanding that our cooperation, especially in Syria, will not be affected by this attack.”

Karlov’s assassination came after days of protests by Turks angry over Moscow’s support for Syrian President Bashar Assad and Russia’s role in the bombardment and destruction of rebel parts of Aleppo.

“Don’t forget Aleppo! Don’t forget Syria!” Altintas shouted during the attack, shooting Karlov as he delivered a speech at a photo exhibition in the Turkish capital. The attacker was later killed by police in a different part of the building.

Turkish Foreign Minister Mevlut Cavusoglu, speaking at a previously scheduled meeting on Syria in Moscow with Russian Foreign Minister Sergey Lavrov and their Iranian counterpart, said Turkey and Russia would work together to determine who was behind the “heinous terror attack.”

“Turkey and Russia have shown the world what they can achieve when they cooperate,” Cavusoglu said, referring to the cease-fire deal that paved the way for the evacuation of thousands of people from east Aleppo.

Both foreign ministers lay flowers in front of a photograph of the ambassador at the Russian Foreign Ministry mansion where talks were taking place. Cavusoglu said a street where the Russian Embassy in Ankara is located would be renamed for Karlov.

On Monday evening, an Associated Press photographer and others at the art gallery watched in horror as Altintas, who was wearing a dark suit and tie, fired at least eight shots, at one point walking around the ambassador as he lay motionless and shooting him again at close range.

Also Tuesday, Turkish police detained a man who fired a shotgun in front of the U.S. Embassy, which is across the street from the building where the Russian ambassador was killed. It was not immediately known if the two incidents were connected. No one was hurt.

The man fired around eight shots in the air before embassy security guards apparently overpowered him, Anadolu said.

The U.S. Embassy said its missions in Ankara, Istanbul and the southern city of Adana were closed Tuesday. Authorities increased security outside the Russian Embassy, and the Iranian Embassy was closed Tuesday as a precaution.

Russia warned citizens against traveling to Turkey, citing attacks that have hit the country over the past 18 months.