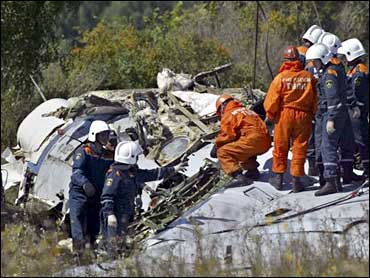 A top Russian official said Thursday that flight recorders failed to provide reliable information about what brought down two jetliners just minutes apart, but for the first time a government leader conceded that terrorism was considered the leading possibility.

A day after officials spoke cautiously about terrorism and stressed that other causes were being considered, presidential envoy Vladimir Yakovlev said that despite the lack of data, the main theory about the catastrophe "all the same remains terrorism," the ITAR-Tass news agency said.

The apparent failure of the recorders to provide significant information was sure to fuel what appeared to be rising suspicion among Russians over the crashes that killed 89 people, a view embodied by a headline in the Nezavisimaya Gazeta proclaiming "Russia now has a Sept. 11."

"There are too many coincidences," said a Moscow pensioner, Ruven Suryaninov. Physicist Natalia Kozhelupova said, "It's too suspicious."

Many Russians have ingrained doubts about the government's candor after the confused and contradictory reports on the sinking of the nuclear submarine Kursk in 2000 and the still-murky 2002 seizure of a Moscow theater by Chechen rebels.

Suspicions about terrorism in the crashes were bolstered by the fact they came just five days before a Kremlin-called election in warring Chechnya, whose separatist rebels have been blamed in a series of suicide bombings and other attacks in recent years. Officials previously expressed concern that militants might try to carry out attacks ahead of Sunday's vote.

Officials said Wednesday that while terrorism was a possibility, other factors such as bad jet fuel or human error also were being investigated and they hoped the planes' data recorders would yield clues.

But Yakovlev, the presidential envoy for southern Russia, where one of the jetliners crashed, told First Channel television that the recorders "turned off immediately ... this is probably the main affirmation that something happened very fast."

He said the recorders "had gone out of service already before the fall of the airliners," ITAR-Tass said.

Analysts were divided over whether the government has been trying to play down the possibility of terrorism.

Pavel Felgenhauer, an independent military analyst who is often critical of Russian authorities, said the government would have nothing to gain in a cover-up.

"From all viewpoints it would be better for the authorities to call it a terrorist act ... because otherwise it means that things are really bad here, that we have bad planes that crash to the ground one after another," he said.

But Oleg Panteleyev, an independent aviation expert, speculated the authorities were trying to avoid another form of embarrassment. "For the special services, to miss such a major terrorist act would be to acknowledge their impotence," he said.

A government commission appointed to investigate traveled Thursday to the crash site about 120 miles south of Moscow, where a Tu-134 with 43 people aboard went down. Workers ended their search work there, but continued to comb the wreckage of a Tu-154 that crashed in southern Russia, killing 46 passengers and crew.

Despite the lack of an official conclusion on the causes, the crashes raised serious concerns about security at Russian airports. President Vladimir Putin on Wednesday ordered the government to draft legislation to turn over responsibility for airport security to the Interior Ministry, which runs both the police and paramilitary forces, according to news reports.

Putin also designated Thursday as a national day of mourning.

Both had taken off from the single terminal at Moscow's newly renovated Domodedovo airport, the Sibir airline Tu-154 around 9:35 p.m. and the smaller Tu-134 about 40 minutes later.

Sibir said it was notified its jet had activated an emergency signal shortly before disappearing from radar screens. Officials said there were no indications of trouble with the other plane, but witnesses on the ground reported hearing a series of explosions.

Domodedovo airport said in a statement that both planes "went through the standard procedure of preparation for flight" and "the procedures were carried out properly."

But there was skepticism that technical failure or human error could bring down two planes at almost the same time hundreds of miles apart. "That's pretty far out there on the chance bar," said Bob Francis, former vice chairman of the U.S. National Transportation Safety Board.

Jim Burin of the U.S.-based Flight Safety Foundation said that although bad fuel could cause an airplane's engines to fail, the problems likely would be noticed and reported by the crew well in advance as the engines began to labor or misfire.

He added that initial reports from the crash scenes indicated that one plane's wreckage was spread out more widely than would usually be the case in a crash that was not preceded by an explosion.

"If it was only one accident, I would say a terrorist attack was possible. But two accidents? My God - it's hard to think of any other major likelihood of any reason," said expert Paul Duffy.

Chechen rebels and their supporters have made bold and brutal attacks both within the small southern republic and in Moscow — including the 2002 seizure of hundreds of hostages at a Moscow theater. Officials also blame Chechens for suicide bombings, including one outside a hotel near Red Square and another at an outdoor rock concert in the capital last year.

If authorities connect the crashes to Chechen rebels, it would likely make the Kremlin even more adamant in its refusal to negotiate with the insurgents to end the war. But it also would underline Russia's failure to defeat the rebels despite superior weaponry and manpower.