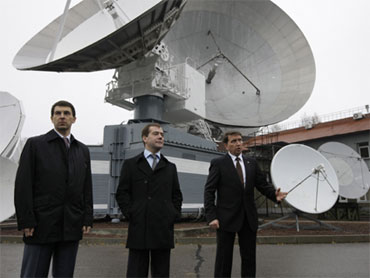 Russia laid out its ambition to gain an edge in the space race by building a nuclear-powered spaceship.

Federal Space Agency chief Anatoly Perminov told the meeting that the preliminary design could be ready by 2012. He said it would then take nine years and 17 billion rubles ($600 million) to build the ship.

At the meeting on new communications and space technologies, televised live, President Dmitry Medvedev hailed the plan and ordered the Cabinet to find the money for it. But the stated ambition contrasted with slow progress on building a replacement to the mainstay Russian spacecraft, sounding more like a plea for extra government cash than a detailed proposal.

"It's a very serious project," said Medvedev. "We need to find the money."

"It's one of a series of sucker-bait trial balloons looking for some government or corporation in the West with more dollars than sense," said James Oberg, an engineer in Houston who is an expert and consultant in the Russian space program.

Perminov said his plan was "a unique breakthrough project" that would put Russia ahead of foreign competitors in space. But he offered few details to make clear what the nuclear-powered ship's mission would be: whether it would be used near Earth like the existing Soyuz spacecraft, or for voyages into deep space.

Stanley Borowski, a senior engineer at NASA specializing in nuclear rocket engines, said that in deep space they are twice as fuel-efficient as conventional rocket fuel and would have many advantages on such missions as taking astronauts and gear to Mars.

But launched from Earth, they could expose crew and people near the blastoff site to potential radiation that would escape the confines of the rocket, he said.

"We never talk about using them for Earth-to-orbit launch," Borowski told The Associated Press. "The way they have always talked about it in NASA missions is for use in deep space."

Perminov said the ship will have a megawatt-class nuclear reactor, as opposed to reactors in Cold-War era Soviet satellites that produced just a few kilowatts of power and lasted about a year.

One of them, the derelict Cosmos-954 nuclear-powered satellite, scattered radioactive debris over northern Canada on its fiery re-entry in 1978, but caused no injuries in the lightly populated area.

"It's dangerous to put nuclear materials in space. They pose risks at re-entry."said Greenpeace's Vladimir Chuprov.

The U.N. outer space treaty, in force since 1967 and ratified by 105 countries including Russia and the U.S., was designed to keep outer space free of nuclear weapons. It makes no mention of using nuclear energy for nonmilitary purposes.

NASA also used small amounts of plutonium in deep space probes, including those to Jupiter, Saturn, Pluto and beyond.

Upcoming NASA missions powered by plutonium include the over-budget and delayed Mars Science Laboratory, set to launch in 2011, and a mission to tour the solar system's outer planets scheduled to go up in 2020.

The only planetary mission considered by Russia is a probe to one of Mars' twin moons, Phobos. It was set to launch this year, but was delayed.

The Russian space agency also has weighed missions to the moon and Mars but has set no specific time frame.

Perminov and other officials have previously said the Soyuz craft need a successor model for missions in Earth orbit, but so far have only talked about a ship powered by a conventional fuel.

Russia sends crews to the International Space Station using Soyuz capsules and booster rockets developed 40 years ago. Development of a replacement vessel using conventional propellant has dragged on with no end in sight.

But Russia stands to take a greater role in space exploration in the coming years. NASA's plan to retire its shuttle fleet next year will force the United States and other nations to rely on the Russian spacecraft to ferry their astronauts to the International Space Station and back to Earth until NASA's new manned ship becomes available.