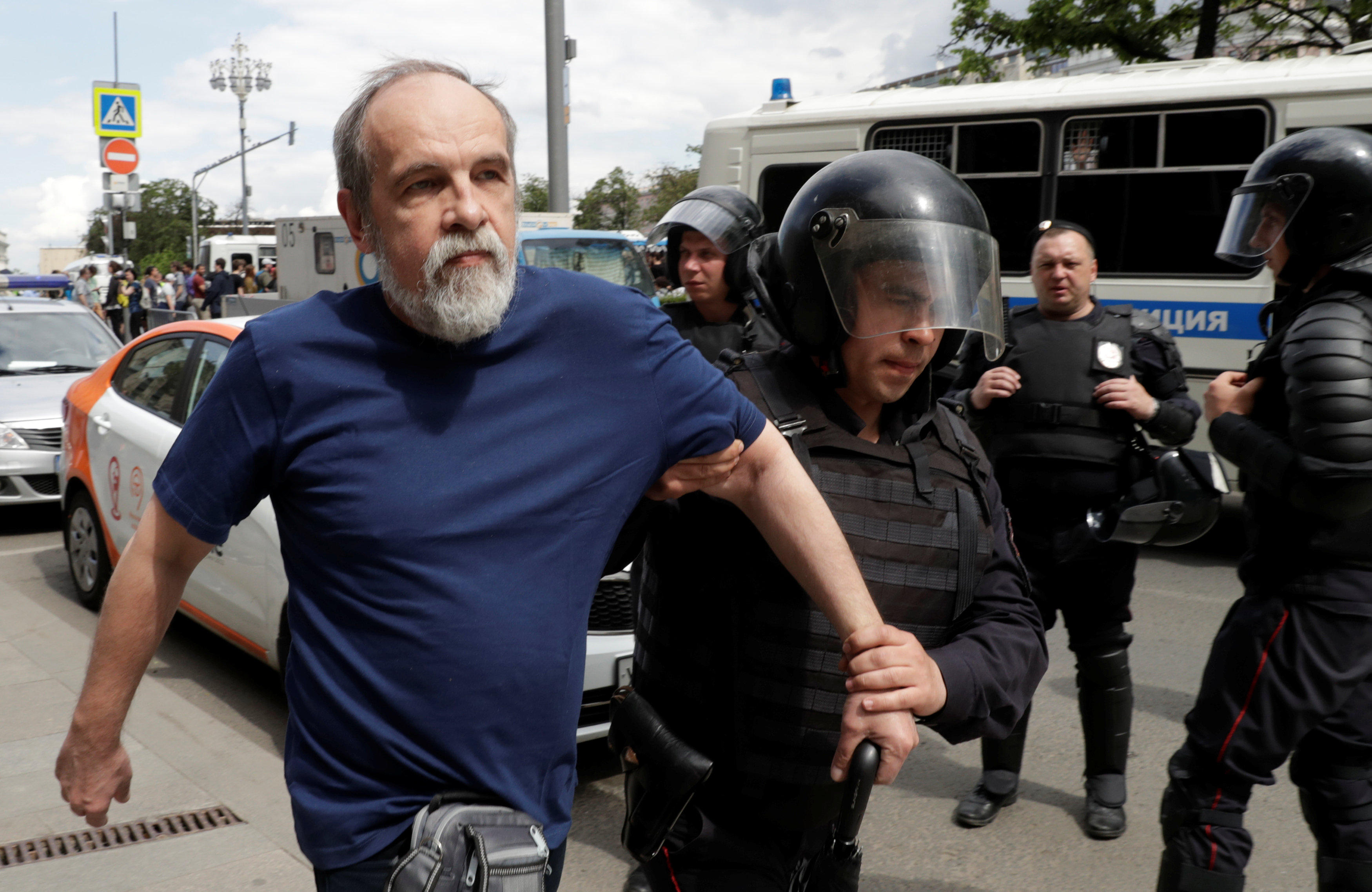 MOSCOW -- Russian police took up positions near the Kremlin on Monday, ready to break up a protest organized by the country's leading political opposition figure -- a man who hopes to challenge President Vladimir Putin's clutch on power in 2018 elections.

CBS News correspondent Elizabeth Plamer reported crowds of demonstrators were heading into central Moscow. Hours later, there were reports that hundreds of protesters had been detained across the country, including the ringleader himself.

After weeks of negotiating, Russian opposition leader Alexei Navalvy got permission to hold his Moscow rally in a downtown square, but less than a day before the protest he said no one would rent him sound and video equipment -- under pressure, he claimed, from the government to embarrass his movement -- so he changed the venue.

As Palmer reports, that meant his protest was no longer authorized by the government, and it all but guaranteed clashes with the police and another arrest for Navalny, who was detained at his last protest in March.

A message posted to Navalny's Twitter account on Monday confirmed that he was detained even before even leaving his apartment building.

Navalny's wife sent the tweet, saying her husband was detained in the apartment building staircase on his way out. She followed it moments later with another tweet, captioned "Happy Russia Day," with a photo of her husband being taken into custody by police.

Monday is Russia Day, a national holiday. Navalny's wife Yulia said her husband had asked her to pass on word to his followers prior to his arrest that the plans for the protest "remain the same: Tverskaya," a reference to the central Moscow street he chose just hours earlier as the protest venue.

In a statement reported by state news agency Tass, police said Navalny would be charged with failure to follow police orders and violation of public order, which could bring a 15 day prison sentence.

One of Navalny's aides said in a separate Twitter post that electricity and internet connectivity had been cut at their offices just prior to his arrest, ending a live web stream showing the gathering in Moscow.

He was only one of dozens of protesters taken into custody on Monday. Reports suggested dozens were detained in central Moscow and police in Russia's second-largest city detained scores of people who had gathered in a park in St. Petersburg's center for an unsanctioned opposition protest there.

An Associated Press reporter saw at least 500 protesters seized by police in the gathering at Mars Field.

After Navalny's change in venue, Moscow police had warned that "any provocative actions from the protesters' side will be considered a threat to public order and will be immediately suppressed."

The March protests took authorities across the country by surprise, given the huge turnout in cities across Russia. Thousands took to the streets -- mostly young people who support Navalny's anti-corruption message, but who are also angry about everything from unemployment to state control of the media. More than 1,000 protesters were arrested.

Navalny is a populist, explains Palmer, and a provocateur with a genius for publicity.

There are many people -- including inside his own movement -- who suspect the last-minute change of venue for Monday's protest is really a gambit to gain publicity and put more pressure on the Kremlin to let him run in the presidential election next year.

He has no chance winning the vote, but he would be the first serious opposition candidate to take on Putin -- if he is permitted to run. Russia's election commission can ban a candidate from running if they fail to garner a certain number of signatures backing their bid, or if some of the signatures are deemed fraudulent.

Navalny also has an outstanding conviction for alleged fraud from February this year (he insists the charge was politically motivated), and if he is formally sentenced for that conviction he would be disqualified from standing in a presidential election. He has continually appealed that ruling, however, and is expected to continue doing so to prevent it blocking his candidacy next year.

The protests in March took place in scores of cities across the country, the largest show of discontent in years and a challenge to Putin's dominance of the country.

The Kremlin has long sought to cast the opposition as a phenomenon of a privileged, Westernized urban elite out of touch with people in Russia's far-flung regions.

Monday's protests could demonstrate that the opposition has significant support throughout the vast country.

Navalny's website reported Monday that protests were held in more than a half-dozen cities in the Far East, including the major Pacific ports of Vladivostok and Khabarovsk and in Siberia's Barnaul. Photos on the website suggested turnouts of hundreds at the rallies.

Eleven demonstrators were arrested in Vladivostok, according to OVD-Info, a website that monitors political repressions.

Navalny has become the most prominent figure in an opposition that has been troubled by factional disputes. He focuses on corruption issues and has attracted a wide following through savvy use of internet video. His report on alleged corruption connected to Prime Minister Dmitry Medvedev was the focus of the March protests.

Navalny has announced his candidacy for the presidential election in 2018. He was jailed for 15 days after the March protests. In April, he suffered damage to one eye after an attacker doused his face with a green antiseptic liquid