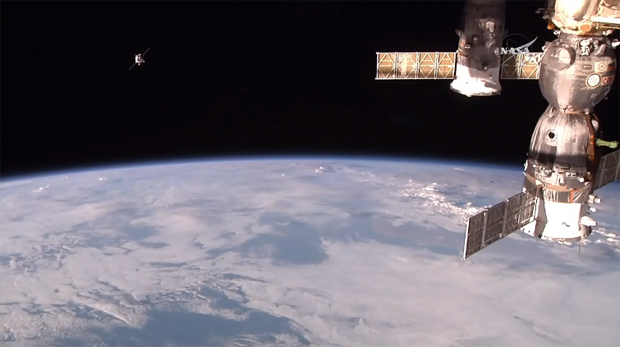 An automated Russian Progress supply ship docked at the International Space Station Thursday evening six hours after launch from Kazakhstan, bringing 3.1 tons of supplies and equipment to the outpost after a problem-free rendezvous.

"A flawless journey of six hours three minutes for the Progress 61 cargo craft," reported Rob Navias, NASA's mission control commentator. "All the pre-programmed engine firings to increase its altitude and to begin the journey to catch up to the International Space Station went by the book, with no issues whatsoever."

The mission began at 12:49:40 p.m. EDT (GMT-4; 10:49 p.m. local time) when the cargo ship's Soyuz booster roared to life and climbed away from the Baikonur Cosmodrome, two minutes after the space station passed overhead.

Lighting up the night sky, the rocket quickly arced away to the east, flying directly into the plane of the station's orbit to kick off a four-orbit rendezvous.

Just under nine minutes after liftoff, the Progress M-29M/61P spacecraft separated from the booster's upper stage and a few seconds after that, it's two solar panels and navigation antennas unfolded and locked in place as planned.

The spacecraft then executed a complex rendezvous procedure to catch up with the space station, lining up on the aft port of the station's Zvezda command module.

Cosmonauts Sergei Volkov and Oleg Kononenko were standing by at a work station inside Zvezda, ready to take over by remote control if necessary. But there were no problems, and the cargo craft moved in for docking as planned at 6:52 p.m. as the two spacecraft sailed 252 miles above the north Atlantic Ocean.

The M-29M/61P vehicle is a welcome addition to the station, bringing 6,373 pounds of equipment and supplies to the lab complex: 1,940 pounds of propellant, 926 pounds of water, 110 pounds of oxygen and 3,397 pounds of dry cargo, including spare parts, crew supplies and other gear.

NASA and its partners like to maintain a six-month reserve of critical supplies aboard the lab complex to protect against the possibility of a launch failure or some other mishap that might disrupt the supply train.

In a dramatic reversal of fortune, a Progress supply ship was lost in a launch failure last April followed by a SpaceX resupply mishap in June. Those back-to-back failures, along with the loss of an Orbital Science Cygnus cargo ship late last year, reduced the station's reserves to well under four months.

But NASA and Roscosmos, the Russian federal space agency, appear to be well on the road to recovery.

Since the SpaceX failure in June, the Russians successfully launched a Progress mission in July and Japan sent up its fifth HTV cargo ship in August. With the arrival of the M-29M/61P supply craft, another Progress scheduled for launch Nov. 21 and an Orbital Sciences Cygnus cargo ship set for launch Dec. 3, the station's reserves should be back to near-normal levels by the end of the year.

The next SpaceX station resupply mission is targeted for launch Jan. 3.