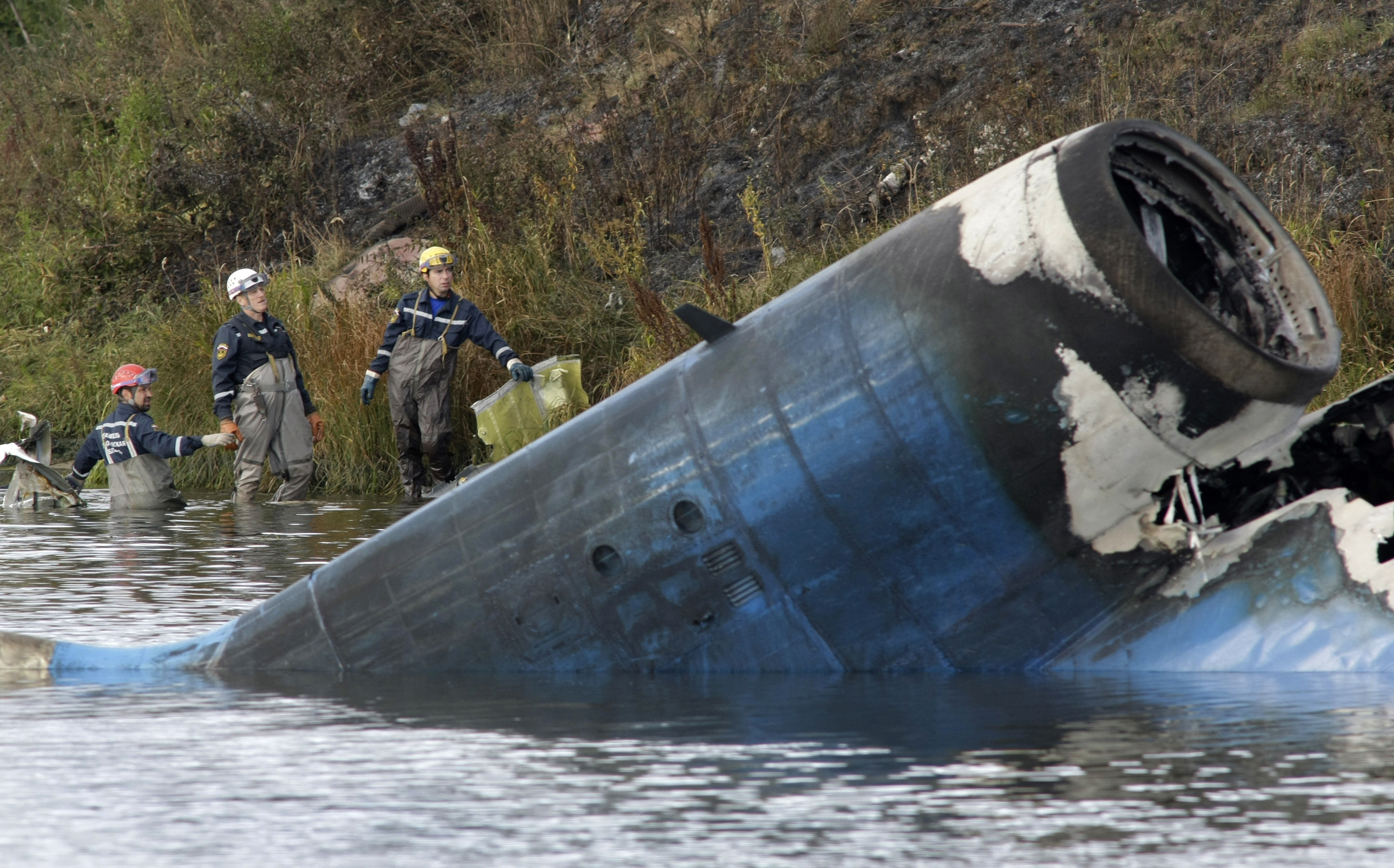 TUNOSHNA, Russia - A private Russian jet carrying a top ice hockey team slammed into a riverbank moments after takeoff Wednesday, killing at least 43 people in one of the worst plane crashes ever involving a sports team.

Both Russia and the world of hockey were left stunned by the deaths of so many international stars in one catastrophic event. Two other people on board were critically injured.

Team tragedies: A glance at plane crashes in the sports world

The Russian Emergency Situations Ministry said the Yak-42 plane crashed into the shores of the Volga River immediately after leaving the airport near the western city of Yaroslavl, 150 miles northeast of Moscow. The weather was sunny and clear at the time. Russian media said the plane struggled to gain altitude and then crashed into a signal tower, shattering into pieces.

Russian television showed a flaming fragment of the plane in the river as divers worked feverishly to recover bodies.

The plane was carrying the Lokomotiv ice hockey team from Yaroslavl to Minsk, the capital of Belarus, where the team was to play Thursday against Dinamo Minsk in the opening game of the season for the Kontinental Hockey League. The ministry said it had 45 people on board, including 37 passengers and eight crew.

"Though it occurred thousands of miles away from our home arenas, this tragedy represents a catastrophic loss to the hockey world — including the NHL family, which lost so many fathers, sons, teammates and friends who at one time excelled in our League," NHL Commissioner Gary Bettman said in a statement.

Officials said Russian player Alexander Galimov survived the crash along with a crewmember.

"Their state of health is very grave. But there is still some hope," said Alexander Degyatryov, chief doctor at Yaroslavl's Solovyov Hospital.

The crash comes on top of an already mournful year for the NHL in which three of the league's enforcers were found dead: Derek Boogaard, Rick Rypien and recently retired Wade Belak.

The cause of the crash was not immediately apparent, but Russian news agencies cited unnamed local officials as saying it may have been caused by technical problems.

More than 2,000 mourning fans wearing jerseys and scarves and waving team flags gathered in the evening outside Yaroslavl Lokomotiv's stadium to pay their respects. Riot police were also present as fans chanted sport songs in memory of the athletes.

Yaroslavl governor Sergei Vakhrukov promised the crowd that the Lokomotiv team would be rebuilt from scratch, prompting anger from some fans at a perceived lack of respect for the dead.

Russia was hoping to showcase Yaroslavl as a modern and vibrant city this week at an international forum attended by heads of state, including Russian President Dmitry Medvedev, so the crash came as a particularly bitter blow.

In recent years, Russia and the other former Soviet republics have had some of the world's worst air traffic safety records. Experts blame the poor safety record on the age of the aircraft, weak government controls, poor pilot training and a cost-cutting mentality.

The plane that crashed Wednesday was built in 1993 and belonged to a small Moscow-based Yak Service company.

Swarms of police and rescue crews rushed to Tunoshna, a ramshackle village with a blue-domed church on the banks of the Volga River 10 miles (15 kilometers) east of Yaroslavl. One of the plane's engines could be seen poking out of the river and a flotilla of boats combed the water for bodies. Divers struggled to heft the bodies of large, strong athletes in stretchers up the muddy, steep riverbank.

Resident Irina Prakhova saw the plane going down, then heard a loud bang and saw a plume of smoke.

"It was wobbling in flight, it was clear that something was wrong," said Prakhova, who said she was on her way to a local pump to collect buckets of water. "I saw them pulling bodies to the shore, some still in their seats with seatbelts on."

Lokomotiv Yaroslavl is a leading force in Russian hockey and came third in the KHL last year. It was also a three-time Russian League champion in 1997, 2002 and 2003.

McCrimmon, who took over as coach in May, was most recently an assistant coach with the Detroit Red Wings, and played for years in the NHL for Boston, Philadelphia, Detroit, Hartford and Phoenix.

The KHL is an international club league that pits together teams from Russia, Belarus, Kazakhstan, Latvia and Slovakia.

A cup match between hockey teams Salavat Yulaev and Atlant in the central Russian city of Ufa was called off midway after news of the crash was announced by Kontinental Hockey League chief Alexander Medvedev. Russian television showed an empty arena in Ufa as grief-stricken fans abandoned the stadium.

"We will do our best to ensure that hockey in Yaroslavl does not die, and that it continues to live for the people that were on that plane," said Russian Ice Hockey Federation President Vladislav Tretyak.

Tomas Kral, the president of the Czech ice hockey association, was shocked to hear the news.

"Jan Marek, Karel Rachunek, and Josef Vasicek contributed greatly to the best successes of our ice hockey in the recent years, first of all to the golden medals at the world championships in 2005 and 2010," Kral said. "The were excellent players, but also great friends and personalities. That's how we will remember them."

Medvedev has announced plans to take aging Soviet-built planes out of service starting next year. The short- and medium-range Yak-42 has been in service since 1980 and about 100 are still being used by Russian carriers.

In June, another Russian passenger jet crashed in the northwestern city of Petrozavodsk, killing 47 people. The crash of that Tu-134 plane has been blamed on pilot error.

In past plane crashes involving sports teams, 75 Marshall University football players, coaches, fans and airplane crew died in Huntington, West Virginia, on Nov. 14, 1970, on the way home from a game. Thirty-six of the dead were players.

Thirty members of the Uruguayan rugby club Old Christians were killed in a crash in the Andes in 1972.

In 1979, a plane heading from Soviet republic of Uzbekistan to Minsk carrying the Pakhtakor Tashkent soccer team collided mid-air with another passenger plane, killing 178 people. Seventeen members of the Pakhtakor team were killed.

The entire 18-member U.S. figure skating team died in a crash on their way to the 1961 world championships in Brussels.

A plane crash in 1950 near the Russian city of Sverdlov, now called Yekaterinburg, claimed the lives of 13 players and officials in the air force's ice hockey squad, while the Munich air crash of 1958 cost eight Manchester United players their lives.