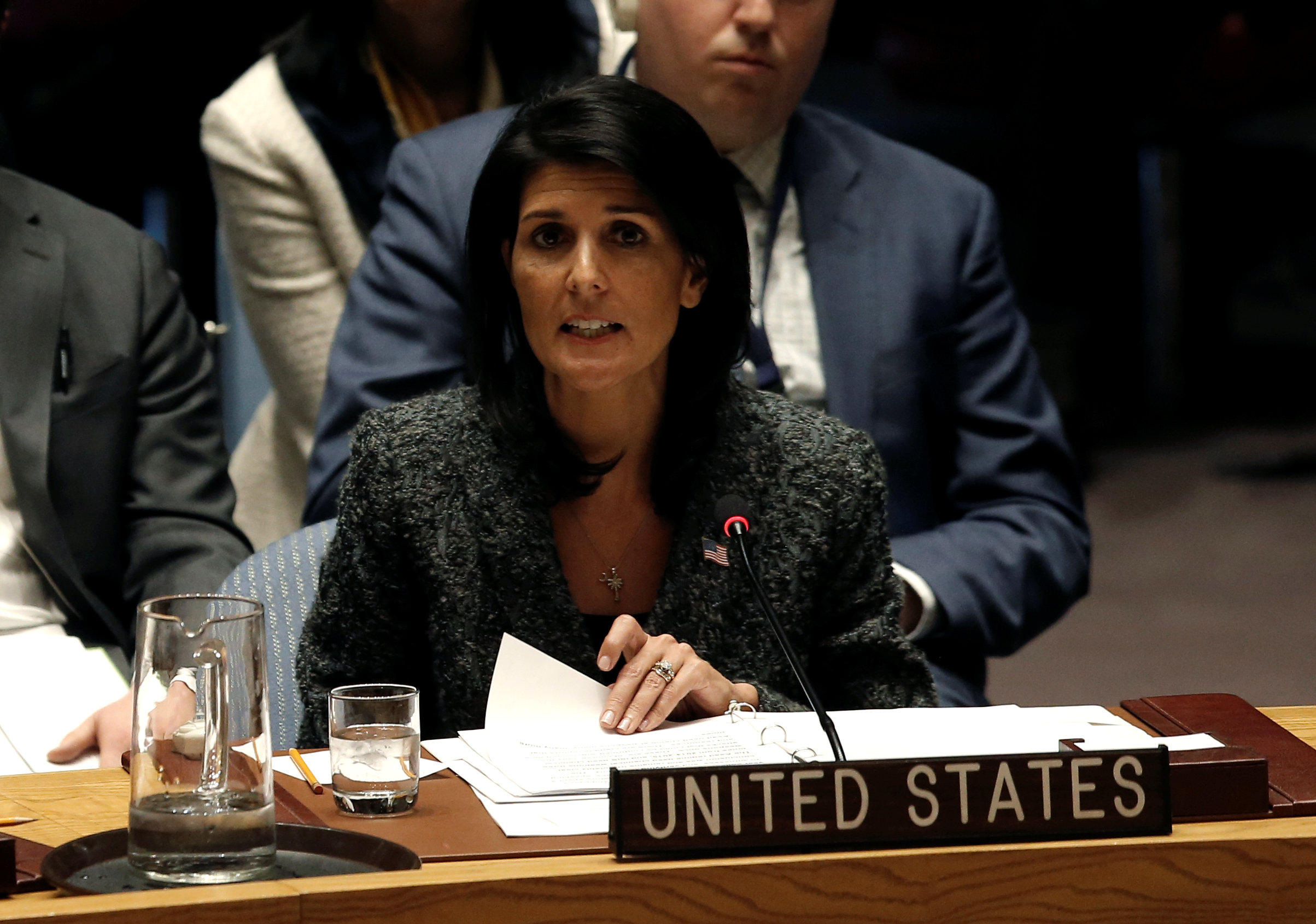 UNITED NATIONS -- Russia and China vetoed new U.N. sanctions on Syria Tuesday and the U.S. ambassador accused both countries of refusing to hold President Bashar Assad’s regime accountable for the use of chemical weapons.

“They put their friends in the Assad regime ahead of our global security,” new American envoy Nikki Haley told the U.N. Security Council after the vote. “They turned away from defenseless men, women and children who died gasping for breath when Assad’s forces dropped their poisonous gas.”

The Trump administration recently joined France and Britain in sponsoring the resolution, and Haley minced no words in denouncing the “outrageous and indefensible choice” that Russia and China made on Tuesday. President Trump had warm words for Russian President Vladimir Putin while campaigning but Haley has now criticized Russia over its annexation of Ukraine’s Crimea peninsula as well as Syria.

The defeated resolution was drafted following a joint investigation by the United Nations and the international chemical weapons watchdog that determined the Syrian government was behind at least three attacks involving chemical weapons, and that the Islamic State of Iraq and Syria (ISIS) had also used used them.

CBS News foreign affairs analyst Pamela Falk notes that Tuesday’s veto was the seventh time Moscow has blocked a resolution to protect its ally Bashar Assad from international condemnation. Had the resolution passed, it would have banned the supply of helicopters to the Syrian government as well as blacklisted Syrian military commanders.

But Russia’s deputy U.N. ambassador Vladimir Safronkov said after the vote that Moscow let it be known early on that it was “skeptical” of the JIM’s reports and the “uncorroborated nature of the conclusions.” He stressed that there was “no convincing evidence” to determine who was responsible for using chemical weapons.

Safronkov also pointed to the divided Security Council vote saying many council members have questions about the JIM’s conclusions and the resolution. It got the minimum nine “yes” votes on Tuesday but in addition to China and Russia, Bolivia voted “no” and three countries abstained -- Egypt, Ethiopia and Kazakhstan.

Addressing the three Western sponsors, Safronkov said: “You decided on provocation when you knew well in advance our position.” He stressed that the only way to resolve the Syrian conflict, now in its sixth year, is through cooperation -- “and it’s high time we do so.”

Earlier Tuesday, Putin said Russia will oppose any new sanctions against Syria “because it wouldn’t help the negotiation process but only hamper it and undermine confidence as the process of negotiations is under way.”

Haley, the U.S. ambassador, said Russia and China sat through nearly a year of briefings by the JIM investigators and never objected “but now, they suddenly say the investigation just wasn’t enough.”

Referring to “my friends in Russia,” Haley added, “it is a sad day in the Security Council when members start making excuses for other member states killing their own people.”

“The world is definitely a more dangerous place,” she said. “Today, the international community can look no further than the Security Council for contributing to that.”

She said the United States has already put the 21 individuals, companies and organizations targeted for U.N. sanctions in the defeated resolution on the U.S. sanctions blacklist and will urge the European Union and other countries to follow suit.

Haley also said ISIS’ use of chemical weapons adds to the U.S. determination to defeat the extremist group.

“But ISIS’ barbarity is no excuse for Assad’s barbarity,” she said, using an acronym for the militant group. “Both use chemical weapons. Both should face the consequences.”

A chemical weapon attack on a Damascus suburb that killed hundreds of civilians on Aug. 21, 2013, led to a U.S.-Russian agreement and a Security Council resolution the following month that ordered the destruction of Syria’s chemical weapons, precursors and the equipment to produce the deadly agents. Council members also pledged to take further measures if chemical weapons were used.

While insisting it did not stage the attack, the Syrian government supported the resolution and joined the chemical weapons watchdog known as the Organization for the Prohibition of Chemical Weapons, warding off possible U.S. military strikes.

Syria’s declared stockpile of 1,300 metric tons of chemicals has been destroyed, but the OPCW is still investigating outstanding questions about possible undeclared chemical weapons.

Syria’s deputy U.N. ambassador Mounzer Mounzer told the council his government opposes any use of weapons of mass destruction and said the JIM report is based on “fabricated eyewitness accounts drawn from terrorist groups” supported by the U.S., France and Britain.

“Today, what we see is that the three states in question have proposed this draft resolution simply so as to protect the nuclear and biological stockpiles of Israel,” he said.

“We regret this veto, which is inconsistent with Russia’s previous policy on chemical weapons and not in harmony with Russia’s apparent effort to achieve a political solution in Geneva,” he said in a statement.