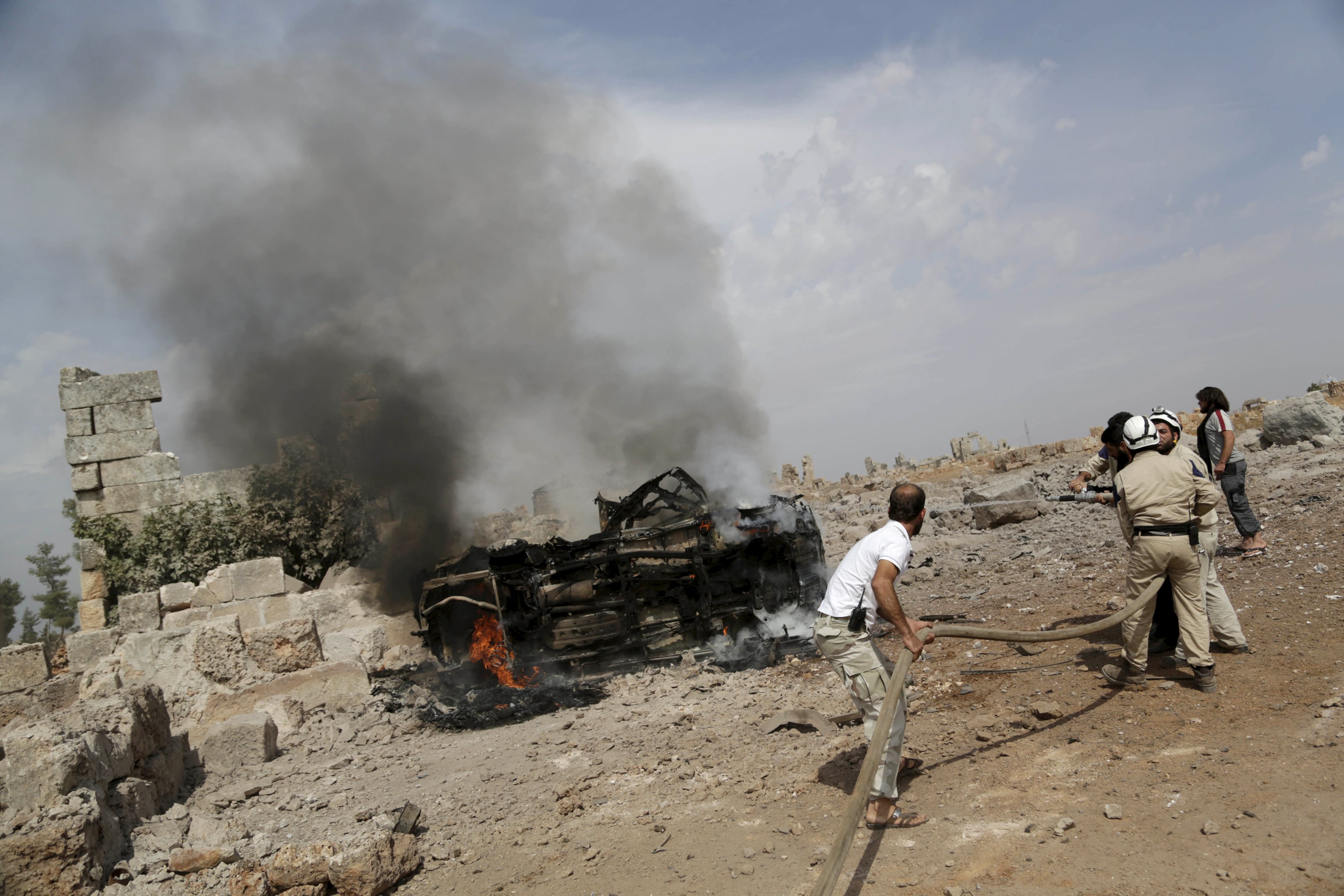 MOSCOW -- Russian jets carried out a second day of airstrikes in Syria Thursday, but there were conflicting claims about whether they were targeting Islamic State of Iraq and Syria and al Qaeda militants or trying to shore up the defenses of President Bashar Assad.

As concerns grew about a conflict that has now drawn in warplanes from the world's two most powerful militaries, Russian President Vladimir Putin denied reports that civilians were killed in any Russian airstrikes.

"We are ready for such information attacks," he said in a live broadcast from the Kremlin. "The first reports of civilian casualties came even before our jets took off."

As CBS News correspondent Holly Williams notes, the circumstances have led to an extremely dangerous situation, with the U.S. and Russia conducting airstrikes at the same time in Syria, but backing different sides in the country's complicated civil war.

Russian Foreign Minister Sergey Lavrov said his country and the U.S.-coalition "see eye-to-eye" on the targets of the fight in Syria and that the first military contact between Russia and the U.S. would take place "very, very soon." He added that "we believe that our position is absolutely in line with international law."

Russian jets appeared to be primarily bombing central and northwestern Syria, strategic regions that are the gateway to Assad's strongholds in the capital Damascus and the coast. The United States and allies fear that Russia, which has backed the Assad family since the current leader's father was in power, is using the air campaign as a pretext to go after anti-Assad rebels that include CIA-backed groups.

McCain, who chairs the Senate Armed Services Committee, told CNN he "can absolutely confirm to you that they were strikes against our Free Syrian Army, or groups that have been armed and trained by the CIA, because we have communications with people there." However, he later said the claim was based on published reports.

Morell told "CBS This Morning" co-host Charlie Rose on Thursday that the Russian leader was trying "to prop up Assad ... because he really believes that if Assad falls, there will be more instability in Syria, giving more running room to ISIS, maybe even having ISIS in Damascus."

"He's absolutely right that if Assad leaves tomorrow with no follow-on government, then you're in a Libya kind of situation with chaos. But the U.S. plan all along is a transition from Assad to another government. That's what we have to have. That's the only solution here, and Putin has just made that much more difficult."

Russian Defense Ministry spokesman Igor Konashenkov said Russian aircraft damaged or destroyed 12 targets in Syria belonging to ISIS including a command center and two ammunition depots. Officials acknowledged, however, that other unidentified groups were being targeted as well.

Konashenkov said Russian Su-25M and Su-25 jets flew 20 sorties between Wednesday and Thursday morning. He insisted that civilian areas were not targeted.

The Britain-based Syrian Observatory for Human Rights said airstrikes in the central province of Hama on Thursday hit locations of the U.S.-backed rebel group Tajamu Alezzah, as well as the province of Idlib, which is controlled by a coalition of rebel groups that include al Qaeda's affiliate in Syria, Jabhat al-Nusra.

Russia's air campaign in support of Syrian government forces began Wednesday in what Putin called a pre-emptive strike against militants. Putin's spokesman, Dmitry Peskov, said Russia was going after ISIS militants as well as a "list" of other groups.

"These organizations are well known and the targets are chosen in coordination with the armed forces of Syria," he said Thursday, without specifying.

Hundreds of Muslim Chechens and Central Asian fighters have joined the battles in Syria since the early days of the civil war, and many form the backbone of al-Nusra and ISIS. Some of those Chechen extremists are part of the coalition that controls Idlib.

Putin has said Russia would be fighting "gangs of international terrorists." The Syrian government considers all rebel groups terrorists.

In Paris, Russian Ambassador Alexander Orlov insisted that Russian warplanes in Syria were hitting at the same extremists targeted by the U.S. and denied American claims that its military failed to coordinate the airstrikes.

Orlov said the targets were installations for ISIS and Jabhat al-Nusra, "two terrorist organizations recognized as such."

The U.S. and Russia agree on the need to fight ISIS but not about what to do with Assad. The Syrian civil war, which grew out of an uprising against the longtime leader, has killed more than 250,000 people since March 2011 and sent millions fleeing elsewhere in the Middle East and Europe.

With American and allied airstrikes daily, and now Russian warplanes in the Syrian airspace, the war is taking on a dangerous new dimension.

Orlov said Russian officials warned the Americans "via confidential channels" of where they planned to strike. He also noted a coordination center was being set up in Baghdad that would include Syrians, Iraqis, Iranians and Russians - and any other country that wants to participate.

Khaled Khoja, head of the Syrian National Council opposition group, said at the U.N. that Russian airstrikes in four areas, including Talbiseh, killed 36 civilians, with five children among the dead. The claim could not be independently verified.

The ministry's spokeswoman, Marzieh Afkham, said the "Islamic Republic of Iran considers military action by Russia against armed terrorist groups to be a step toward fighting terrorism and toward resolving the current crisis" in Syria.

Her statement was carried by the official IRNA news agency.