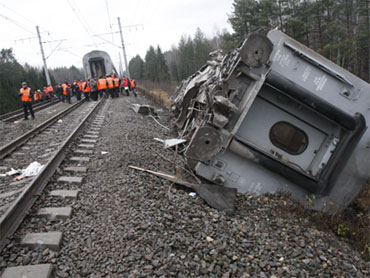 A homemade bomb was planted on the tracks of the high-speed Moscow-to-St. Petersburg train route, causing a derailment that killed at least 26 people and injured dozens more, Russian officials said Saturday as they opened a terrorism investigation.

The head of Russia's Federal Security Service, Alexander Borotnikov, said an improvised explosive device equivalent to 15 pounds of TNT had detonated when the train passed over it Friday night about 9:30 p.m. Remains of the device were found at the site of the crash, Borotnikov said.

"Indeed, this was a terrorist attack," the Interfax news agency cited Vladimir Markin, a spokesman for federal prosecutors, as saying. He told the ITAR-Tass news agency the bomb crater on the track was 5 feet deep.

The derailment of the upscale train, which was popular with government officials and business executives, was Russia's deadliest terrorist strike outside the volatile North Caucasus region in years.

The force of the derailment crumpled several cars in a remote rural area, trapping some injured passengers in the wreckage for hours and scattering luggage and metal pieces across the track. As of late Saturday, authorities still said 18 people were unaccounted for.

A second explosive device partially detonated Saturday during the clear-up operation near the disaster site, according to the head of Russian Railways, Vladimir Yakunin.

The last three carriages of the 14-car Nevsky Express careered off the tracks Friday night as the train approached speeds of 130 mph, officials said. More than 650 passengers and staff were on the train when it derailed near the border of the Novgorod and Tver provinces, some 250 miles northwest of Moscow and 150 miles southeast of St. Petersburg.

Reports on the death toll varied.

Health Minister Tatyana Golikova said at least 26 people were killed, 18 were missing and nearly 100 were injured and hospitalized in the derailment. The Prosecutor General's office said the death toll had risen to 30, with 60 others in the hospital.

There have been no credible claims of responsibility.

But sketches were being composed of several suspects, Interior Ministry head Rashid Nurgaliyev told Interfax, including of a man with ginger hair who is about 40 years old.

Witness accounts appeared to back up reports of a bomb blast.

"It was immensely scary. I think it was an act of terrorism because there was a bang," passenger Vitaly Rafikov told Channel One state television. He said he helped with the rescue, hauling victims from the wreckage and lighting fires for warmth.

Passenger Igor Pechnikov was in the second of the train's three derailed cars.

"A trembling began, and the carriage jolted violently to the left. I flew through half of the carriage," he said.

Terrorism has been a major concern in Russia since the 1991 collapse of the Soviet Union, as Chechen rebels have clashed with government forces in two wars and Islamist separatists continue to target law enforcement officials.

Amid the reports of terror, President Dmitry Medvedev called for calm.

"We need there to be no chaos, because the situation is tense as it is," he said.

The injured were transported to hospitals in Moscow and St. Petersburg by bus, train and even helicopters, but some said the evacuation was agonizingly slow.

Yekaterina Ivanova, a wounded passenger, told the NTV television network that workers took at least four hours to get her out of the train.

"In the hospital, the doctors are better, the medical teams are working in harmony," she said. "The young people from the Ministry of Emergency Situations carried us out on stretchers, but other people in uniform were just standing there and staring, and no one was even helping to carry out the wounded."

Police and prosecutors swarmed over the disaster site Saturday and restricted access to the bomb crater. Rescue workers scoured the wreckage, searching for the missing, as two huge cranes lifted up pieces of twisted metal.

A battered railway carriage lay on its side across the tracks, while baggage and metal debris were scattered in the mud. Emergency workers wrapped up in blankets and huddled around fires as a light rain started to fall.

Their efforts came to a halt after the second explosion was heard, forcing Russia's security services to close rail links between the two main cities that had been partially reopened, Yakunin said.

Military analyst Pavel Felgenhauer told APTN that Islamist separatists who operate in the North Caucasus and nationalist groups would naturally fall under suspicion.

One prominent nationalist group, the Movement Against Illegal Immigration, issued a denial of responsibility Saturday. Nationalists were blamed in a similar blast that caused a derailment along the same line in 2007, injuring 27 passengers. Authorities arrested two suspects in the 2007 train blast and are searching for a third - a former military officer.

Across Russia's North Caucasus region, attacks are relatively frequent. In August, a suicide bombing of a police station in Ingushetia's capital killed 25 people and injured 164. A September 2004 attack on a school in the North Ossetian town of Beslan ignited a three-day hostage-taking ordeal in which more than 330 hostages were killed in a botched rescue. In addition, a December 2003 suicide bombing of a train near Chechnya killed 44 people.

But outside the volatile southern region, the last fatal terrorist attacks occurred in August 2004. A suicide car bombing in Moscow that month killed 10 people only days after bombs ripped through two passenger aircraft, killing more than 80 people. Those attacks were blamed on Chechen rebels, as was a February 2004 Moscow subway bombing that killed 40 people.

A 2002 hostage-taking at a Moscow theatre ended with the deaths of around 130 people.

Another train derailment in June 2005 left at least 12 injured on a train that had been travelling from Chechnya to Moscow.
By Associated Press Writers David Nowak and Ivan Sekretarev; AP writers Steve Gutterman and Douglas Birch contributed to this report