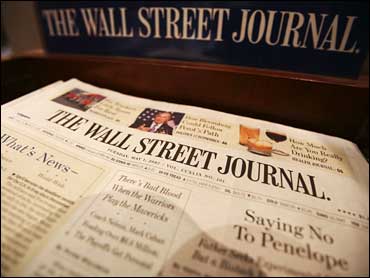 
Should liberals be rooting for Rupert Murdoch to roust control of The Wall Street Journal and Dow Jones from the Bancroft family? The answer could very possibly be yes. Same for conservatives, by the way.

Of course, the party line is that Murdoch would make the Journal's news pages as right-wing as its editorial pages are now, gut its classy news operation and create a cable news behemoth that would wash the national brain clean of all that is good and righteous. Many journalists who aren't at all liberal think a successful Murdoch putsch on Mt. Dow would be a lethal blow that would lead to the inexorable fall of high-minded American journalism.

Here's the counter-argument: There may be far more sinister villains than Rupert Murdoch lurking in the dark. And they might have nice sounding names, like Private Equity. These villains might want to get quaint anachronisms like the Journal, The New York Times and the Washington Post out of the news business altogether.

In other words, there is a very real possibility that the competing scenarios for the future of the journalism business are between low news and no news. I'll take low news — if that's the choice.

Unless you've cut yourself off from all news sources and are reading this by sheer accident, you know that newspaper circulations are shrinking, as are our audiences for broadcast and cable news. Internet news consumption is growing, but not as fast as it was last year and the year before. More important: No one has figured out how to make money with online journalism, including my commanders.

There are more media than ever before, and even more news. That is not the problem, which is that there is less real reporting. Instead there is more processing, more reliance on wire services, more argu-tainment news, more talk about the news and more commentary like this. Reporting is expensive and the profits margins are low.

Increasingly, capital is trying to get out of news and not into it, especially newspapers. Few moguls have been able to make serious money off of news in recent years, with Murdoch being a rare exception. So Murdoch is a successful newsman who wants to deploy more capital in the news business. For a business that's walking the plank, that may be one of few alternatives.

Investors of private equity are also interested in the news business and in the "media." Real estate tycoon Sam Zell recently made a deal to buy the Tribune Corp. Other private equity outfits were in the bidding. Their interest, we must assume, is not altruistic. Media and news companies can still generate enough cash to service the debt that private equity relies on while it makes real money on asset sales and more "efficient" operations. Contrary to what the term implies, private equity can be every bit as short-term and short-sighted as public equity.

The acknowledged beacons of quality in American print journalism are three newspapers still controlled by families — the Journal, The Washington Post and The New York Times. It is probable, perhaps obvious, that these papers remain superior precisely because they are slightly less vulnerable to the vagaries that plague many other publicly traded companies. They have owners who think and operate on a long horizon; they believe in quality and craft. The three television networks were in a similar position until the late 1980s.

Family control of two of those newspaper companies, the Journal and the Times, is now being challenged. In a wicked twist of fate, Post publisher Donald Graham wrote an op-ed piece in The Wall Street Journal last week defending the Sulzberger family's efforts to keep control of the Times in the family — and keep it away from private equity and other predators! What he wrote of the Times is true of the Post, the Journal, CBS News and every other news company.

Who would bid the highest? Perhaps a principled owner, dedicated to the welfare of the Times and the Boston Globe; willing to anger its friends on a regular basis, as good newspapers do; and prepared to spend money and run other risks to sustain the paper like the Sulzbergers. Or maybe the bidder would be someone quite different.

It isn't guaranteed that anyone owning the Times would spend more than $200 million on its newsroom budget, or deploy dozens of foreign correspondents around the world. Sending any one of those reporters overseas costs lots of money and doesn't add a penny to this year's circulation or advertising revenue. The Times sent them abroad in the belief that, in the long term, the paper would mean more to its unusual set of readers if it gave them an extensive report on the world and the country.

In this environment, Rupert Murdoch is not the deadliest shark. Sorry if that offends.

My doomsday scenario aside, I am still hoping that Dow Jones stays independent and idiosyncratic.

At some point, our industry must realize something that the investors seem to know: News has less value in America than it once did.

Why is that? One possible answer is that we haven't kept up and have increasingly offered the public shoddy and uninspired products. Another answer is the public has changed, that communities have changed ways that make "news" less important, that our historical and cultural literacy has changed. And some would say all this is good, that news has gone "micro" — so there is a Web site or a blog or a wiki for every possible flavor of news consumer.

Rupert Murdoch's News Corp. may have a slightly better chance of enhancing the social and cultural worth of news in America than a consortium of mercenary investors. But I think the little guys have a much better chance —even if, in today's world, Dow Jones is the little guy.

2020 Election Live Updates: "If Florida goes blue, it's over," Biden says as he and Trump campaign in Florida