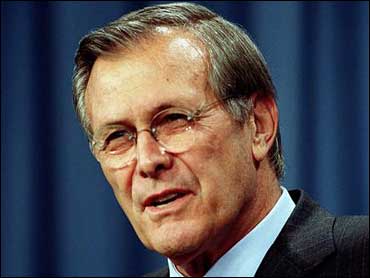 Defense Secretary Donald Rumsfeld says any bolstering of U.S. forces in the region near the Korean Peninsula should reassure allies.

Rumsfeld says it should demonstrate that the U.S. military has the capability to be in a variety of different places, not just preparing for a possible war in Iraq.

He acknowledges he has signed an order to have some Air Force fighters ready to deploy within a few hours' notice and fly to the Pacific island of Guam.

However, the chairman of the Joint Chiefs of Staff says the U.S. and South Korean forces already in position are "pretty substantial."

Washington says deployments would act to deter any North Korean aggression during any war against Iraq, and U.S. officials are trying to shift the North Korean matter to the U.N. Security Council.

But in Moscow, Russian Foreign Ministry spokesman Alexander Yakovenko said the United States would only deepen the tension with North Korea by beefing up its military might in the region, where it already has a powerful presence. Russia has close ties with North Korea.

North Korea responded sharply to the reported U.S. moves. "In an attempt to crush us to death, the U.S. military is scheming to beef up forces in Japan and South Korea," said the North's Central Radio, monitored by South Korea's Yonhap news agency.

Gen. Leon J. LaPorte made his statement after U.S. officials in Washington said U.S. Defense Secretary Donald H. Rumsfeld is considering sending an aircraft carrier to the waters off the Korean Peninsula and adding bombers in Guam.

In Washington, Deputy Secretary of State Richard Armitage said he had no doubt the United States and North Korea will open a dialogue.

"Of course we're going to have direct talks with the North Koreans," Armitage told a Senate Foreign Relations Committee hearing on Tuesday.

But underlining all the diplomatic tiptoeing is a more pragmatic reality, analysts say — the potentially devastating backlash of a surgical bombing of the North.

"Even if the U.S. uses a pinpoint strike, North Korea would retaliate on a much more massive scale," said Paik Hak-soon, of the Seoul-based Sejong Institute think tank. "It is a very, very dangerous option with a high probably of another Korean War."

LaPorte's statement indicated that there would no immediate change in his troop level, which currently stands at 37,000.

"We did not request additional forces," LaPorte said in response to a question from South Korean media. "If we do, we will consult with the (South Korean) Ministry of National Defense and then refer to the Pacific Command."

LaPorte did not respond to U.S. media reports that the Pentagon has decided to dispatch additional B-1 bombers and F-16 fighter jets to the western Pacific in a show of force against North Korea.

"We at (U.S.-South Korea) Combined Forces Command continually monitor all situations on the peninsula and maintain a readiness level to ensure deterrence and preserve the peace of the Korean Peninsula," he said.

In Vienna, the U.N. International Atomic Energy Agency confirmed that its 35-nation board of governors will meet Feb. 12 to discuss the nuclear standoff.

The meeting could refer the dispute to the Security Council. But Russia, which like the United States has a seat on the board, came out against such a step Tuesday.

"As before, we still believe that the possibility for diplomatic dialogue between the interested sides is not exhausted," Russia's Interfax news agency quoted Yakovenko as saying.