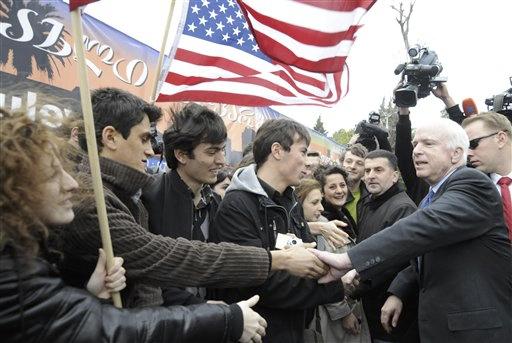 Amid calls for his resignation, Defense Secretary Donald H. Rumsfeld drafted an apology Friday for not keeping Congress informed about abuses of Iraqi prisoners in U.S. custody, defense officials said.

He planned to deliver the apology in a congressional appearance demanded by angry lawmakers. Rumsfeld also was expected to call for formation of an independent commission to look into the abuses and how the Defense Department handled them, one Pentagon official said on condition of anonymity.

The international Red Cross said Friday it had warned U.S. officials of abuse of prisoners in Iraq more than a year ago. A Red Cross report from earlier this years said the abuse of some Iraqi prisoners was "tantamount to torture" and some abusive practices may have been accepted by the U.S.-led coalition.

CBS News will broadcast a Special Report and CBSNews.com will provide a Live Webcast of Secretary Rumsfeld's testimony to the Senate Armed Services Committee.
Coverage begins at 11:45 a.m. ET
Leading Republican committee chairmen tried Friday to hold off a rush to judgment of Rumsfeld, but some top Democrats were clamoring for his resignation over the abuse of Iraqi prisoners by U.S. soldiers.

And The New York Times seconded those demands with a Friday editorial headlined "Donald Rumsfeld Should Go."

On Thursday, President Bush gave his embattled Defense secretary a vote of confidence. Mr. Bush told reporters in the White House Rose Garden on Thursday that Rumsfeld had done a good job during two wars and would stay in his Cabinet.

Rumsfeld spent the day Thursday with aides preparing for his appearance. It was a day when a new cache of photographs surfaced and Mr. Bush offered an outright apology to the Iraqi prisoners and their families.

Sen. Pat Roberts, the chairman of the Intelligence Committee, told the CBS News Early Show it would be premature to call for Rumsfeld's resignation, "but the secretary does have a lot of questions to answer."

Sen. Carl Levin, the top Democrat on the Armed Services committee, told the Early Show, "People have got to be held accountable, that accountability has got to go right up the chain. It's not just the people who perpetrated the despicable conduct."

The photos have led to criminal charges against six soldiers and administrative findings against seven others. Mr. Bush, Rumsfeld and other officials have insisted the abuse at Abu Ghraib prison in Baghdad were criminal acts by a few soldiers.

In excerpts of the Red Cross report, printed by the Wall Street Journal, the agency said abuse was not systematic for most prisoners, but it was systematic for those held for intelligence reasons, the report found.

Those prisoners "were at high risk of being subjected to a variety of harsh treatments … which in some cases was tantamount to torture, in order to force cooperation with their interrogators," it read.

The report was sent to the United States in February but represented a summary of the information given to U.S. authorities the previous year, Pierre Kraehenbuehl, director of operations for the International Committee of the Red Cross, told a news conference.

He said the abuse of prisoners represented more than isolated acts, and that the problems were not limited to the Abu Ghraib prison

"We were dealing here with a broad pattern, not individual acts. There was a pattern and a system," he said.

The Journal said that the 24-page report described prisoners kept naked in total darkness in empty cells at Abu Ghraib prison and male prisoners forced to parade around in women's underwear. Coalition forces also fired on unarmed prisoners from watchtowers, killing some of them.

In another episode, nine men were arrested in Basra and beaten severely, leading to one death, it added.

The U.S. is reviewing 14 deaths of people in its custody in Iraq and Afghanistan.

Some of the abuse has been blamed on troops, but private contractors working for the CIA have also come under fire.

Torin Nelson, a former interrogator working for the pirvate firm CACI international, tells Britain's Guardian newspaper that even "cooks and truck drivers" were used to interrogate prisoners, and that many detainees are "innocent of any acts against the coalition".

The contract with CACI International Inc. is one example. Pentagon officials said Thursday they have not determined which agency oversees the contract.

An in Iraq, radical Shiite cleric Muqtada al-Sadr denounced the abuse of Iraqi detainees, dismissing Mr. Bush's apology and demanding Friday that the American soldiers charged with abuse be tried in Iraqi courts.