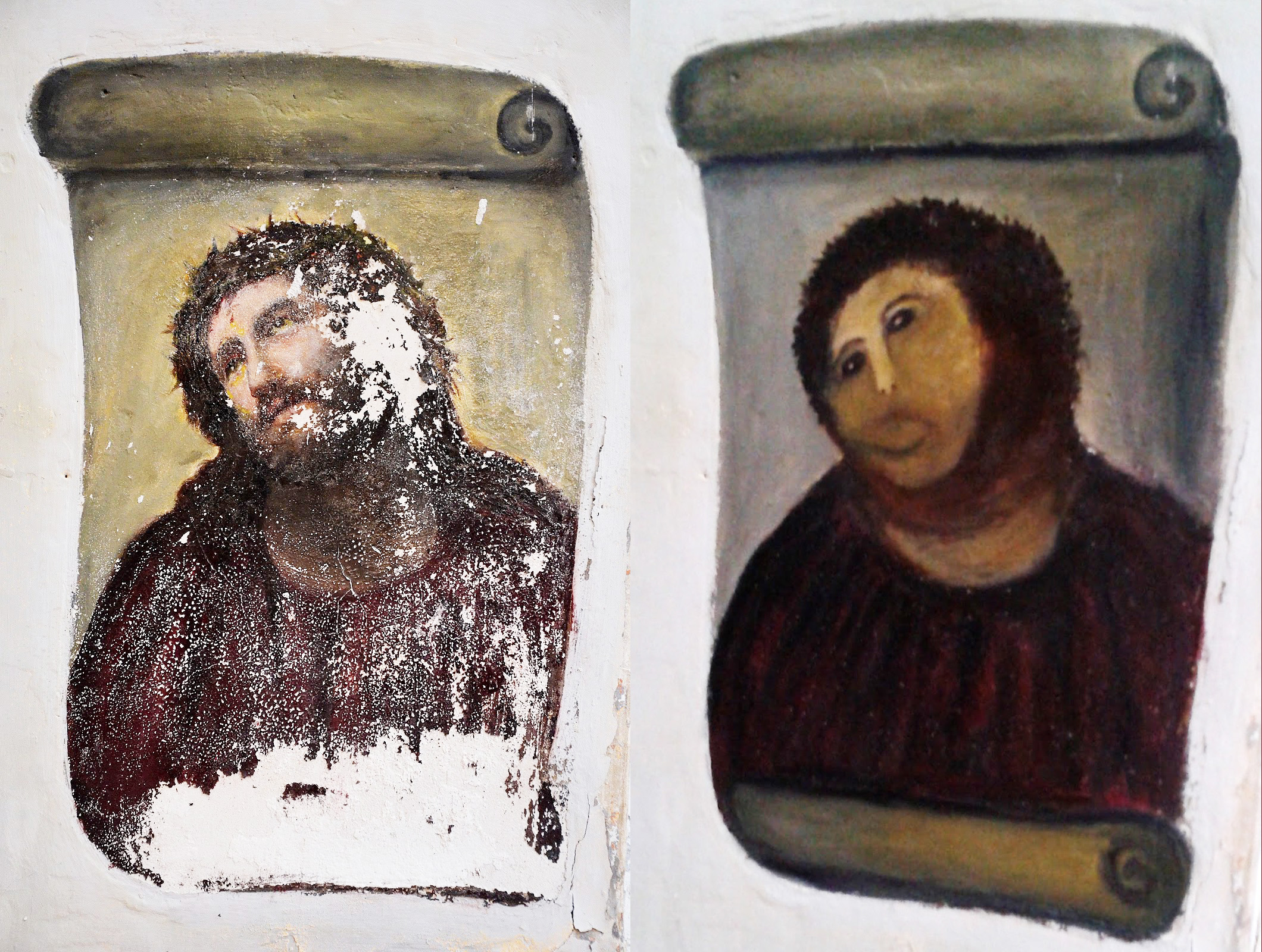 (CBS News) Perhaps beauty is really in the eye of the beholder.

A centuries-old fresco of Jesus Christ that was botched by a well-intentioned elderly woman has drawn hundreds of visitors and reporters to a north-eastern Spanish church - a positive push in tourism for the small town.

The "ecce homo" (or "behold the man"), painted by famous Spanish artist Elias Garcia Martinez, is now mockingly - if not affectionately - called "ecce mono" ("behold the monkey") after an 81-year-old Cecilia Jimenez of Borja tried to fix the deteriorating fresco by applying a paint brush.

Mayor Francisco Miguel Arilla was shocked at the amount of attention his town of 5,000 people was attracting. "It is amazing," he told Reuters in Spanish. "It is very hard to understand. We don't understand how something like this is over the world now. Argentine and American broadcasters have come and we can't understand it."

"The truth is that we should be thanking her because of how much it has helped catering trade in town. It is amazing," a resident of the town named Raquel told Reuters. "And up where the church is the same thing has happened. We were having economic problems and thanks to this woman we are recovering. They are crucifying her and, to be honest, I don't get it."

Art experts began visiting the Iglesia del Santuario de Misericordia on Monday to see what they can do to fix the 19th-century painting, but many visitors want to keep it as it is.

Over 20,000 people have already signed an online petition to keep the botched fresco, which BBC correspondent Christian Fraser described as "crayon sketch of a very hairy monkey in an ill-fitting tunic."

"The daring work ... reveals a subtle criticism of the Church's creationist theories while questioning a resurgence of new idols," reads the description on the Change.org petition.

Another visitor, Ramon Rubio, praised Jimenez for her art as well as the meaning it carried with it. "I love it, I love it," he told Reuters in Spanish. "I think what has happened is fantastic, this is almost a miracle. There was nothing left of the original picture before and this woman, with all her good intentions, has done something very big."

The fresco became an Internet sensation after the Center for Borja Studies announced that the painting had been ruined, releasing the shocking picture and prompting worldwide buzz.

Jimenez defensively told state-run TVE that the parish priest had authorized the deed when she expressed concern for the original, which was peeling away. "The priest knew! He did! How could we do something like that without permission? He knew," she said.

Where some saw horror, others saw humor. The painting inspired a series of internet memes, including a Twitter account with the description "Once a handsome fresco now a hedgehog."

The increase in tourism is a silver lining for Jimenez, who is reportedly recovering from an anxiety attack from all the media attention. According to the Guardian, neighbors and relative say the woman is overwhelmed and in bed.

For now, Jimenez's restoration continues to be a major, although unexpected, tourist attraction.

"The whole country is unemployed, so the best we can do is to come to the Aragon region to see the painting," a Borja resident, David, told Reuters in Spanish.