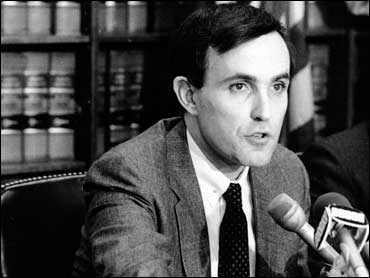 Rudy Giuliani clearly has a love/hate thing when it comes to the Mafia: celebrates the fictional characters, incarcerates the felonious ones, keeps mum about those in his own family tree.

The former federal prosecutor is both film buff and mob buster, still breaking out his raspy Don Corleone impression and quoting lines from "The Godfather" more than two decades after busting up the New York mob's ruling hierarchy.

But Giuliani spent a lot more time - he once estimated 4,000 hours - listening to the bugged conversations of real Mafiosi than channeling Marlon Brando's chipmunk-cheeked boss. And long before anyone heard of Tony Soprano (yes, Rudy's a fan), Giuliani was jailing "Fat Tony" Salerno after the 1986 "Commission" trial.

Giuliani's mob fascination - including a reported link in his own family - has already surfaced during the presidential campaign, although few expect much political fallout from the occasional "Godfather" parody. But it provides a glimpse into his career path from prosecutor to mayor to presidential candidate.

When he arrived as U.S. attorney in 1983, the chance to take on the mob was an offer Giuliani could not refuse.

While many Italian-American public figures avoided the word "Mafia," saying it reinforced stereotypes, Giuliani used it repeatedly at news conferences. "By using the word Mafia correctly," he insisted, "you actually help to end the unfair stereotype."

Giuliani's prosecutorial zeal led an attorney for Genovese boss Salerno to charge that Giuliani had "made it his personal mission to bury my client."

In addition to the "Commission" case, where the heads of New York's five Mafia families were indicted, Giuliani made his prosecutorial bones with the "Pizza Connection" case - a mob-bankrolled plan to import $1.6 billion in heroin through pizzerias.

The former two-term mayor's interest in the mob, as either movie patron or prosecutor, is unlikely to impact his presidential candidacy, said one political analyst. Voters are more likely to focus on his performance after the Sept. 11, 2001, terrorist attacks or his three marriages and the resultant fallout.

"The positive for Giuliani is 9/11," said pollster Maurice Carroll of Quinnipiac University. "The negative is the personal stuff."

A 2000 investigative biography revealed that Giuliani's love/hate deal with the Mafia included his own family: His father and uncle had Mafia ties. Uncle Leo D'Avanzo ran a loan-sharking and gambling operation out of a Brooklyn bar, and used his father Harold as muscle to collect unpaid debts, author Wayne Barrett reported.

According to the book, the two were involved in a shootout with a member of the mob on a Brooklyn street in the early 1960s over a loan-sharking dispute. D'Avanzo was partnered with a made man, Jimmy Dano, in their illegal business, Barrett wrote in "Rudy!"

The book said Giuliani's cousin Lewis D'Avanzo was a mob associate who ran a major car theft ring. It also says the FBI suspected that D'Avanzo - who went to school with Giuliani and attended the mayor's first wedding - was involved in several murders.

D'Avanzo was killed in Brooklyn by FBI agents in 1977 when he tried to run down an agent who had stopped him on a warrant for transporting 100 stolen luxury cars.

Among the book's claims is that the mayor's father spent a year and a half in Sing Sing prison for robbing a milkman at gunpoint in the 1930s - a decade before Rudy Giuliani was born.

"If anybody is discouraged for voting for Giuliani because they think of the mob, I think they should be locked up - for pure idiocy," he said.

Giuliani even cited the film as a blueprint for prosecutors.

"'The Godfather' is my favorite movie," Giuliani said at the time. "I watched the movie back in the '70s and probably it helped me a lot, in a lot of the plans that we put together for how to dismantle the five families in New York."

He later became a booster of "The Sopranos," the hit HBO series about a New Jersey-based mob family. "It's just a show," he said when Italian-American groups criticized the program for perpetuating ethnic stereotypes.

At an annual event put on by New York reporters in 2001, the then-mayor appeared as the cigar-chomping "Don Giuliani," accompanied by cast members from "The Sopranos." He reprised his bit solo at the 2004 Gridiron Dinner in Washington.

And he opened a California campaign speech this year in his Corleone voice; in April, he invoked a mob axiom in explaining why reporters should take it easy on his wife, Judith.

"She's a civilian, to use the old Mafia distinction," he said.

Giuliani has had to deal with another mob-related entanglement involving his former police commissioner, Bernard Kerik, whom he recommended to be the nation's homeland security chief. Kerik pleaded guilty last year to a misdemeanor for accepting gifts from a company reputedly linked to organized crime.

Giuliani's ventures into mob-speak are an issue that Italian-American groups have complained about to the candidate, said Dona De Sanctis, deputy executive director of the Order Sons of Italy in America.

"If Mr. Giuliani continued to do his Don Corleone imitation, that would offend and annoy a large number of Italian-Americans," she said. "We would prefer no jokes, please. It's not a laughing matter to us."

A Giuliani spokeswoman responded that he was "proud of his Italian heritage and has a record celebrating the country's culture and the important contributions Italian-American have made."

That group could include actor Tony Sirico, who played the menacing Paulie Walnuts on "The Sopranos" and recently endorsed Giuliani.

Anybody got a problem with that?