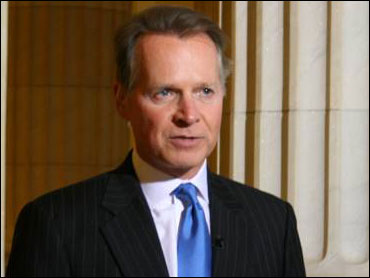 Political Players is a weekly conversation with the leaders, consultants, and activists who are shaping American politics. This week, CBS News' Brian Goldsmith talked with Rep. David Dreier (R-CA), a top Giuliani supporter, about MoveOn.org, health care, and whether a moderate can win the Republican presidential nomination.

CBSNews.com: Your candidate for president, Rudy Giuliani, got in the news this week and last for criticizing MoveOn. But what about the response that went out yesterday that he gave paid speeches and played politics rather than participate in the Baker-Hamilton commission?

David Dreier: The fact of the matter is, when he joined the Baker-Hamilton commission, it was in its early stages and he had a lot of other obligations that had already been met. He has demonstrated his bona fides on September 11th and his commitment to winning the global war on terror.

And he chose to resign from the commission. And that was his call. They said he was simply making speeches. He was working and he didn't feel that he had the time to put into the work of the commission.

And frankly, his private sector work has been focused on winning the war on terror.

CBSNews.com: Giuliani has criticized Hillary's health care plan, but columnist David Brooks says none of the Republicans have any serious health care plan at a time when the issue is, according to our latest CBS News poll, the public's third highest concern. What's your response to that?

David Dreier: My response is that Rudy Giuliani two months ago unveiled a sweeping market-oriented health care plan. The goal of universal insurance, having every American have health insurance, is a priority for us. And Rudy wants to see that happen.

The thing is, he is focused on quality of care. Last night, I had a conversation with one of my Democratic colleagues. He was talking about the need in a democracy to make sure that we have both education and health care for people.

And of course, we believe that they are essential. But we don't want to diminish quality of care. And that's the reason that we're so troubled with Hillary Clinton's plan. And that's why I believe that the plan unveiled by Rudy Giuliani which focuses on medical savings accounts, expanding those and creating better choice when it comes to health care, is in fact the way of the future. And I would recommend that my friend David Brooks take a close look at the details of the Giuliani health care plan.

CBSNews.com: So you think Mitt Romney's putting in an individual mandate in Massachusetts is the wrong model?

Since we have insurance right now handled on a state by state basis, I know it prevents people from being able to go online and get the best quality package that they can when it comes to health care. And I think that we need to open that up.

CBSNews.com: Giuliani's support seems to be slipping, according to our latest CBS News/New York Times poll. He's gone from 38% nationally to 27% in one month, from August to September. He's now only leading Fred Thompson by five points. What do you think has caused his support to diminish so much?

David Dreier: Well, I don't think his support has diminished. One of the things that we've recognized is that throughout this process, we knew all along that it was going to fluctuate. I think that if you take a poll after the report that you just talked about from the outset, the way he responded to General Petraeus and the advertising that MoveOn.org ran, I'm hearing from Republicans and Democrats all across the country and from many of my colleagues since Congress reconvened. They're saying, wow. The one person who stepped up to the plate and took this on is Rudy Giuliani.

CBSNews.com: Are you concerned that he's susceptible to more slippage in the polling because, as our survey showed, only 41 percent of voters actually know he's for abortion rights. Almost as many think he's against them. And that as more and more people become aware of his positions on these social issues, his support might drop?

David Dreier: I think that if you look at his record on the issues, his commitment to nominating strict constructionists to the bench, his opposition to the federal funding of abortion, I believe that people who are strongly pro-life who already support him will continue to. And I think we'll see those numbers go up.

CBSNews.com: As I've talked to a number of social conservative leaders, some of whom are supporters and some not, they keep coming back to the fact that he cross-dressed a lot as mayor of New York. And that when he was going through a divorce, he lived with an openly gay couple, that he supports gay rights. Do you think that will hurt him in Republican primaries?

David Dreier: I really don't. I mean, people know this guy was mayor of New York. The city was five to one, Democrat to Republican. And he has a great sense of humor. And you know, he is, from my perspective, very libertarian in his views, which I believe happens to be the core view that Republicans have.

He's made it clear that he believes marriage should be between a man and a woman. That's where he is on this. But he's a supporter of the notion of civil unions. George W. Bush is in that exact same position on this issue.

And I will say that the notion of cross dressing, good heavens. I mean, it was all a skit. I told people to relax a bit and realize that having someone who has a great sense of humor is a healthy good thing for our country.

David Dreier: Well, he's not running against President Bush. He's running to build on the record that President Bush has. And I think that if you look at his vision for reducing the size and scope of government, keeping economic growth going, I think that he's going to pick that up.

And frankly, while there is a sense of change and everybody is looking for the issue of change in Washington and all, we got change in last November's election. And the American people are suffering with buyer's remorse I believe when you look at Nancy Pelosi and the Democratic Congress.

CBSNews.com: And my final question is about your home state of California. It hasn't gone for a Republican for president since 1988. One of the arguments that a lot of supporters of Giuliani's use is that he would put states in play that Republicans couldn't compete in for a long time, like New Jersey and Connecticut on the East Coast, California on the West Coast. What do you think it is about Giuliani that makes a lot of people who voted Democratic in the past consider voting for him?

David Dreier: I describe it as a trifecta that he has. He's a man of ideas. And in his autobiography, he talks about the fact that, when he graduated from college, he talked about putting out a shingle saying "Philosophers At Large". He spends a lot of time thinking about ideas.

But also, he demonstrated that he's a leader. So, he's a man of ideas. A superb manager. And an inspiring leader. And those three things have attracted support of conservative Republicans all across the country. And he is the one who can in fact draw support from Democrats in California.


David Dreier has represented California's 26th Congressional District since 1981. He became Chairman of the powerful House Rules Committee in 1999 and temporarily assumed the responsibilities of House Majority Leader in 2005. He authored both the 1995 House reform package that followed the Republican take-over, and major ethics reform legislation in 2006. Dreier also served as California Gov. Arnold Schwarzenegger's campaign co-chair and head of his transition team.