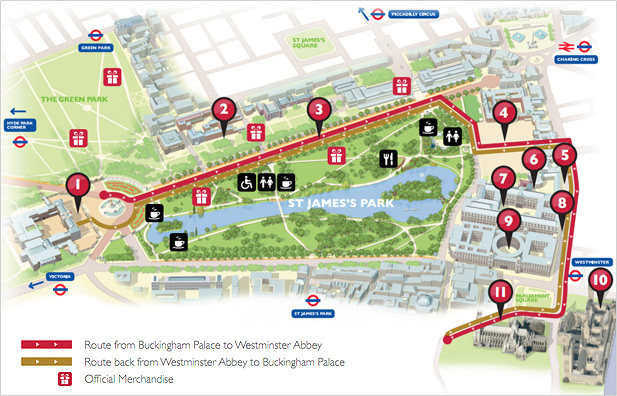 (CBS) All eyes will be on London on April 29, when Prince William and Kate Middleton will marry at Westminster Abbey.

The route that will bring Middleton to the Abbey and bring the royal couple back to Buckingham Palace, where celebrations will continue, is packed with some of the city's most historic and iconic sights.

Scroll down for more details on the procession route and what can be seen along it. To see an interactive map, visit The Royal Parks website.

Buckingham Palace has been the official London residence of the British monarchy since 1837. It boasts 775 rooms, including 19 state rooms, 52 bedrooms, 92 offices and 78 bathrooms. It is also the monarchy's administrative headquarters. The royal wedding reception will be held here.

Clarence House is the official residence of Prince Charles, the Duchess of Cornwall and Princes William and Harry. Built between 1825 and 1827, it is on The Mall, next to St. James' Palace, and shares the palace's garden.

The Mall, which stretches from Trafalgar Square to Buckingham Palace, will be the main route for the royal wedding procession. The road is a red color, giving the appearance of a red carpet leading up to the palace. The Mall was created as a ceremonial route in the early 20th century and is closed to traffic on Sundays, public holidays and ceremonial occasions.

Horse Guards Parade is a large parade ground off of St. James' Park. It is the site of the annual Trooping the Colour, which celebrates the monarch's official birthday, and Beating Retreat, a military ceremony. The Guards Memorial and The Royal Naval Division Memorial can both be seen here.

Completed in 2005 and dedicated by the Queen, the monument honors the role of women in the war effort during World War II. Located in Whitehall, it features 17 sets of clothing and uniforms representing the different jobs women undertook during the war. The lettering on the sides replicates the typeface used on wartime ration books.

Downing Street hosts the residences of Britain's most senior cabinet ministers. The Prime Minister's official residence is at 10 Downing Street, though recent leaders have chosen to live at No. 11. It's a short walk to both the Houses of Parliament and Buckingham Palace, and will be passed along the royal wedding procession.

The Foreign and Commonwealth Office is the government office responsible for promoting the United Kingdom's interests overseas. Designed by the architect George Gilbert Scott, the building was constructed between 1861 and 1868 and boasts ornate internal decorations. It has hosted important international ceremonies, including the signing of the Locarno Treaties in 1925.

The Cenotaph was originally designed to commemorate the victims of World War I, but was later adopted as a memorial to all fallen British servicemen. Designed by Sir Edwin Lutyens, it features a wreath on each end and the words "The Glorious Dead," chosen by Rudyard Kipling. It was constructed from Portland stone between 1919 and 1920 and is flanked on each side by flags of the United Kingdom.

Her Majesty's Treasury is the United Kingdom's economic and finance ministry. The building, often referred to as the Government Offices Great George Street, was designed by John Braydon and completed in 1917. The Treasury adopted it as its main headquarters in 1940. Overlooking St. James' Park, it will be passed during the procession.


HOUSES OF PARLIAMENT AND BIG BEN

The Palace of Westminster - also known as the Houses of Parliament - is the meeting place of the two houses of Britain's Parliament: the House of Lords and House of Commons. At the north end of the palace is the iconic clock tower, nicknamed Big Ben. To the east, it faces the River Thames and the London Eye. To the west, it faces Westminster Abbey, where the royal wedding ceremony will take place.

The Collegiate Church of St. Peter at Westminster, informally known as Westminster Abbey, will play host to the royal wedding ceremony. It has been the coronation church since 1066, and a number of monarchs are buried there. The present church was begun in 1245 by Henry III and has a long history as a venue for royal weddings, dating back to King Henry I of England in 1100.